Camera surveillance systems are helping decrease crime, but they come with a price. 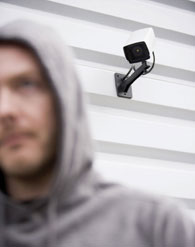 In 2008, a series of armed robberies targeting individuals occurred in a retail area of Chicago. To deal with the problem, the Chicago Police Department increased patrols in the area and used city cameras to watch for potential criminal activity.

During the first night of the operation, an officer monitoring one of the cameras saw a woman enter an ATM facility followed closely by a man. After he was seen running away from her and joining another man, the officer alerted the police close to the scene to detain the men, who, it turned out, had robbed the woman. The suspects were later implicated in five previous armed robberies.

Using cameras to stop or prevent crime is becoming more common in Chicago and other cities. With help from homeland security grants, cities are installing surveillance camera systems in public spaces to prevent crime and help solve criminal incidents. While success has been measurable for many cities, camera surveillance systems also have become controversial for many privacy advocates and, in some instances, the effectiveness of the systems has been questioned.

Chicago has built one of the most advanced citywide municipal camera surveillance systems in the country. The city has more than 6,000 surveillance cameras at schools, public transit stations, buses, trains and above streets.

“We use [our cameras] everyday as one of our crime-fighting strategies,” says Jonathan Lewin, commander of the Chicago Police Information Services Division. “This year, the Chicago Police Department conducted over 17,500 POD [police observation device] missions where police officers were looking for a crime with a camera.”

PODs are bulletproof boxes designed to deter crime not only by containing cameras, but by standing out in the cityscape, mounted high above streets. They are highly visible, large metal boxes marked by a flashing blue light, trademark Chicago Police checkerboard design and a Chicago Police Department emblem. PODs can record up to 150 feet away, day or night.

During Chicago’s first pilot program in 2003, in which 30 PODs were placed in high crime areas, serious crimes declined by 17 percent, while “quality of life crimes” declined by 46 percent. Narcotic-related calls declined by 76 percent, and narcotic arrests declined by 3.3 percent in areas with PODs but increased 151 percent in the police beats surrounding the areas monitored by PODs.

Now, Chicago’s PODs are used to identify crimes in progress or offenders, gangs loitering, narcotic operations and quality of life issues, such as drinking alcohol in public. They are also used for stings, to provide evidence of past crimes and in specialized POD missions.

Recently, Chicago linked its cameras to its Computer Aided Dispatch (CAD) system. Now, when a 911 call is received, Chicago emergency personnel can locate and view events within 150 feet of the nearest camera. The new system, paid for by a $6 million homeland security grant, also can connect to cameras at private sites like tourist attractions, office buildings and university campuses.

Hiring enough people to monitor its cameras has not been easy for Chicago, which has turned to volunteers for help. Chicago also has experimented with video analytic software that can identify predetermined criteria, such as a person loitering, an unattended backpack or a car in a restricted area. Once a potential problem is identified, the appropriate security personnel are notified. Analytic software also can be used to search previous video feeds for information.

To help cover the cost of using the technology, the city used a Transportation Security Administration (TSA) grant to incorporate video analytic software on key transit routes and their surroundings to identify such items as unattended packages, unoccupied vehicles and weapons. Chicago plans to expand its use of video analytics and wants to integrate the camera systems with computers in police cars and PDAs.

NOT ALWAYS A PRETTY PICTURE

Camera systems have not been universally accepted, though. Earlier this year, the Cambridge, Mass., City Council ordered a halt to a camera surveillance project, citing privacy concerns and a need to reevaluate the project.

Privacy concerns also led San Francisco to decide to use a 71-camera surveillance system for retroactive retrieval of images rather than for active monitoring, but that system was later found to be mostly ineffective. According to a city report, the camera system failed in its primary goal of reducing homicide and other violent crime, but it succeeded in reducing offenses such as burglary, pick pocketing and purse snatching. The study also criticized the program for not having a dedicated manager, lack of training for officers and attorneys, and a lack of visual clarity. Because of the low frame rate of San Francisco’s cameras, the footage has been criticized as being disjointed, limiting the amount of evidence investigators can use. Plus, San Francisco Police Chief George Gascon told a local television station that the cameras must be monitored in real time to be an effective deterrent of crime.

Increasing the frame rate and retaining the images longer would cost an additional $3 million, city officials say. “We’ve been making improvements to our system,” says Neville Gittens, the San Francisco Police Lieutenant who became the designated coordinator of the system after the report was released. “We’re changing the location of some cameras. Since it’s not an active monitoring system, once you point a camera lens at a particular distance and angle, it stays. We looked at where the cameras are pointed based on feedback from officers. We’re also doing a lot of improvements to the hardware and software and download rates.”

When Denver hosted the Democratic National Convention last year, the city installed more than 60 cameras to help with security. After the delegates left, the cameras were incorporated into the Denver police’s High Activity Location Observation (HALO) system. The system includes 69 wireless mobile cameras and links about 190 stationary video feeds operated by the city’s traffic department and Denver Regional Transportation District (RTD). The cameras cost about $25,000 each, have a range of one city block and a manual zoom.

Denver police officials say the cameras help assist officers by gathering evidence and improving response times. And, in the high-crime areas where the cameras were placed, crime decreased by up to 45 percent.

The HALO cameras, including the traffic and RTD cameras, also are used by the Denver Office of Emergency Management and Homeland Security (OEMHS) to assist in emergency response. When blizzards and tornadoes strike Denver and surrounding areas, Denver OEMHS can identify the location and severity of hazards using the cameras. “Since we are in the basement of the city and county building, they give us an eye on what’s going on throughout the city,” says Scott Field, deputy director of OEMHS.

There are many precautions communities should take before surveillance cameras are installed, says Dilip Sarangan, industry analyst for Frost and Sullivan. For example, Sarangan warns against making the same mistake as San Francisco and not installing infrastructure to support the system. Sarangan also suggests that governments pick companies with a solid track record of installing camera surveillance systems. He recommends that cities apply for grants from homeland security programs, such as the Urban Areas Security Initiative, to help fund surveillance networks.

Sarangan says camera systems can help first responders prepare and, ultimately, save lives when good quality images are available. “The city council might put these systems together, but if it doesn’t capture those images and doesn’t give them what they want and doesn’t prevent crime, it can be wasteful,” he says.