My reasons for attending the National Institute of Governmental Purchasing (NIGP) convention were simple. In my nearly 20 years of experience working 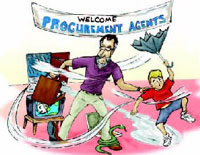 My reasons for attending the National Institute of Governmental Purchasing (NIGP) convention were simple. In my nearly 20 years of experience working with government officials and the vendor community, I regularly attend conventions geared to government buyers and sellers. Because NIGP’s annual Forum and Products Expo is the government market’s largest purchasing show, this convention is at the top of my list. I feel that the purchasing community itself forms the essence of the government marketplace.

Personality-wise, in my opinion, the procurement community is also one of the “breeziest” within government, composed of people who are friendly, engaging, good-hearted, and wholly dedicated to their professional mission of saving taxpayer dollars.

With these thoughts in mind, I packed my bags to attend this year’s NIGP show, slated for mid-August in Biloxi, MS. Little did I know that a memorable flurry of events, spearheaded by the onset of Hurricane Charley, would steer my course.

This particular week of August was easily one of the most diverse weeks of my life. I set out to attend the NIGP show, along with my youngest son, Eric, who is almost 14 years old. We planned to stay at the Beau Rivage Resort, site of the convention, for three nights.

Immediately after the show, I would meet with business clients, en route to my son’s pet peeve—the Florida Reptile Expo, in Daytona Beach.

In the past, Eric and his sister have accompanied me to many conventions. They especially welcome the chance to visit exhibit booths and collect promotional freebies distributed by company representatives, who are always very cordial.

We began the week with a mishap, as my temperamental car finally bit the dust. Luckily, I was able to rent a car, which I picked up soon before we were to leave.

The road trip to Biloxi was great. Once we arrived, Eric really enjoyed the hotel and various restaurants. Although his age prevented him from entering the casino, he took full advantage of the hotel pool and amusement arcade.

While at the show, attendance was strong. I was particularly impressed by the energy of attendees, who cultivated every moment of this event as if it were a precious commodity. Delegates diligently networked with colleagues, attended professional seminars, and visited the exhibit hall, embracing every facet of the show’s agenda with zeal.

At this year’s show, I was privileged to attend a private luncheon hosted by the Editor of Government Procurement, Kate Frisch. Members of the publication’s Editorial Advisory Board—Bill Irish, Yoli Jones, John Klopp, and Jay Mc-Cleary—attended the luncheon meeting to discuss procurement challenges, as well as practices that will best serve the profession.

Although there is occasional bad press about government miscues in spending, I believe that overspending is extremely minimal. The watchdogs of the procurement process are the same types of individuals I’ve met at NIGP conferences over the years. The purchasing community’s ongoing professionalism, honesty, and determination are backed by a commitment to continually improve the procurement process. In my opinion, these ideals will ensure that the efficient delivery of governmental goods and service will continue in the years ahead.

Preparing for the Worst
Upon leaving the NIGP show, my business appointments panned out nicely. Then, on Thursday, August 12, while stopping for gas in St. Petersburg, FL, we saw that all service stations were packed. The crowd of frenzied motorists turned out to be our first experience with Hurricane Charley, which was destined to come ashore in the next day.

We learned that an evacuation was ordered for Pinellas County, where we were located, and about 450,000 people were on the move across the bay to Tampa and other parts inland. I used my knowledge of the area to pick an alternate route, and we arrived at Daytona Beach with only minor delays. My bravado, however, disappeared on Friday afternoon, when we learned from the National Hurricane Center that Charley had veered to the right and was now heading straight for us.

I fretted for a few hours about what to do. Based on my years of government media experience, I knew two things. First of all, you cannot prevent a disaster, but you can limit its aftereffects. Secondly, when life hands you lemons, you make lemonade.

Therefore, Eric and I then went to the grocery store and bought our favorite snacks and beverages. Eric wanted me to buy Smirnoff coolers. Although the parent in me would not allow this, it was tempting.

Then, we topped off the gas tank, returned to our hotel, and turned on the television, only to view depressing and repetitive news reports. We soon scanned for movies, and enjoyed watching the classic disaster film, Earthquake. Hunger was then settling in. Amazingly, we found an open pizza place that delivered, so we ordered a Sicilian pizza. While enjoying our delicacy, we tuned into the FX channel, which showed endless re-runs of the show, Fear Factor.

Since we were hunkered down with many of our favorite creature comforts, in a hotel I thought was structurally sound, I felt we were safer than other possible options.

We were feeling pretty content, until about 11:30 p.m., when Charley arrived. The wind and rain began slowly and then attacked with fury.

Flirting With Disaster
Although I’ve experienced tornadoes before, Charley was like the Russian novel version of a Texas tornado. It was endless! We could hear objects striking our windows. During one glance out the window, I saw a young man from next-door pointing to my car’s back windshield and saying, “Look, it broke!”

I then went outside with a blanket to cover the windshield, but it blew away instantly. I also noticed that our room’s picture window had shattered. In turn, I saw Eric racing toward me. Due to the high wind, the door slammed shut behind him. I quickly asked him, “Did you bother to come out with your room key?” In typical 13-year-old fashion, he sheepishly replied, “Whoops!”

So here we were, locked out of our room, in pounding rain and wind gusts of up to 110 m.p.h.! I said in desperation, “Let’s make our way to the front office to get a key and find help to repair our window.”

Luckily, we obtained a key and met up with the hotel maintenance man, who located masking tape. As we ran with him back to our room, it became apparent that he was terribly drunk. Despite his teetering condition, he repaired the window marvelously. Given the doom and gloom of Charley’s rage, I almost couldn’t blame him for getting plastered.

Next, we turned on the radio, but each station recounted what to do in the aftermath of Orlando’s storm. The last thing on my mind was how to deal with the future, when I was perilously mired in the stormy present!

Thus, off went the radio, and we just talked. Eric would say, “Do you think it’s over?” every few minutes, and I would reply, “Not yet.” He’d then ask, “Do you think the Reptile Expo will open tomorrow?” I certainly hoped it would open, as I did not relish the idea of driving a disappointed teenager almost 1,200 miles back to North Texas. Then Eric asked the inevitable, “How are we going to get there (due to our broken windshield)?” I mused, “We’re walking,” which ushered a great sigh.

Thankfully, the show opened on schedule, and it was a great two days of snakes, other reptiles, and related equipment. Eric bought snake-handling tongs, a female Sumatran Red Blooded Python, an Amazon Tree Boa, and a corn snake for a friend.

After the show’s first day, we returned our car to the rental firm, complete with its broken windshield and flattened rear tire, caused by the storm’s flying debris. The rental firm promptly gave us a new car, which was identical in model and color, so it almost seemed as if our misadventures had never happened.

To my surprise, on the night following the Reptile Expo, Eric took the critters out of their pillow-cased enclosures and placed them on the bed next to mine. The Sumatran snake was particularly skittish and would “lightning-like” lunge several feet with the full force of its body at us, which shocked us both.

Unknowingly to yours truly, while I drove home that Monday, Eric opened this same snake’s pillowed home, and the reptile lunged out and nearly leaped into the front seat. This experience occurred while I was driving at 75 m.p.h. on I-10. I quickly reprimanded my son, telling him we would not risk a car wreck because of a loose snake in our second vehicle (actually third) of the trip. I also didn’t think the car rental firm would be very understanding.

Although my trip was a bit harried, it was certainly memorable. I have no hesitation about attending next year’s NIGP show in Anaheim, CA. Let’s hope typhoons aren’t in the forecast.

Editor’s Note: For the past 20 years, Steve Weintraub has worked as a government sales specialist for Penton’s GovPro Media, which includes Government Procurement magazine. He graduated with a degree in public relations from Kent State University in Ohio, after which he worked in the newspaper and magazine fields. Weintraub and his family currently reside in Richardson, TX, near Dallas. He is active in many community associations and school projects.