San Francisco-based Dedrone works with managers of arenas, stadiums and other public facilities to detect unauthorized drones and other unmanned aerial vehicles. 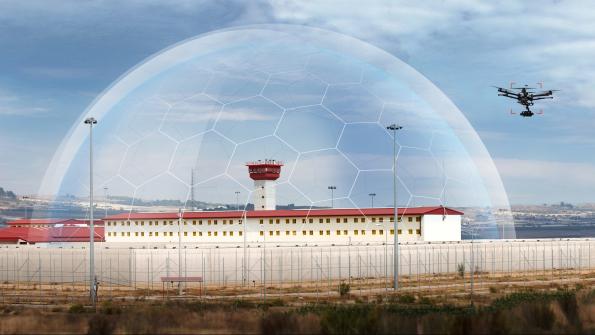 JL: Drone detection is far more important, because they can carry anything in their payload. A cell phone may be used to communicate with the outside, but a gun, grenade, drugs, or other weapons are deadly. Prison administrators are rapidly accepting the all-to-real security risk that drones pose to the airspace of a prison. Guns can easily carry a gun right up to an open window, drop explosives or tools to aid in an escape, or be another channel for drug delivery, eluding guards and causing even more violence in prisons among gang members. There are severe physical safety risks to not only guards and prison administrators, but also the public. This is no longer “news” or “notable” — it’s a reality.

We work with Suffolk County Prison on their security program, as contraband, including weapons, cell phones, and drugs are very easy for small drones to discretely carry. Security officers can detect the direction of the drone up to 1km with our software, and intercept the payload before they could reach an inmate. Like all prisons, there are elaborate security provisions on the ground – high walls with razor wire, security cameras, spots etc. – but above the fence the airspace is completely unprotected. Drones can carry payloads of just a few ounces, all the way up to hundreds of pounds (designed to carry a person), and are easily maneuverable.

GPN: For jails and prisons, is drone detection important and necessary from a security standpoint?

JL: Drone detection is critical in ensuring the safety of a prison, and the only measure available. For prison management, the risks are deadly. Prisons are accepting aerial threats as a rising security issue, especially as drones are becoming more accessible, less expensive to use, and easier to operate. The FAA estimates that small, hobbyist UAS purchases may grow from 1.9 million in 2016 to as many as 4.3 million by 2020.  Sales of UAS for commercial purposes are expected to grow from 600,000 in 2016 to 2.7 million by 2020. Combined total hobbyist and commercial UAS sales are expected to rise from 2.5 million in 2016 to 7 million in 2020.