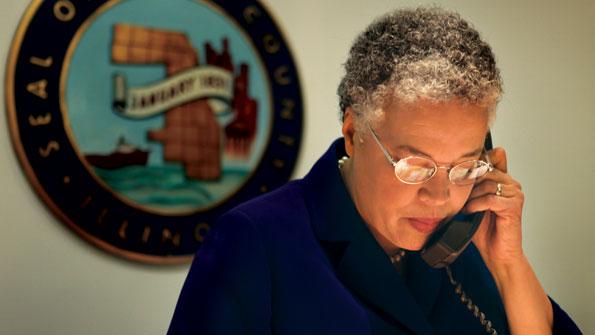 Toni Preckwinkle’s many admirers attribute her success as Cook County, Ill., President largely to her experience as a high school history teacher. Her straightforward style, her ability to translate the mysteries of budgetcraft in simple terms, her patience with questioners — all of those qualities are cited as keys to her outstanding performance.

But, Preckwinkle says that teaching is not her first love. “I was in politics before I was a history teacher,” says the Minnesota native. “In high school in St. Paul, I got involved in an alderman’s race, putting up yard signs, stuffing envelopes. We didn’t win, but I decided to continue to work in politics. I’ve always been involved in politics.”

Whether it is her teacher’s patience or her finely tuned political skills, Preckwinkle has needed them all to lead the nation’s second largest county through one of the toughest budgetary periods in its history. Faced with a previously undisclosed $487 million deficit just days after she assumed office, she quickly drew up a budget to fill that gap and immediately began work on another tough roadmap for the next fiscal year. In the process, she has won the respect of fellow county leaders as well as civic officials, who were more accustomed to battling against cronyism, patronage and worse.

“She exceeded all of our expectations because of her leadership on the fiscal issues,” says Laurence Msall, president of the Civic Federation, a Chicago-based group that focuses on financial management in the region and the state. “She has shown a willingness to take on entrenched financial issues in the county and maintain the public’s confidence.”

For her commitment to fiscal responsibility, her high standards for performance and accountability, and her efforts to reach out to the diverse constituencies within Cook County, American City & County has chosen Toni Preckwinkle as its 2012 County Leader of the Year.

Among her achievements since taking office on Dec. 6, 2010, Preckwinkle has:

While the cost reductions have been a major theme of her administration, Preckwinkle also has emphasized the need to change the culture of how the county conducts business, adopting practices designed to root out decades of corruption. According to a 2010 report from the University of Illinois at Chicago and the Better Government Association, nearly 150 Cook County politicians and government officials were convicted since 1969. The report characterized the convictions as just the “tip of the iceberg” in the amount of county corruption.

In response, Preckwinkle issued an executive order mandating that all staff reporting to her participate in ethics training and, despite an austerity budget, increased funding to the Office of the Inspector General (IG) by 31 percent and increased the IG’s authority and powers of investigation. She also has begun working with outside groups to revamp the county’s purchasing processes.

“She’s not a traditional public official,” Msall says. “She not only understands but anticipates the challenges facing the public and explains why reforms require sacrifice, why reforms are needed to make a change in county government.”

Kurt Summers, Preckwinkle’s chief of staff, says that the president’s clear direction has helped to establish a new atmosphere in county government. “There is energy around change in Cook County,” he says. “It’s long overdue.”

Preckwinkle, 65, came to her Cook County post after serving for 20 years on the Chicago City Council, as the alderman in the 4th Ward, the area around Hyde Park, also known as the home of President Barack Obama. As an alderman, she was an occasional critic of City Hall and was considered a member of the reform bloc. Born and raised in the St. Paul, Minn., area, she moved to Chicago to attend the University of Chicago and, after receiving her degree, taught history in area high schools for 10 years. While a teacher, she ran for alderman and lost twice before defeating the 17-year incumbent by a 109-vote margin in 1991.

Deciding that the county government needed reform and seeing no other candidates emerging, Preckwinkle decided to take on the incumbent Cook County president, Todd Stroger, who is the son of the late, long-time incumbent John Stroger. She was not well-known outside of her own ward, so her campaign began slowly. But, she says money poured into her campaign after both newspapers endorsed her, and she ultimately defeated Stroger with more than two-thirds of the vote. “It was a combination of hard work and luck, like everything else,” she says.