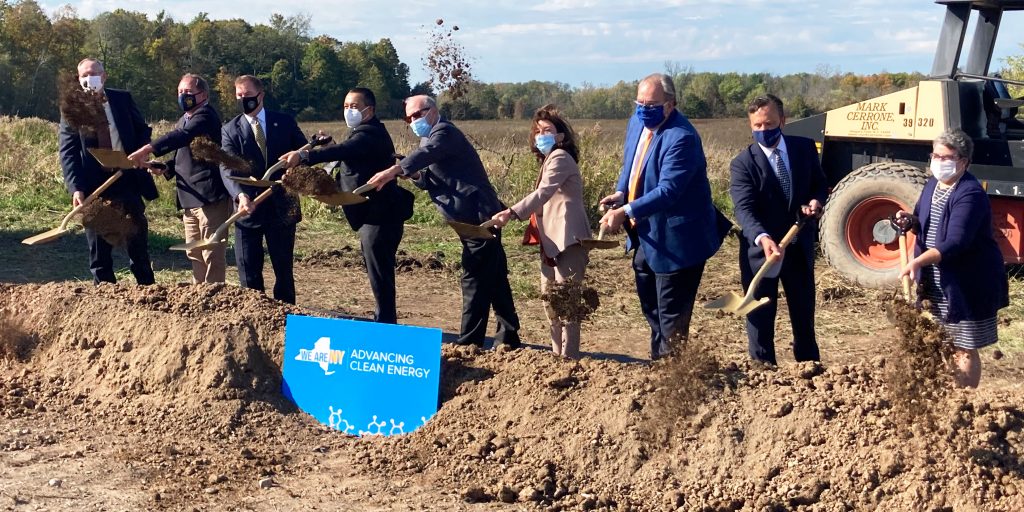 Latham, N.Y.-based Plug Power is the first tenant for STAMP, a 1,250-acre manufacturing site, located within a 50-mile talent base in the Buffalo-Rochester Tech Corridor. Developed by the Genesee County Economic Development Center (GCEDC) with the support of New York State, Genesee County, the Town of Alabama and utility partners, STAMP is the largest greenfield in western New York, with access to large-scale and low-cost utilities and strong transportation access. Empire State Development is also supporting the project with up to $2 million in Excelsior Tax Credits in exchange for job creation commitments.

“This groundbreaking is incredibly significant for the economies of the Finger Lakes and Western New York, providing new jobs and establishing the region as a prime destination for large manufacturers moving forward,” Gov. Hochul said. “Plug Power’s new facility will be the largest plant in North America producing green hydrogen, advancing our ambitious green energy goals as we work toward a cleaner future.”

Plug Power’s $232 million project is the largest ever capital investment by a project at a Genesee County business park, and from the first year of operation, the project will be the county’s largest non-utility contributor to local school, county and town taxes with a combined investment of $2.3 million annually in PILOT and host payments.

STAMP is located less than 30 miles from the New York Power Authority’s (NYPA) Niagara Power Project. The NYPA is the largest state public power organization in the nation, operating 16 generating facilities and more than 1,400 circuit-miles of transmission lines. More than 80 percent of the electricity NYPA produces is clean renewable hydropower generated from Niagara Falls. The NYPA is offering the Plug Power project incentives that include a 10-megawatt allocation of low-cost hydropower from the Niagara Power Project, $1.5 million from the Western New York Power Proceeds program, and 143 MW of High-Load Factor power that NYPA will procure for Plug Power on the energy market, drastically lowering electric bills through a reduction in electricity delivery chargers.

What is green hydrogen

Hydrogen produced using energy from renewable sources such as hydropower is classified as “green hydrogen,” and is cleaner in source and more desirable in the market than hydrogen produced using fossil fuels. At the STAMP facility 100-percent renewable power will be used to split water into hydrogen and oxygen using an electrolyzer. No chemicals or fossil fuels are inputted or outputted by this process, which results in hydrogen gas and oxygen gas. The hydrogen is cooled to a liquid before being transported, and the oxygen is released to the atmosphere. According to GCEDC, in each year of operation that release is equal to the oxygen produced by 18,500 acres of forest.

Because they produce no harmful emissions, hydrogen fuel cell (HFC) technology offers the advantages of a clean and reliable alternative energy source to customers in a growing number of applications—electric vehicles (commercial fleets and cars); primary and backup power for commercial, industrial and residential buildings; and even more futuristic-sounding applications like drones and air taxis.

As cities, counties and municipalities more toward more sustainable energy sources, hydrogen HFC could be an option as they are energy efficient and can be engineered precisely to fit a company’s power needs. HFC also are reliable in dangerous weather conditions like hurricanes, deserts and winter storms.