Faye Outlaw, American City & County's 2011 County Leader of the Year, has helped her community withstand the strong winds of financial challenges by creating a sustainable future. 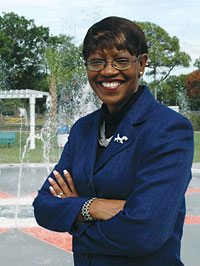 Just a few days after Faye Outlaw began working as assistant county administrator for Florida’s St. Lucie County in 2004, she was thrown into disaster-recovery mode after Hurricane Frances ripped through the area. Then, just three weeks later, Hurricane Jeanne hit the county. That baptism by fire was a harbinger of things to come.

Five years later, when Outlaw became the county administrator, she faced a $57 million operating deficit, double-digit unemployment, and one of the highest foreclosure rates in the country. But, after just two years in the top position, Outlaw has made huge strides in solving the county’s economic challenges, cutting the deficit by $23 million in her first budget and bringing unemployment down to 12.5 percent in March 2011, from a high of more than 15 percent in 2010. For her determination to serve her constituents during tough economic times, and her willingness to make tough decisions to solve problems, Outlaw has been selected American City & County’s County Leader of the Year for 2011.

Outlaw’s leadership-savvy and budget-balancing skills have made an impression not only in St. Lucie County but also across the state. She recently received the 2011 Career Excellence Award from the Florida City and County Management Council, and her efforts have attracted kudos from state legislators. “Faye Outlaw epitomizes the greatness of a public servant,” says Ken Pruitt, a former Florida state senator who recently became St. Lucie County’s property appraiser. “She lives, breathes and bleeds public service. Watching her deal with this budget in these very challenging times has inspired me. She has been able to navigate her way through some very tough waters.”

With the nationwide recession gathering steam in 2009, then-Assistant County Administrator Outlaw was tapped to fill the vacated county administrator position and address major problems in the county’s budget. “We had a $57 million gap in our operating budget. Two major enterprise funds had big gaps, and so did five major special funds,” she says. “There’s certainly not a quick fix to solve budget problems like that.”

Outlaw took a methodical, strategic approach to begin chipping away at the deficit. She started by streamlining the county’s overall operations while still providing most services. She consolidated operations, decreasing the number of departments from 18 to nine. “From an organizational standpoint, it was imperative to restructure,” Outlaw says. “The budget could not sustain the type of structure we had in place.”

Unfortunately, cutting departments meant laying off staff. In her first year as administrator, Outlaw fired 45 employees and downgraded another 43. “My overriding goal was to create a sustainable operation for the county on a number of levels,” she says.

Outlaw had to reposition how the county budgets and plans for expenses, she says. Her first step was to create a sustainable budget, which meant that recurring expenses had to be supported by recurring revenue rather than the county’s previous model of relying heavily on one-time funds. For the past several years, for example, the previous administration used unspent money from previous budget years to balance the current budget. That unspent money came from budget items such as early retirements, voluntary layoffs, frozen positions and the reorganization of county operations.

Finding new ways to do more with less was the second part of creating a sustainable operation. “Given a 35 percent reduction in my workforce and the demand for services the community has come to desire and expect, we had to increase our services and standard of excellence with fewer resources,” Outlaw says.

Through her leadership and some creative thinking, the county has increased some service levels by creating partnerships with local nonprofit groups. Rather than close down the St. Lucie County Regional History Center because of a lack of funding, the county worked with a local historical society to provide volunteers to staff the museum. The county no longer pays salaries for three full-time employees, and instead just pays for maintenance, utilities and other non-operating expenses. The partnership has saved $230,000 annually and allowed the museum to remain open.

In another successful partnership, the county’s Environmental Resources Department joined with Indian River State College’s Public Safety Training Complex and the Florida Division of Forestry to use students enrolled in the college’s fire academy to conduct controlled burns on some of the county’s 7,700 acres of environmental preserves. The program gives students real-world fire training experience and helps the county manage its preserves to prevent wildfires from occurring, which has been critical lately. With extreme drought conditions, many surrounding counties have experienced wildfires, while St. Lucie County has had very minimal fires, Outlaw says. The program saved more than $53,000 in operating expenses for the county and burned more than 540 acres.

While most services have been maintained, some have been reduced to work toward a balanced budget. In those cases, Outlaw has clearly communicated with residents about what changes will be made and why. “[Outlaw’s] goal of fiscal sustainability has been clear from her first day on the job, and she has kept that goal at the forefront of every budget decision, meeting and hearing,” says Assistant County Administrator Lee Ann Lowery, who worked closely with Outlaw to reorganize the county departments. “She has done this so effectively that the citizens understand why their programs and services have been cut and, for the most part, have accepted it.”

Fort Pierce City Commissioner Eddie Becht is most impressed by Outlaw’s “tireless work ethic,” he says. “Knowing the hours she works, and her intellect, it is not hard to understand why the county has survived these hard economic times with a minimum of disruption in the delivery of public services.”

Planning for a new normal 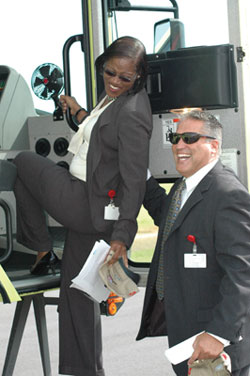 In addition to reorganizing county operations to meet budget constraints, Outlaw also has worked to prepare the county for a new day. Before the recent real estate crash, St. Lucie County’s economy largely depended on the construction industry. “So when the housing market fell, it hit us very hard,” Outlaw says. “We were determined to keep our local economy going.”

Some construction trades had 40 percent unemployment. To put laid-off people back to work, Outlaw joined with other local leaders to establish a Green Collar Task Force, a collaboration of representatives from St. Lucie County, a nonprofit workforce group, and a consortium of eight trade unions. The group trains new and employed workers in green-collar building/construction jobs to meet the growing labor needs of green technology businesses in the area.

In addition, Outlaw helped institute the Solar & Energy Loan Fund, a conservation initiative that has drawn national and international attention for its innovative approach to fostering a green economy. The county joined with local financial institutions and community leaders to establish the non-profit fund, which provides low-interest loans to residents and small businesses that invest in energy-efficiency enhancements and renewable energy. So far, the Solar and Energy Loan Fund has issued six grants and has letters of commitment for 10 more, for a total of $145,000 in energy improvements.

Not only does the fund stimulate the creation and retention of clean jobs and contribute to the reduction of greenhouse gas production, it also provides a long-term strategy for building the local economy. “It’s designed for us to create a sustainable district,” Outlaw says. “We put together a strategy to deal with energy use within the district and retrofit buildings to make them more energy efficient. Our intention is to take a very holistic approach.”

St. Lucie County is “not out of the woods yet,” Outlaw says. But every day, she is working on getting there. Outlaw does not expect others to do all the heavy lifting. She makes a point to approach issues as part of a team.

City Commissioner Becht says Outlaw’s management style is “old school” because she leads by example. “She does not expect her employees to do anything she would not be willing to do herself,” Becht says. “Unfortunately for the employees, she works a 60-hour week, and that is rare these days in the public sector.”

Although their hours may be longer, Outlaw’s staffers respect and appreciate her dedication. “[Outlaw] is a courageous leader,” Lowery says. “She is not afraid of any challenge and does not choose the easy, expeditious answer if it is not the right answer.”

Thanks to Outlaw’s hard work and dedication, a county that could have been in ruins is now thriving. “She was handed a pile of junk, and she’s been able to make soufflé out of mashed peas,” Pruitt says.

“Even during this economic tsunami, [Outlaw] has led the county forward,” Lowery adds. “While some leaders would have been content with keeping the ship afloat, she has steered St. Lucie County into a new, innovative era that will benefit us for years to come.”