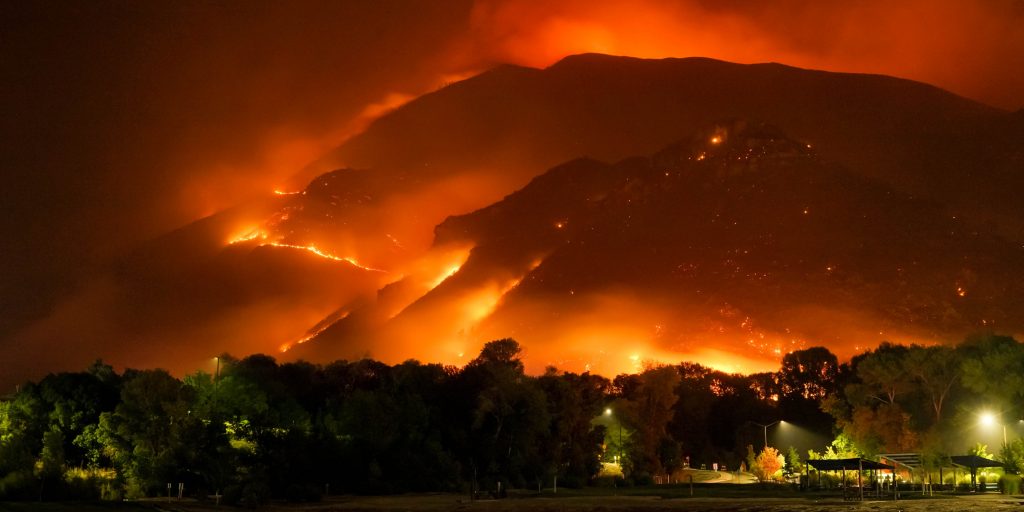 For public agencies, proposed ‘metaverse’ has implications beyond social media—like predicting the spread of wildfire

For the past few weeks, talk of Mark Zuckerberg’s vision of the ‘metaverse’ has dominated the internet. The metaverse—a hypothesized evolution of the internet—would take websites and social media platforms one step further into virtual reality.

Other global tech companies including Microsoft and Nvidia are also on board, announcing their own iterations of the same concept. The term metaverse was coined by Neal Stephensen in his 1992 novel “Snow Crash.” Proponents have pitched it as an open-source platform like the world wide web—connecting unlimited virtual worlds built with the same infrastructure.

Users could seamlessly travel between these spaces.

From virtual entertainment events to social apps that could bring people together into the same digital space, to remote workplaces, the implications of such a technological evolution—both positive and negative are sweeping. Local government and public agencies are among those that could be affected.

The technology behind the concept is powerful, and with the right application, it could prove beneficial in helping city planners address challenges like traffic congestion, scientists better understand how to mitigate climate change and first responders contain wildfire. This is made possible through “digital twins”—or virtual replicas of things that exist in the physical world.

At a press briefing last week ahead of Nvidia’s annual GPU Technology Conference Tuesday, Rev Lebaredian, vice president of simulation technology and Omniverse engineering at Nvidia, highlighted the launch of an artificial intelligence (AI) simulation lab in Silicon Valley that will be dedicated to predicting and responding to wildfires. The lab will be built with Nvidia’s digital-twin technology through a collaboration between the tech brand, Lockheed Martin with it’s Cognitive Mission Manager system, the U.S. Department of Agriculture Forest Service and the Colorado Division of Fire Prevention & Control.

When it’s fully up and running, fire officials will be able to study a real-world wildfire’s behavior in the virtual space, in real time, and run simulations projecting what could happen in the future.

“In Omniverse (Nvidia’s branded digital world), you’ve got a virtual world that represents a photorealistic digital environment. In it, we can visualize the fires and aspects that affect them, like the terrain, slope, wind and more,” said Shashi Bhushan, principal AI architect at Lockheed Martin in a statement. “In the near future, we could generate synthetic data by flying virtual assets through the Omniverse scene. Additionally, the Omniverse simulation becomes the foundation to create additional AI based models to explore response behaviors.”

Well outside the danger zone, emergency responders, operators and engineers will be able to test and evaluate the impact of their suppression activities before opening a nozzle in the real world. The virtual technology will also allow historic fires to be replayed for training purposes—viewing the fire spread from many different angles.

“We can give ourselves superpowers,” said Rev Lebaredian, vice president of simulation technology and omniverse engineering at Nvidia, speaking at the press briefing. “Once you have an accurate representation of something in the real world, in the virtual world you can do some pretty amazing things—like teleport.”

By replicating real-world physics into the virtual space, “you can see it and feel it as if it’s actually there,” Lebaredian continued. “With simulation, we also have the potential of time travel in these worlds—we can record what has happened in the real world and rewind to play back what happened in your factory, or on the roads.”

The lab is being created with data contributed by the USDA Forest Service Missoula Fire Sciences Laboratory in Montana, “which conducts cutting-edge work in wildland fire rescue,” including the development of a fire behavior and prediction tool. The Montana lab “has been providing applications, data, software and products to aid in fire analysis and simulation,” a brief from Nvidia notes.

The Colorado Division of Fire Prevention and Control is an early adopter of Lockheed Martin’s technology, and is providing expertise, user feedback and experience to the project.

“Colorado Fire is also providing historical fire data for modeling visualizations in NVIDIA Omniverse. Through this continued partnership, Lockheed Martin engineers will be able to process data and make predictions through the (lab’s technology) from an active wildfire observed by the aircraft in real time to assist onboard fire responders,” the brief says.