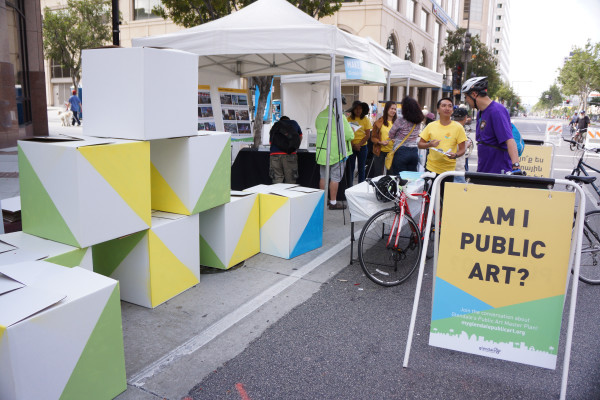 The art of the public art installation: Building a vision with communities

Some of us view public art installations simply as points of interest when we tour unfamiliar neighborhoods. But there’s nothing simple about these installations. For municipalities, they can foster a sense of community and belonging, or they can backfire and become a source of controversy. It’s critical, therefore, that municipalities choose public art with care and solicit input from local communities in the selection process.

The benefits of community engagement are significant. Public art enables community members to honor local stories, heroes and history, all of which instill pride in residents and strengthen the sense of belonging. Art also can activate underutilized spaces, both increasing the appeal of neighborhoods and revitalizing public areas. It’s even possible for art to mitigate extreme heat in urban environments through shade and cooling.

But without community buy-in, public art can foment conflict rather than promote unity. It’s not hard to find examples of these scenarios. “Museum’s role in police mural outside Detroit draws criticism,” reads the headline of a recent article in The New York Times. Tristin Hopper of the National Post enumerates several Canadian examples in an article entitled “Why public art is so consistently awful”. He writes: “It’s almost a cliché by this point: A city unveils a six-figure public art installation, and a horrified public is left to gape at a pile of twisted, rusty postmodern shapes.”

In contrast, when communities have a say in the medium, artist, subject matter and location, the outcomes are far more positive. The approaches of several projects serve as cases in point:

In Santa Clara, Calif., county supervisors recently launched a public art project called Womanhood that uses an interactive mapping program to gather ideas and recommendations from community members in honoring women’s contributions through temporary and online public artworks, naming/renaming of public buildings and spaces, and permanent commemorative artwork and public places. Many residents have expressed appreciation for the opportunity to contribute suggestions and have shown enthusiasm for the project’s future.

The city of Glendale, Calif., solicited feedback from residents in its Urban Art Program Plan through community outreach instead of costly community meetings that attract few residents. Nearly 2,600 people across Glendale’s diverse communities weighed in on the plan online and by text message in multiple languages, and their comments were relayed to stakeholders. The end-result was unanimous approval from the Glendale City Council.

Community engagement in public art selection is not only a West Coast phenomenon: Check out Lynnstallation, a project pioneered by the city of Lynn, Mass., in which community members were active decision-makers in the procurement and selection process (still underway).

Each of these examples offers useful models for municipalities to emulate in energizing and revitalizing communities through public art projects. We recommend that municipalities wishing to pursue similar approaches start by asking the following questions of their communities:

To ensure high response rates, municipalities should enable community members to share their ideas through a variety of methods: text messages, digital and physical comment boxes, QR codes. Provide a map so that residents can visualize where the proposed projects will be located. And be sure to provide translations to increase accessibility for residents. If you neglect this, you will not achieve a full picture of community sentiment.

Whatever vision you have for your public art project, remember that art is a powerful medium that galvanizes emotions and celebrates community … when the vision is shared by all stakeholders.

Karin Brandt is the founder and CEO of coUrbanize, a technology company that powers community engagement in development and planning. Brandt earned a master’s degree in city planning from MIT. She began her urban development career at the Lincoln Institute of Land Policy in Cambridge, Mass. Contact her at [email protected]or (888) 562-9952.