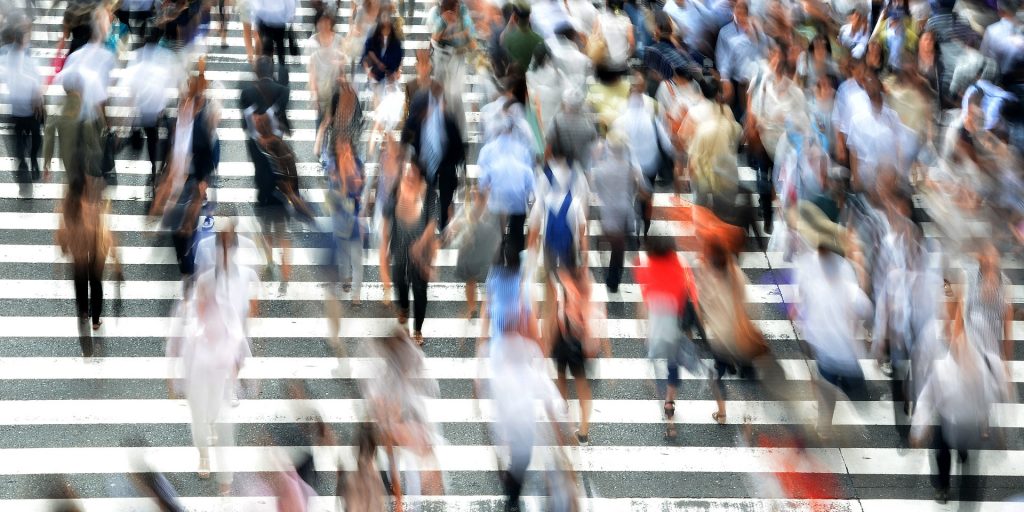 By 2050, more than 70 percent of the global population is projected to be living in cities, continuing a trend of urbanization that’s been ongoing since the industrial revolution. In that time, depression rates have increased exponentially across the board. Given the common perception of cities as cold, stress-laden environments, researchers have historically correlated a perceived link between urban-living and mental health disorders—particularly depression.

But a report issued this month by the Proceedings of the National Academy of Sciences (PNAS), “Evidence and Theory for Lower Rates of Depression in Large U.S. Urban Areas,” pushes back against that notion, highlighting that more research needs to be done on the subject.

Surprisingly, the study found that “per capita prevalence of depression decreases systematically with city size.”

The study was led by University of Chicago researcher Andrew Stier, a doctoral student in integrative neuroscience; Marc Berman, an associate professor of psychology; and Luís Bettencourt, a professor of ecology and evolution and associate faculty in sociology.

Starting with data derived from predictive modeling, the researchers confirmed their thesis by “using four independent datasets” from large metropolitan centers, the study’s abstract reads. According to an explaination of the findings published by the University of Chicago’s Division of Social Sciences, the research was built on prior work done by Bettencourt on the ways that a city’s infrastructure networks can expand social interaction, leading to increases in innovation and wealth.

“We wondered if those same principles and mathematical models could be applied to psychological phenomena, such as depression, to see if the actual social and infrastructure networks of cities—and how they change as cities get larger—could affect people’s psychology in a consistent way,” Stier said in the statement.

At a fundamental level, living in cities changes the way people think and interact with each other. For example, a city-dweller might walk faster and be more open to diversity and diverse ways of thinking than their rural counterparts. These adaptions can also have a detrimental impact on mental health, particularly through isolation.

In areas with high population densities, people tend to develop “strategies to curb unwanted social interactions—such that people in larger cities act in colder and more callous ways,” the study reads. And because cities tend to be more “mentally taxing” than rural areas, some studies have concluded in the past that that must mean cities “induce ‘stimulus overload,’ including stress, mental fatigue and low levels of subjective well-being.”

But while each city is unique, population density works both ways.

On the one hand, commuting daily on packed subways and navigating bustling sidewalks might encourage people to retreat inward for privacy. At the same time, a denser population affords the potential for more likeminded friendships—and a good social support network is a protective factor against depression.

In this, high population density can “provide a buffer against depression,” the study says. “This effect is understood theoretically by the statistical likelihood to interact with more people over space per unit time, leading to potential mental ‘overload’ but also, to greater stimulation and choice along more dimensions of life.”

Notably, too much density can have the opposite effect: Housing units packed one-on-top-of-the-other can promote “negative connections with neighbors, which can instill feelings of isolation, fear and despair. In addition, individual factors of gender, age, socioeconomic status and race, which vary at neighborhood levels within cities, have been found to be statistically associated with depression.”

People who are cut off from other people for any reason or stagnant within a city because of transportation challenges also might become isolated.

So, in considering ways to combat depression from a planning perspective, leaders of municipalities of all sizes might think about increasing transportation access and getting people to interact with each other in more positive ways. For small cities and counties that don’t have a high population density, Steir suggested in the statement that mental health resources should be “disproportionately allocated” there over large city centers. Leaders could also try to proactively set up social interactions that might happen organically in large city centers.

“The problem is that because there is less population density over a smaller city’s infrastructure networks, people will have to travel more or coordinate their behavior more, to get an atypical increase in more diverse social interactions,” Berman said in the statement.