A street in Seattle. Image via Unsplash 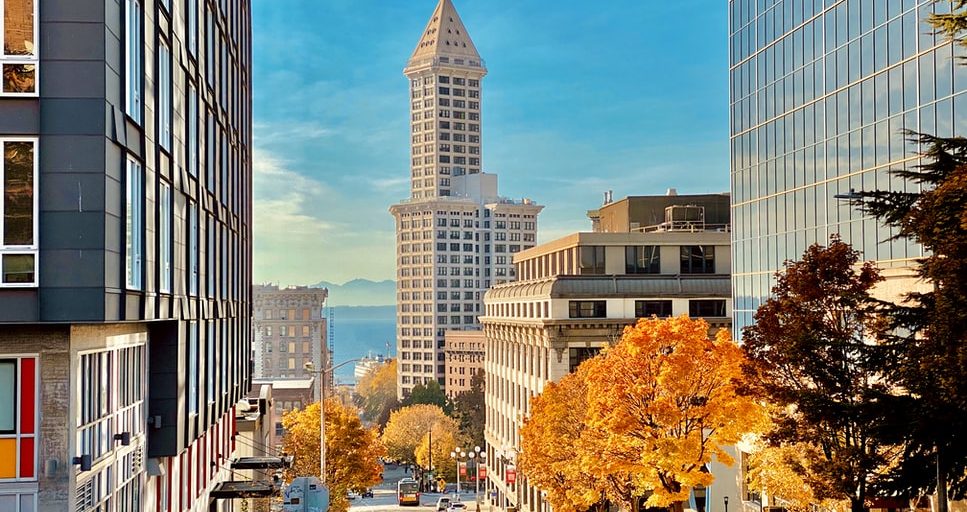 Although autonomous vehicles (AVs) are not fully ready for deployment, history provides strong incentive to begin planning for its implementation now.

In the early 20th century, the growth of the automobile erupted faster than regulators could have imagined with far-reaching consequences. Although cars eventually helped fulfill promises of economic growth, middle-class jobs, and on-demand mobility, without the requisite planning, they also contributed to mass economic, social, and environmental inequalities as cities became car-oriented instead of people-oriented.

Widespread car use outpaced the commonplace concepts we rely on today such as lanes, crosswalks, traffic signals, and parking regulations, which arose only as post-facto “solutions” to life-altering traffic, congestion, injuries, and fatalities. As AVs continue to become more advanced and street-ready, although mass adoption may not occur until the end of this decade, some cities are wisely preparing for the potentially profound shifts on their infrastructures and bottom lines.

In 2017, the Seattle Department of Transportation published their “New Mobility Playbook.” The city acknowledged that “misguided decisions and plans in the last century, particularly in transportation policy and infrastructure, often made life harder for citizens who were already at a disadvantage,” As such, the New Mobility Playbook exists as a set of policies and strategies to grow new mobility options while prioritizing safety, equity, affordability, and sustainability.

City planners in Seattle recognize that fostering AVs will have important implications on the ways they fund and manage the overall transportation system. Cities can collect hundreds of millions or even billions of dollars in annual income from public transportation (e.g., subway and bus fares), parking meters and traffic tickets (New Yorkers sadly learned this in the form of $545,000,000 in parking tickets in 2019), and gas taxes. Given that they will be mostly electric, more obliging of speed limits, and much less reliant on parking, AVs may severely disrupt city budgets. Without means of replacing lost revenue, it will be difficult to develop these transportation systems at all. As such, Seattle has set forth policy ideas and tools aiming to raise additional funds while also furthering broader goals of ensuring AVs are primarily used for shared, efficient trips (i.e., fewer PAVs, particularly zombie cars roaming without passengers) and supporting rather than replacing public transportation.

One example policy in Seattle would utilize the sensors in AVs to charge vehicles on a per-mile, per-passenger basis in certain highly-trafficked areas and corridors of the city:

Seattle proposes additional means of making money or otherwise using economics to shape desirable AV-related outcomes by, for example, (i) using the AV sensors to charge by the minute for waiting curb-side to pick up or drop off passengers, (ii) adding additional per-mile road use charges for longer commutes to mitigate suburban sprawl, (iii) offering incentives such as fee discounts for AVs that combine passengers and last-mile goods or food delivery on behalf of companies, and (iv) providing incentives for SAVs that provide access to subway stations and other shared mobility hubs.

AVs will not be introduced and become prevalent overnight. The transitional period when cities will be shared by AVs and human-operated vehicles will be messy and complex. Urban planners will need to change the way they approach design and development. Cities will eventually transition away from soon-to-be-outdated ordinances with respect to (i) parking minimums (e.g., there are 1.6 million parking spaces in Seattle – more than five for every household), (ii) street and curb widths (e.g., sensors will allow AVs to travel closer together, reducing the necessary pavement width and freeing up space for larger sidewalks), and (iii) building designs (e.g., how will passengers be picked up and dropped off, how will packages delivered by driverless AV trucks integrate with future mail rooms, and how can obsolete parking garages and lots be retrofitted for new types of cars or entirely different uses?).

One of Seattle’s policy blueprints contemplates and lays the foundation for making gradual changes to the zoning code to address these kinds of issues:

Seattle anticipates benefitting from writing and discussing these kinds of new form zoning codes today so that the debate is settled early, and their focus can shift to when these new codes should be enacted instead of playing catch-up.

To be sure, Seattle’s and similar leading AV-focused cities’ published plans are hundreds of pages long, ripe with policy ideas, visions of the future, and regulatory frameworks that tackle many issues. They are being updated to incorporate COVID-19 considerations and the public’s shifting opinions on ridesharing and mass public transportation. The above are merely small snippets of their thinking, aiming to demonstrate the breadth of considerations for urban planners and regulators, attorneys, and developers to bear in mind.