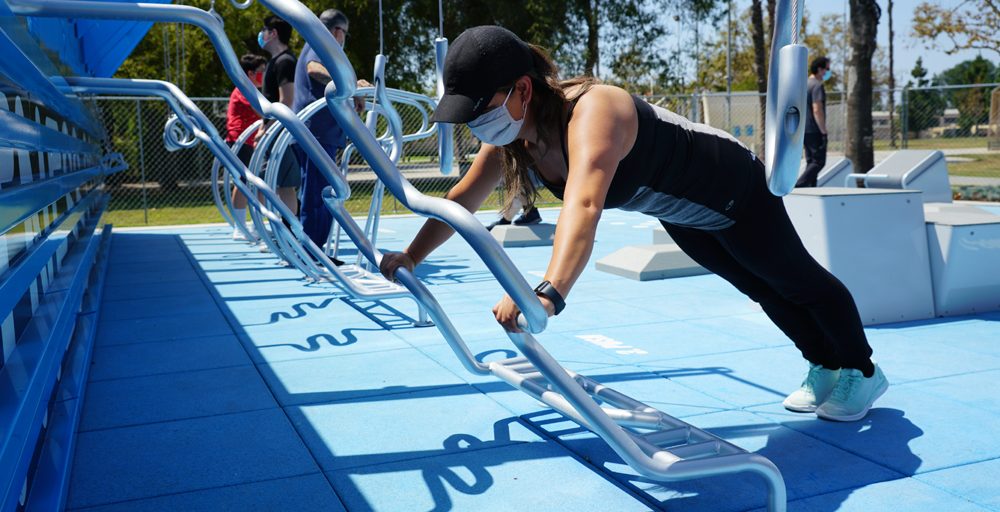 Lisa Rudloff is a community builder at heart. She has been in the municipal parks and recreation services for 30 years and held leadership roles in the California Park and Recreation Society, including serving as president in 2010-2011.

“Community enrichment through parks and recreation services is what I love to do,” says Rudloff, who is the executive director of parks, recreation and community services for the City of Santa Ana, Calif. “Working in Santa Ana is extremely satisfying. Everything we do can have a tremendous impact on the community, and small changes make a big difference in everyday lives.”

Santa Ana is one of America’s most densely populated cities, ranking fourth nationally in density for cities with more than 300,000 people. Like many congested inner-urban communities, Santa Ana faces an amalgamation of opportunities and challenges, prosperity and poverty, greenspace and wrongful use, positives and negatives that intertwine to represent an all-American tapestry of circumstance and change.

“The people here are very family-oriented, passionate about their point of view, and parks and outdoor recreation are very important to them,” Rudloff says. “Unfortunately, we also have issues with gangs, homelessness, graffiti and other circumstantial matters. My challenge is to make our parks safer, cleaner and activated.”

Joanna Axelrod is also a community builder, coming to her role as deputy city manager and director of communications and community services for the City of Escondido, Calif., organically. She started her career with the City of Escondido in 2007 as a youth services librarian, gradually progressing her way through the library and into broader city administration, where she now oversees the library, recreation centers, parks, adult services, and communications. Like Rudloff, Axelrod takes pride in helping her community thrive.

“I love helping to bring so much fun and joy to people’s lives,”Axelrod says. “My work is on the softer side of city services. As a full-service city, providing police, fire and water/waste water utilities to our residents is our core mission but when I see people participating in public recreation, it makes me realize why I got into public service.”

Within the realm of improving the quality of life in their communities, both Rudloff and Axelrod were keen to know more when they first heard of an innovative, free, public fitness and community infrastructure enhancement program led by National Fitness Campaign (NFC).

“When we made the connection with National Fitness Campaign, I was blown away by the concept,” Axelrod says. “We were so impressed with their product, the presentation, the process, and most importantly, their people.”

NFC’s fitness courts offer a functional fitness circuit training system built around body-weight exercises. Fifty different components on a 38-foot x 38-foot court combine to facilitate an estimated 500 different exercises. Ideally situated in public green spaces, along a walking/biking trail near densely populated areas, NFC’s fitness court is an exceptionally effective instigator of public awareness of the importance of physical activity in everyday life. Because body-weight exercises leverage only the strength, agility and individual confidence of the user, there is a limited possibility for injury despite the virtually unlimited potential of workout intensity achievable.

As municipal administrators, both Axelrod and Rudloff have an appreciation for the need to demonstrate ROI on any municipal investment.

Both Escondido and Santa Ana have signed on to National Fitness Campaign’s model cities program, whereby each city has committed to building not just one fitness court, but a network of fitness courts across the city.

“Our goal is to promote healthy living and happy lives,” says NFC Founder and Director Mitch Menaged, who has made building community his life’s work. “We see this program as an opportunity to impact the way cities are planned and built; a way to understand and improve healthy infrastructure in support of healthy communities.”

Beyond functionality, over four decades of experience getting NFC fitness courts installed and activated, Menaged’s understanding of the big picture in community building has been pragmatic by necessity.

“Our objective isn’t to simply to promote public fitness,” shares Managed, of NFC’s commitment to helping cities ensure communities embrace the new fitness courts. “We are fully staffed to help communities select the very best sites, secure funding partnerships, and promote community awareness and activation of these fitness courts well beyond the purpose of profitability.”

As participants in NFC’s model cities program, both Escondido and Santa Ana received seed funding for a network of five fitness courts, with each city being obligated to cover the balance of installation costs.

“In Escondido, the Utilities department needed to install a water pump station in one of our parks and had to reimburse the general fund; so, we were able to use that money to fund the first fitness court right away,” says Axelrod. “We’re leveraging incoming revenue from capital improvement fees already designated for improving public parks to cover the cost of the others.”

In Santa Ana, community enrichment funding for youth services had been set aside from local tax revenue on cannabis. While supplemental partnerships were not necessary for either Santa Ana or Escondido, NFC has helped other municipalities across the country foster key sponsorships with the likes of Wells Fargo, Kaiser Permanente, the Carolina Panthers and the Ironman Foundation, among many others.

“National Fitness Campaign helped us use urban movement data to spread the five fitness courts out in areas where population densities are highest and where CDBG funding can be activated,” says Axelrod. “These fitness courts can positively impact the quality of life. There is already a great energy and excitement building around them.”

In California and around the country, NFC is working with state organizations like the California Park and Recreation Society to promote and achieve a baseline impact density through a network of fitness courts across the state. The intent is to bring together both public and private partnerships to support the development of many more fitness courts in California in the next 10 years.

“There wasn’t any motive at National Fitness Campaign other than helping us build a healthier community,” says Rudloff of her experience in Santa Ana.

“Beyond site selection, National Fitness Campaign supported us with installation, marketing and public activation. They were very easy to work with, real problem solvers, who were willing to do whatever we needed to help get these courts built and activated quickly. Local obesity rates are sky-high, so increasing interest in physical fitness and outdoor recreation is essential to any effective solution,” finishes Rudloff. “Through our partnership with National Fitness Campaign, we are building a healthier community. We are reenergizing public parks as safe, accessible and active spaces. These courts make it easy for people to feel better about themselves through exercise, which is helping us build a better, stronger community.”

Sean O’Keefe is an architecture and construction writer who crafts stories and content based on 20 years of experience and a keen interest in the people who make projects happen. He can be reached at [email protected].