Dignity Village before its phased closure. Image courtesy of City of Gainesville. 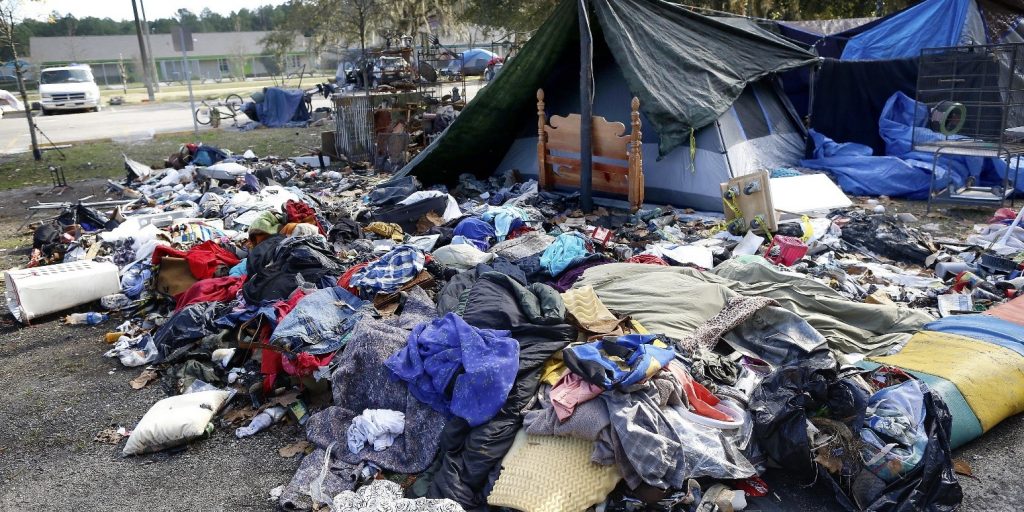 Gainesville, Fla., won its 2020 Crown Communities Award for leveraging local partnerships to thoroughly address a major homelessness issue, all while under the pressure of the COVID-19 pandemic.

The issue had no easy solution. Dignity Village, a local, 25-acre homeless encampment, had started out as an effort to help people who had been displaced by the closure of a tent city on private property. However, officials found that it was perpetuating homelessness rather than mitigating it — about 350 people had set up at Dignity Village as their semi-permanent dwelling place.

Gainesville Fire and Rescue had begun responding to calls for assistance 3-4 times per day at Dignity Village. The COVID-19 pandemic only complicated matters by raising further questions about the health and safety of the city’s homeless population as well as their interactions with the community.

Dignity Village was located next to GRACE Marketplace, a large, local homeless shelter and provider that operates on city property and is financially supported by the city. In October 2019, GRACE compiled a roster of everyone living in Dignity Village and had an outreach team meet with residents to assess needs and facilitate conversations about moving from homelessness to housing.

Gainesville ultimately worked with other advocates to transition homeless individuals into housing. Case conferencing, housing prioritization and trauma-informed street outreach were used in the transitioning process.

Altogether, closing Dignity Village cost $733,099, all of which the city incurred. Those costs included the city hiring a full-time liaison to help with the outreach and transition of residents, as well as establishing a dedicated police outreach team to work with people without housing in downtown Gainesville.

Gainesville also introduced an eight-week food program called FeedGNV with the Greater Gainesville Chamber of Commerce in which the city bought grab-and-go meals from local restaurants adversely impacted by the pandemic. GRACE distributed the meals to Dignity Village.

Dignity Village was closed by November 2020, and only 20 percent of homeless persons on GRACE’s original list remain on the list. Each person has an assigned housing specialist working with them regularly. Today, Gainesville Fire Rescue sees under one response a day towards homelessness calls, compared to 3-4 responses per day. Weekly calls from Gainesville Police Department have declined by 75 percent since Dignity Village was closed.

“The closure of Dignity Village… is the best demonstration of how communities have evolved on the issue of homelessness. Today, we recognize more than ever the importance of moving people off the streets into permanent housing as the only solution to homelessness and to do it with a focus on treating each neighbor with love, dignity and respect,” Gainesville Assistant City Manager Deborah Bowie said.