The Mouse River, with assets from Minot's project. Image courtesy of City of Minot. 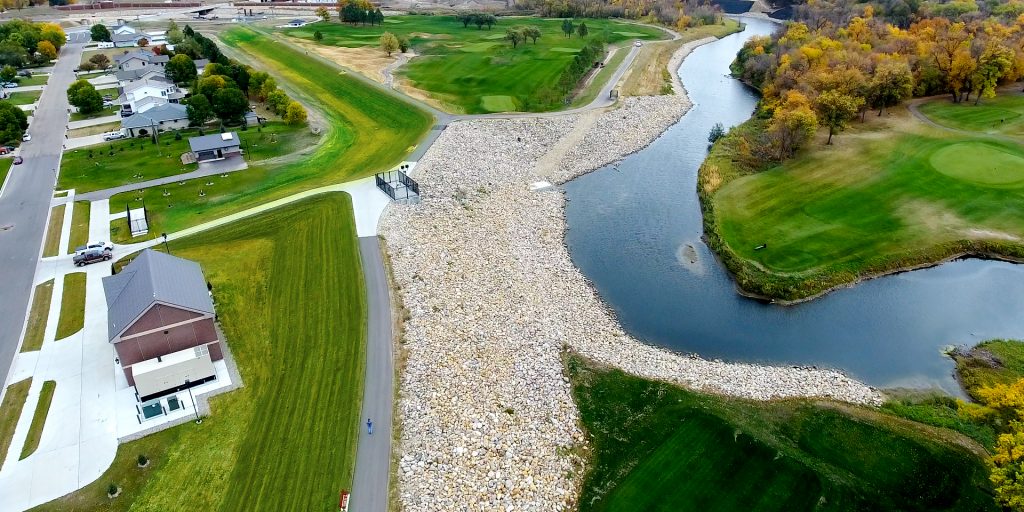 Phases 2 and 3 of Minot, N.D.’s Mouse River Enhanced Flood Protection Plan involved numerous federal, state and local entities, several setbacks, years to complete and $40 million. But the result was a multi-faceted flooding defense that Minot was able to make its own.

Historic flooding of the Mouse River in June 2011 created the need for the project. Comparable flows hadn’t been seen since 1882, and the flooding caused over $690 million in building and content damages to over 4,700 structures in McHenry County, N.D., and Ward County, N.D.

Flood fighting measures were implemented, but the flood overwhelmed a lot of the measures. Local governments realized that a plan was needed to give direction and protect the Mouse River community during future events. The project was separated into three phases, as well as a stand alone flood mitigation project around the Minot water treatment plant.

Many of the hurdles concerned federal permitting. The Souris River Joint Board (SRJB) — which includes members from four counties and Minot — had to get permission from the U.S. Army Corps of Engineers and the Federal Emergency Management Administration (FEMA), as well as satisfy National Environmental Policy Act (NEPA) requirements. The board also had to issue a request to the North Dakota State Water Commission for the project.

The federal permits and permissions took years to complete. However, advance construction of certain features of phases 2 and 3 were able to commence. A dog park and five acres of a municipal golf course were in the project’s construction area, so temporary accommodations were built to mitigate impact. A 27 acre stormwater retention facility was also built in the upper basin.

Meanwhile, designing phases 2 and 3 required Minot to coordinate with the Minot Park District, the Ward County Resource Board and the SJRB. The general public also gave input through open house presentations and social media.

Altogether, numerous moving parts were involved in this project. Construction of phases 2 and 3 began in Minot in May 2018 and cost $40 million. Funding came from Federal Housing and Urban Development (HUD) dollars, funds through the National Disaster Resiliency competition, state cost share and local cost share. The local cost share came from a voter-approved sales tax and bonding.

Final completion occurred in October 2020. When the dust settled though, phases 2 and 3 contained a number of features:

Additionally, Minot was able to weave the project’s flood risk reduction into its community’s social fabric. The city accomplished this with the following features:

Minot Director of Public Works and SRJB Director Dan Jonasson, called the project, “an exemplary example of what can be accomplished when numerous… entities come together and collaborate to find solutions to funding, permitting, construction, operation and maintenance of critical flood control infrastructure, while also incorporating community amenities… to lessen the impact to the immediate residents.”