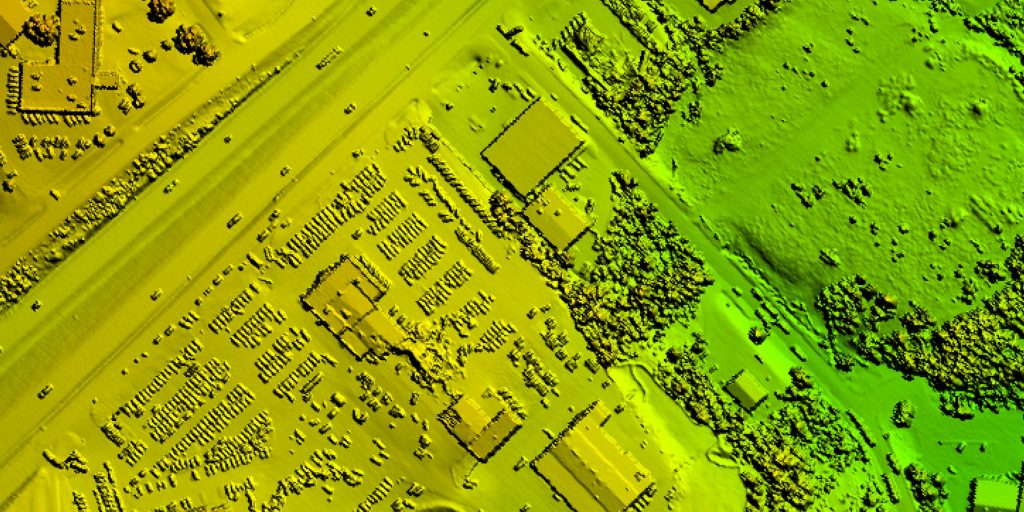 When disasters strike, affected communities are overwhelmed by the need to respond in the aftermath of the event. After the initial shock passes, the focus turns to recovery efforts, damage assessment and improved planning to minimize risk and damage of future disasters. Aerial mapping data is an invaluable tool for these post-disaster activities, as several Surdex clients have discovered. In recent years, we have completed numerous disaster mapping projects for tornadoes and flooding. The datasets produced have included 1’ and 6” Ground Sample Distance (GSD) 4-band orthoimagery and QL1 and QL2 lidar data. Since the primary concern in such situations is to have the data ready as quickly as possible, especially for first responders, Surdex has developed rapid response disaster mapping procedures that enable us to post data online within 2-5 business days of acquisition. 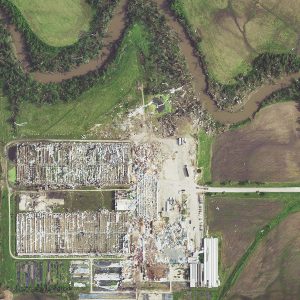 Meramec River Flooding: In the spring of 2017, the St. Louis area (our hometown) experienced record flooding along the Meramec River due to heavy rainfall. Surdex felt that local communities would benefit from having flood data, so we acquired 1’ GSD orthoimagery of 620 square miles of the flooded Meramec River and Big River watersheds as close to peak flood as possible. The rain continued to fall intermittently, so we had to complete two separate flight missions in the same day to ensure proper coverage of the project area despite the presence of scattered clouds. This imagery was used in post-event meetings with the U.S. Army Corps of Engineers (USACE), Missouri Senator Roy Blunt, U.S. Representative Ann Wagner and local officials to address future remediation from the damage.

Hurricane Harvey Flooding: In the late summer of 2017, Hurricane Harvey hit the coast of Texas, resulting in extreme flooding. The Houston-Galveston Area Council (H-GAC) contracted with Surdex to acquire over 10,000 square miles of orthoimagery at 1’ GSD of the flooded area. H-GAC hosted USACE staff in their office so they could use the imagery for flood analysis and response. 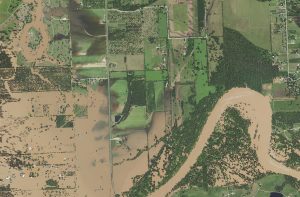 Major River Flooding in the Midwest: Major rainfalls in the spring and summer of 2019 resulted in five different imagery projects through our Indefinite Delivery/Indefinite Quantity (IDIQ) contract with the USACE – St. Louis District. These projects included a total of approximately 12,000 square miles of orthoimagery at 1’ GSD including portions of the Mississippi, Missouri, Illinois, and Arkansas Rivers in various areas of the central United States. Each of these projects required rapid imagery acquisition and data delivery for the USACE customers.  Surdex deployed multiple aircraft for each of these time-sensitive acquisition efforts.

Southeastern Nebraska Flooding: The rainfall that caused the flooding in the five USACE projects above also led to a separate flooding project in Southeastern Nebraska. Funded by FEMA, this project was awarded to the Merrick-Surdex Joint Venture by the USGS as part of the Geospatial Products and Services Contract V3 (GPSC3).  Under this task order, Surdex acquired and processed 3,674 square miles of 6” GSD orthoimagery and acquired 3,084 square miles of QL1 lidar data covering flooded areas of the Missouri River and its watershed in Nebraska. 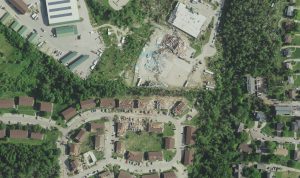 Jefferson City, Missouri, Tornado: In late May of 2019, Surdex was contracted to acquire imagery of the aftermath of two different tornadoes. The first tornado hit the Jefferson City, Missouri, area.  Surdex has a Statewide Contract for Photogrammetric Mapping Products and Services with the State of Missouri that was utilized to complete this mapping project. Within hours of the event, state officials contacted Surdex to collect 56 square miles of 6” GSD orthoimagery and QL2 lidar data. Surdex deployed two aircraft in order to acquire both types of data simultaneously. This project was made possible through 1) quick collaboration among numerous entities in the geospatial community in Missouri fostered by the Missouri GIS Advisory Council (MGISAC) and 2) Surdex’s existing contract with the State of Missouri. 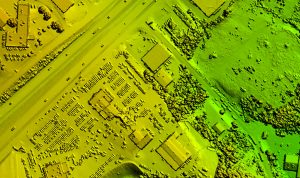 Rapid delivery of data is a top priority during a disaster. To avoid the weeks or months of time required by traditional Request for Proposal (RFP) processes, public entities can expedite a mapping project by having a Master Services Agreement or IDIQ-style contract in place. This enables them to establish a project for post-disaster imagery quickly. Such contracting was in place for our USACE flooding projects as well as the two tornado projects. Surdex also has a General Services Administration (GSA) contract and is approved through the GSA’s Disaster Purchasing Program.

Because the priority in a disaster mapping project is speed, acquisition specifications are often less restrictive for a disaster mapping project than for a typical orthoimagery project. To assure acquisition is achieved in a timely fashion, the sun angle and cloud cover constraints are usually relaxed.  Surdex also typically lowers the minimum acquisition sun angle from 30 degrees to 20 degrees.  In addition, because acquisition of flooding often occurs when skies are cloudy, the accepted cloud cover percentage is increased from 5-10% to 20%.

The right tools for the right job:

Four key technical components are essential to the success of our disaster mapping projects:

Surdex has a fleet of ten aircraft, but our disaster mapping projects rely on the performance and endurance of our four Cessna 441 Conquests. They have a cross-country speed of 300 knots and can fly on a single tank of fuel for 7 hours. This endurance enables quick deployment and extended flight time, which expedites acquisition.

Surdex operates five ADS100 large-format pushbroom digital image sensors. They have one of the widest swath widths of sensors on the market today, and they produce significantly fewer seamlines than frame cameras. This reduction in the number of seamlines equates to significantly less image processing time.

Surdex has developed custom software for the exploitation of ADS100 imagery.  This software automates the loading of images from the field as well as the orthorectification process.  With the use of parallel processing applications, Surdex orthophotography software can process thousands of square miles of raw aerial imagery into orthorectified imagery in a few hours.  While this imagery does not have all the refinements of fully processed and rectified orthoimagery, it provides the ideal balance of speed, image quality and accuracy necessary for disaster mapping.

Surdex developed an online image display service that we have been using for several years, and we continue to develop new viewing functions including the addition of lidar data viewing which was first implemented for our Jefferson City tornado project.  This service is invaluable to clients seeking post-disaster data, as it enables them to use imagery and lidar data for response and recovery efforts far in advance of traditional final product delivery. Our processed data can usually be posted within 2-5 business days of acquisition, whereas production and delivery of final data may take 1 or 2 weeks.

The imagery display service can be accessed via desktop, laptop, and even mobile phone, as it can be viewed in any browser without special plug-ins. For some projects, in addition to our imagery preview service, our disaster imagery has been hosted on other sites simultaneously to increase user capacity and ensure continuous accessibility. The Jefferson City tornado imagery and lidar data, for example, were hosted on Missouri Spatial Data Information Service (MSDIS), Esri and Surdex web services. When properly coordinated, these systems provide time-critical information to a very large group of end users quickly, through any device with Internet access.

To readily identify areas affected by a disaster, users can employ the swipe tool function in the Surdex web viewer that compares two datasets. This can display pre-disaster and post-disaster imagery/lidar data to reveal areas of change, or it can be used to compare natural color (red, green, blue) imagery to color infrared (CIR) imagery. For projects such as our Jefferson City tornado project, which included imagery and lidar, the two datasets can be compared with the swipe tool which provides an enhanced view of damage caused by a disaster.

We can provide flight date and time data in this imagery web service as well. This information is useful for comparison to precipitation and other weather-related data. For example, users can compare the imagery acquisition time to USGS stream gauge data and determine whether imagery was acquired before, during or after the peak of flooding.

Disaster mapping aids with response and planning for numerous entities

Numerous end users benefit from disaster mapping, and they use it for a wide range of tasks. Imagery enables faster and more effective responsive action after a serious weather event. The following entities have benefitted from our post-disaster imagery service:

The preliminary imagery from these projects can help with recovery and response, including floodwater and roadway management. Once the imagery is processed further, it can be used for damage assessment, rehabilitation, debris management, roadway maintenance and repair, and planning for potential future disasters. Lidar data provides another view of the physical impact from weather events. For the Nebraska USGS/FEMA post-flood project, lidar was used to evaluate levee damage to assist in restoration and repair. Esri processed the lidar data for the Jefferson City tornado project to enable roof damage assessment, and FEMA asked them to present on their procedures and results.

During disaster recovery activities, Surdex has found that the dissemination of data is challenging.  While our clients have access to the acquired mapping data via a password-protected web viewer, there are often other entities that would benefit from the use this data in the aftermath of a severe weather event.  To facilitate expanded use of our disaster mapping datasets, multiple online viewing services have been created for some of our projects to assist more first responders and government agencies in their assessment and recovery activities.