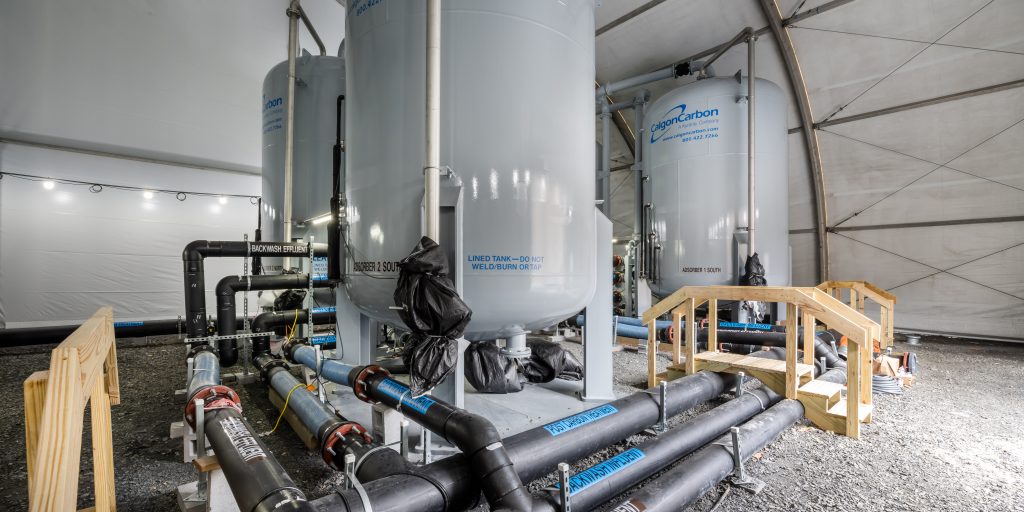 Perfluoroalkyl substances (PFAS) is a group of over 4,700 compounds used in the manufacturing of non-stick and waterproof coatings, personal products and fire suppression foams commonly found at airports or air force bases. These long molecular chain fluoride and carbon chemicals are resilient and exposure is believed to be linked to numerous health risks.

PFAS has been used in commercial products since the 1940s. We come into contact with PFAS through the things we buy, like furniture and clothing, but according to the EPA, most drinking water contamination results from living near facilities that handle products containing PFAS. The source of contamination found in New Windsor, New York’s Butterhill Wells is still under investigation. One possible source is the Stewart Air Force Base, which is about 5 miles northwest of the aquifer that sources the wells. Fire suppression foams have been used at the base for decades.

For local government officials and decision makers, recent media coverage of the issue has created a need for some high school chemistry: parts per trillion, compounds, molecular chains, AD-sorption and AB-sorption are all commonly used terms. As films like “Dark Waters” or “Erin Brockovich” remind us, no one wants to get this stuff wrong.

Unfortunately, PFAS chemicals – also known as “forever chemicals”– are still considered an “emerging contaminant.”  Federal oversight with clearly defined “safe” and “unsafe” thresholds has been absent, leading many states to set their own standards and regulatory consensus remains elusive. While many means and methods for treatment are being discussed, it’s hard to know what’s proven to work.  Because of these factors, our recent experience with the Town of Windsor, NY is of interest to many grappling with this issue. Our team designed, procured, and installed a PFAS treatment system for the Town of New Windsor in only four months.

The Town of New Windsor utilizes three ground water wells for water supply (the largest yielding municipal wells in the State of NY). Following the development of these wells, the Butterhill Water Treatment Plant was constructed, with a design capacity of 6.45 million gallons per day. The plant was designed to treat for elevated levels of iron and manganese, which was identified during well development. The plant went on line in August 2018, though distribution to customers did not start, in full, until October 2018.

Water samples taken by the NYS Department of Health in September 2018 tested positive for PFAS (PFOA and PFOS, in particular), though town officials and representatives were not told of these results until February 2019 (verbal confirmation only of a positive result was provided at that time). Additional water samples were collected the following day, with test results on those samples reported to the Town on April 1, 2019. Again, verbal confirmation of a positive test result was provided at that time. On April 4, 2019, town officials were first provided with a written report of test results. This was the first indication the Town had as to what the specific levels of PFOA and PFOS were in the water that sourced the Butterhill Wells. The levels detected were below the EPA public health advisory (PHA) and even the proposed maximum contaminant level (MCL), but out of an abundance of caution for its residents, the Town shut down the well field and returned to the Catskill Aqueduct for its source of supply.

Officials quickly realized they were on the clock when it came to solutions for the Butterhill plant. A planned maintenance closure of the Catskill Aqueduct was scheduled for November 2019, and the aquifer had just become the Town’s primary water source. LaBella’s Aztech Environmental team was retained by the NYSDEC to develop an effective solution to the contamination. The team turned to one of the most reliable treatment technologies available: carbon.

Granular activated carbon, or GAC, has long been used in water treatment because of its ability to adsorb (bind to the outside of the carbon, not be absorbed by it) most chemical compounds, while allowing clean water to pass through. In New Windsor, the system consisted of 10-foot diameter, 20,000-pound carbon units, which allowed Butterhill to produce 1,500 treated gallons per minute, for 2.16 million gallons per day (the balance of supply was provided by neighboring municipal systems and a smaller supply well, owned by the town).

All in, the Butterhill Treatment Plant was back online, producing water with undetectable PFAS contamination in only four months. Given the need for an emergency treatment facility, our team turned to carbon, which is readily available and easy to procure. Other methods of treatment include using Ion Exchange Resin, which offers some advantages and trade-offs. Whereas carbon will adsorb most organics, Ion exchange can be tailored to adsorb only certain compounds. This tailoring of treatment can extend the life of the treatment system and reduce media change outs. Resin vessels can also have a smaller footprint due to the lower residence time than carbon. Resin is, however, more costly than carbon and some resins cannot be regenerated and will require thermal destruction. Every water stream has its own constraints and all of the factors, including budget, need to be taken into account when choosing a treatment method and designing the plant.

Regardless of whether a carbon or resin treatment is selected, it is possible to treat your PFAS-contaminated water supply at the plant with a system like Butterhill’s. LaBella’s Aztech Environmental group was able to design, build and test that system utilizing in-house services. In other instances, Aztech has collaborated with town consultants and engineers to design and construct treatment systems. Available funding may depend on the source of contamination.

Cities located near potential PFAS sources should be testing for contamination regularly and pro-actively. Depending on your treatment plant and contamination levels, some cities and towns may elect to seek uncontaminated water sources elsewhere. However, cost-effective treatment is possible, and will likely become more refined with each community that tackles this challenge.