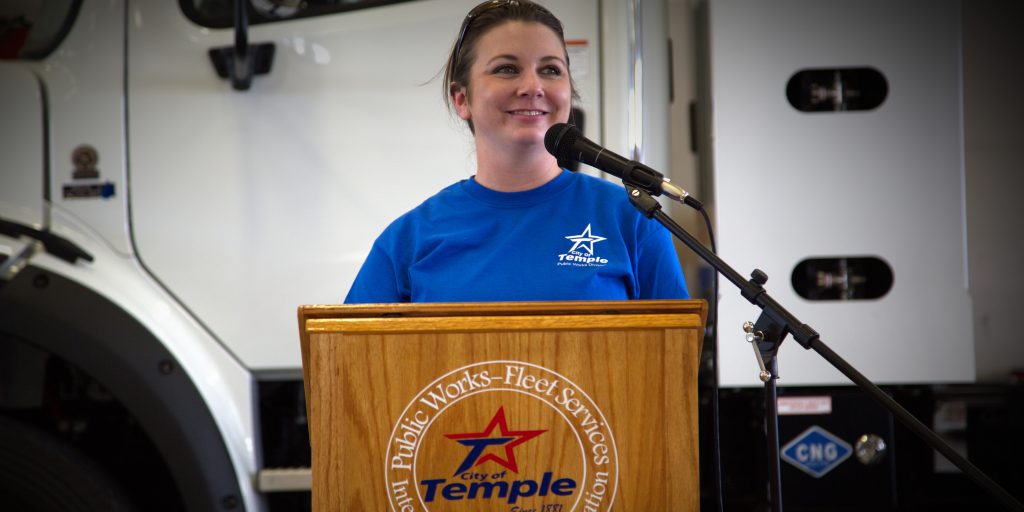 Plant trees in whose shade you shall never sit

Brynn Myers, the city manager of Temple, Texas, has been named American City & County’s 2019 Leader of the Year.

For her visionary thinking, her bold leadership and her impressive accomplishments, Brynn Myers, the city manager of Temple, Texas, has been named American City & County’s 2019 Leader of the Year.

Sewing Seeds
When she was appointed city manager, Myers told the city council a story she felt would set the tone of her service – one of bold leadership and forward-thinking decision making.

In 1962, Temple’s council made the very important decision to purchase the community’s water rights at a cost of $5 million. While this decision wasn’t widely accepted – it took political courage to follow through – it was critical for the future of the community.

“The water rights that they were purchasing, they didn’t need that year, five years, 10 years or even 50 years from then,” Myers says. “They were really looking out into the far-future of the community and taking action that day to set the city up for success in the long term.”
That type of visionary decision-making Myers seeks to bring to the community. She wants to make sure that while the day-to-day organizational responsibilities of running Temple are being met, while at the same time looking to the horizon for opportunities to help the city thrive generations from now.

“This isn’t for your needs, or maybe even your children’s needs, but maybe it will be for the betterment of your grandchildren or great grandchildren,” Myers says. “Identifying those things that we need to be planning for today so that we’re setting our community up for success in the future is really important to me.”

It was with this in mind, Myers set out to accomplish what she considers her greatest professional achievement, Temple’s first long-term strategic plan. Complete with five-year budgeting cycles, the plan lays out a coherent vision, mission and set of values to create a singular path forward for multiple city departments. This living document, she says, guides every step the government now takes.

“It was a big undertaking… all of the leadership teams as well as community members participated in,” Myers says. “I want to make sure we can make those 1962 decisions. In order to know what those are, we have to be planning. We have to be scanning the horizon and thinking 20, 30, 40 years from now and be really intentional in the direction we’re going.”

Brynn Myers: A History
Brynn Myers’s family has been involved in public service her entire life. When she was young, her father served on her hometown of Killeen, Texas’ city council, and growing up she was exposed to various aspects of local government.

She says she was always attracted to the work her father was doing, and when she was in high school, she had the opportunity to serve on Killeen’s Youth Advisory Commission, where she gained first-hand experience of what it’s like to work in government. She decided then this would be her life’s ambition, and after graduating from Sam Houston State University in Huntsville, Texas. There, she interned for the city and was eventually hired by the finance department, working her way up to budget manager.

“That was an amazing experience for me,” Myers says. “It allowed me to really develop a passion around how financial management, the budgeting process and the strategic planning process works together, and how that drives the success of your organization and community.”

The skills she learned as Huntsville’s budget manager translated well into her position as city manager in Temple. Starting as an assistant to the city manager, she worked closely with her predecessor to manage special projects and help set the course for Temple’s future. She worked her way up through the ranks until, In 2018, Myers made history when she took over, being appointed the first female city manager in Temple’s nearly 140-year history. What’s more – she accomplished all this by the age of 33.

While Myers says her age and gender have certainly caused struggles – she says she’s often the youngest person and only female in the room – she’s never felt held back in a significant way. “I’m not saying that the path has always been well-paved or that there haven’t been bumps and roadblocks along the way, but I’ve been incredibly blessed in the opportunities that I’ve had and in the ways that people have responded to and accepted me,” she says.

The Mind of a Leader
This acceptance, Myers says, has come from living out her philosophy that leadership isn’t derived from position alone. She says leadership isn’t something that you’re promoted into, but something more innate that’s personally and professionally fostered.

The credibility that comes with this attitude – with this type of leadership – she says, breaks down the barriers that stereotypes might build, and helps facilitate the types of bold action needed to drive a city’s organizational success.

“The work of local government is rewarding work, but it’s also hard work,” Myers says. “If you have a passion around what you’re doing, you’re going to be able to weather the hard times and thrive in the opportunity you’ve been given.”