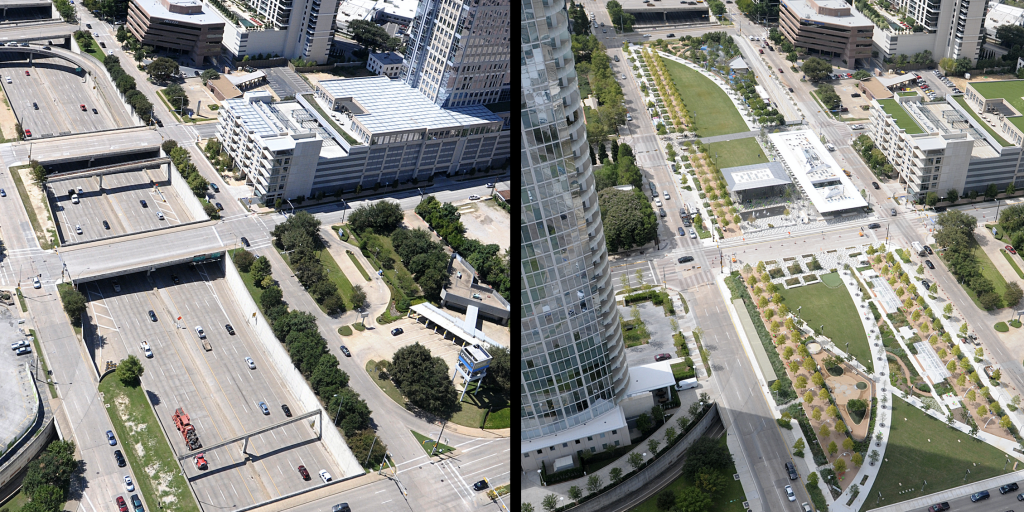 From freeway to walkway

Crosstown Boulevard, also known as I-579, carves right through Pittsburgh’s urban core, acting as a concrete partition between the Steel City’s downtown district and the historically black neighborhood known as the Hill District.

I-579 was built around Civic Arena, the home of the Pittsburgh Penguins NHL team until 2010. When the public Sports & Exhibition Authority of Pittsburgh and Allegheny County (SEA) were in talks to relocate the Penguins around 2009, SEA wanted to also physically reconnect the two areas, according to Doug Straley, the authority’s project executive.

Fast-forward 10 years. On June 14, the city broke ground on a deck to cover part of I-579 which, along with part of SEA’s land, will become an urban, greenspace-filled park to reconnect the downtown Pittsburgh and the Hill District, Straley says. Once completed around 2021, it will be an example of what is commonly called a freeway cap park.

Freeway cap parks aren’t a new concept. Seattle’s Freeway Park, which covers a stretch of I-5 that bisects downtown Seattle, was completed in 1976. However, the concept is gaining traction — freeway cap parks have been proposed in 30 cities, according to a January 2019 Wall Street Journal article.

Building a freeway cap park is a large-scale, time-consuming and costly undertaking that a large public-private partnership typically carries out. However, in addition to embedding a beautiful patch of green within a gray urban core, such a park can improve a city in many ways.

Freeway cap parks can increase city connectivity, reintegrate communities and increase property values. However, they also offer multiple health benefits, according to a study in the American Journal of Public Health by Sooyoung Kim et al. titled, “Cost-Effectiveness of Capping Freeways for Use as Parks: The New York Cross-Bronx Expressway Case Study.” Confining cars to a tunnel reduces air pollution and noise, while the land above provides people with increased area to take alternative transportation. The green space also gives people room to relax, gather and exercise.

Many point to Dallas’s Klyde Warren Park (KWP), which was completed in 2012, as a recent example of a freeway cap park done well. 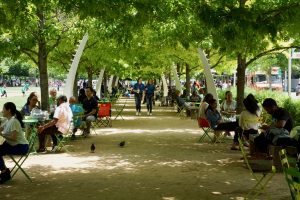 According to a USDOT study, 90.9 percent of surveyed visitors to Klyde Warren Park said that the park’s addition significantly improved their quality of life.

In an article about a freeway cap park movement in Atlanta, Atlanta Magazine called it a “striking success.” Economic development consulting firm HR&A called it a “remarkable success” after conducting an economic impact analysis for the park. The park has won a 2014 Urban Open Space Award from the Urban Land Institute, a 2017 Award of Excellence in General Design from the American Society of Landscape Architects and a 2018 Collaborative Achievement Award from the American Institute of Architects.

“More than any other single project, urban project of any kind, public or private, I think Klyde Warren has been the game changer for downtown Dallas,” says Dallas Parks and Recreation Department Director Willis Winters.

The 5.2-acre, $110 million KWP is built on top of the recessed Woodall Rodgers Freeway that divides Dallas’s uptown and downtown areas, according to a U.S. Department of Transportation (USDOT) case study.

The project was carried out and funded through a public-private partnership (P3). The Woodall Rodgers Foundation, which was founded in 2004, led the project from its beginning, according to KWP’s website. Former Dallas Mayor Laura Miller and two of the foundation’s co-founders, announced the formation of the P3 in February 2005, according to a foundation news release.

According to USDOT and Winters, USDOT contributed $16.7 million in stimulus funds, while the Texas Department of Transportation contributed $20 million and built the structure and deck on top of which the park sits.

The Dallas government, meanwhile, contributed $20 million in bond funds, and the Dallas Parks and Recreation department constructed the park on top of the deck, Winters says.

Winters, an architect by trade, notes that the deck and the park were major achievements, especially since no stairs are needed to get from one side of the park to another, and it doesn’t feel like it was elevated.

“Keeping the level of the park, the finished grade of the park, at street or sidewalk-level, level with the surrounding sidewalks, that was the critical thing,” he says. “It took quite a bit of technical and engineering achievement to make that all work out.”

One of the keys to success for the city’s work was having an inclusive design process with the project’s architect while sourcing lots of public input, Winters says.

Grant helped source what ultimately amounted to $50 million in private funds for the project’s construction. As these funds rolled in, the foundation also worked with an architect on the addition of a concert pavilion and a restaurant in the park, added as change orders to the park contract, Winters says.

“It’s an oasis in the middle of downtown Dallas, whereas before, it was just a nasty looking freeway,” Grant says.

Building the KWP deck began in October 2009, and the park opened in October 2012, according to the KWP site. A 50-year use agreement between the foundation and the city with four 10-year extensions governs how the park is managed post-construction, Grant says. The agreement specifies that, after construction, the city must maintain the tunnel beneath the park on an ongoing basis. The foundation, meanwhile, is entirely in charge of ongoing maintenance of the park.

“I think it’s a really good deal for the City of Dallas, that we don’t have any funding responsibility for the park on an annual basis,” Winters says.

Part of the foundation’s currently $5 million annual budget goes towards the programming in the park. The park has numerous public games and sports people can play and an outdoor reading room with books and news publications, Winters says. However, multiple fitness and yoga classes, storytelling sessions, musical acts, dog training, movie series, dance lessons, petting zoos and more occur in the park — and all of that programming is free for park visitors, according to former KWP President Tara Green. The site estimates that 1,300 free programs and events are held in KWP annually. 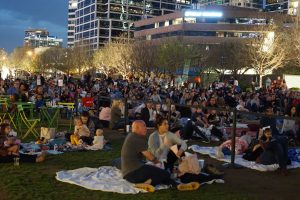 Klyde Warren Park hosts about 1,300 programs and events per year. Besides private parties, all of its events are free-of-charge.

Winters says that this free and open year-round programming and the success of KWP in general set expectations for the next generation of urban parks in Dallas. He notes that while it’s an urban park, KWP is differentiated in that it’s become a visitor destination park in Dallas akin to the Dallas Zoo and the Dallas Arboretum.

“I think it’s one of the most important, if not the most important park in Dallas from a combination of residents that live around the park and use it as their neighborhood park, visitors and… office workers,” he says.

Winters’ words are backed up by numbers. KWP has provided an estimated $312.7 million in economic benefit, $12.7 million in direct tax revenue and a 32 percent increase in adjacent commercial rents, according to the USDOT. Streetcar ridership has increased 61 percent due to the park, and 90.9 percent of surveyed KWP visitors said that the park’s addition significantly improved their quality of life. KWP’s trees also capture 18,500 lbs. of carbon dioxide each year and the park reduces stormwater drainage by 64,214 gallons each year.

The original master plan for KWP included an additional block to the west, and KWP is set to expand to include that block, Winters says. In October 2018, the Woodall Rodgers Park Foundation and VisitDallas announced an estimated $76 million, 1.2-acre expansion of the park over more of the recessed freeway, according to the KWP site. The expansion will include a 20,000 square foot visitor center as well as added greenspace and gathering spots. Grant estimates that construction will begin in 2020 and that it will take four years to conclude.

“By and large, the park has been a game changer in Dallas. It is a huge asset to the city,” Grant says.

Meanwhile in Pittsburgh, Straley hopes that the I-579 cap project will improve and revive the Hill District neighborhood while yielding opportunities for development in the area.

“We want the people in the area to be able to have a park that they can use and enjoy 365 days [a year], seven days a week,” Straley says. “We hope it gets the use that is needed in that area.”

If Klyde Warren Park is any example to go by, accomplishing those goals with a freeway cap park is definitely possible.