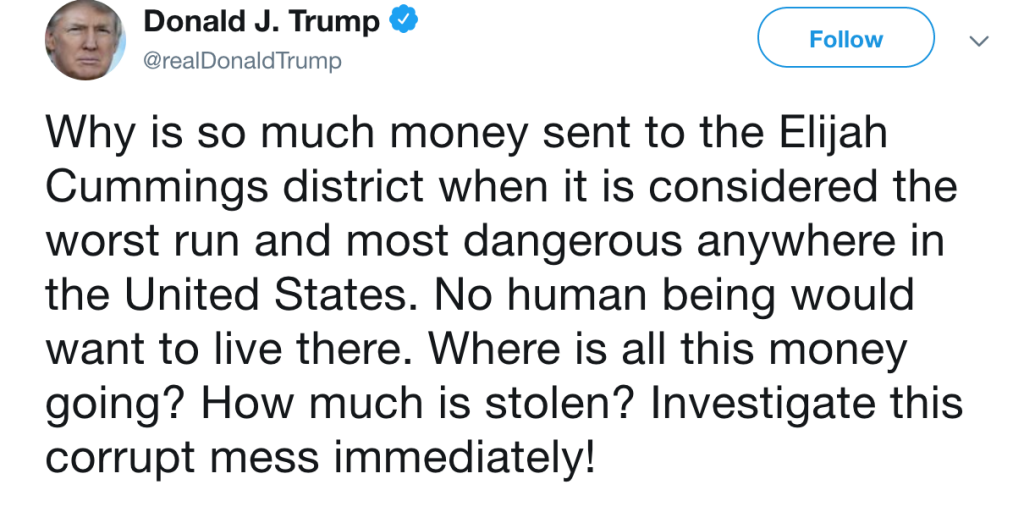 Public leaders across the US came to Baltimore’s defense after President Donald Trump insulted the city and one of its U.S. Representatives in a series of tweets.

Nine days later, Trump lashed out at Cummings in a series of tweets, commenting on the state of Cummings’ district in Baltimore.

Rep, Elijah Cummings has been a brutal bully, shouting and screaming at the great men & women of Border Patrol about conditions at the Southern Border, when actually his Baltimore district is FAR WORSE and more dangerous. His district is considered the Worst in the USA……

Baltimore Mayor Bernard “Jack” Young (D) tweeted an official statement condemning Trump’s tweets and his attacks on both Cummings and the city, Young called Trump’s language “hurtful and dangerous to the people he’s sworn to represent.” Young also called Trump “a disappointment to the people of Baltimore, our country and to the world.”

“I mean, if you want to help us, help us. Don’t talk about it, send the resources we need to rebuild America. He’s talking about he wants to ‘make American great again.’ Put the money in the cities that need it the most and that way you can make America great again,” Young told CNN.

Other local leaders across Maryland and the country have come to Baltimore’s defense. Baltimore County, Md., Executive Johnny Olszewski called Trump’s tweets an “attack on basic decency. His words and behavior should have no place in our politics or society” in a tweet.

“We are seeing a pattern from the president where disagreement results in specified attacks against people and the places they represent,” St. Petersburg Deputy Mayor Kanika Tomalin told 10News WTSP. “And the mayor and our entire team feel very strongly that we need to champion cities.”

“[Baltimore] is certainly a better place to be than the America the president wants us to live in,” St. Petersburg Mayor Rick Kriseman tweeted. “Urban cities aren’t perfect, but they are welcoming, diverse, vibrant & serve as engines of innovation. They make us great.”