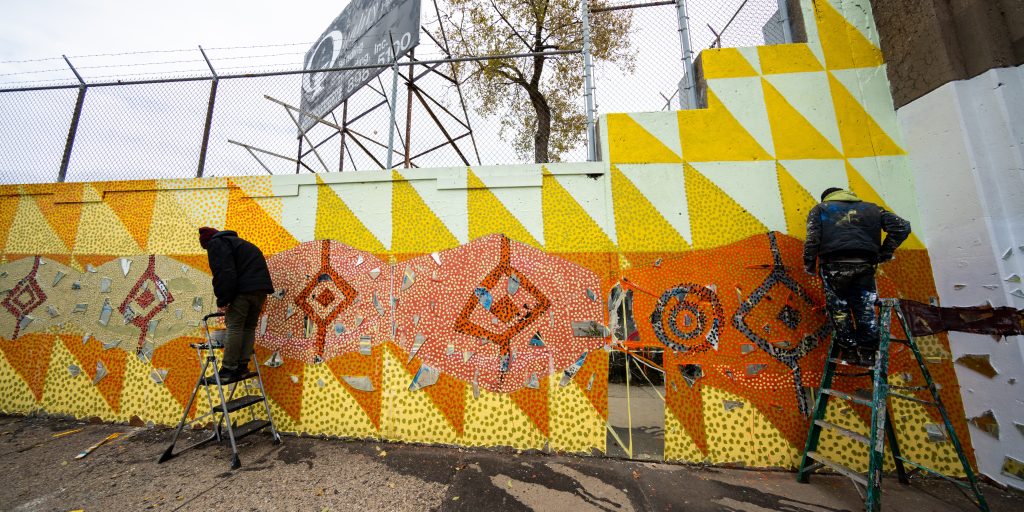 The art of transformation

Ask three people to consider a work of art, and each may well have a different reaction. However, that work would nevertheless accomplish a common feat for all three: it would make each person think about how they feel about it.

Public mural programs, which are growing in number, arguably offer disparities and commonalities in reverse. These programs offer similar results: they combat blight, beautify areas and contribute to a city’s cultural identity.

The reasons and methods for arriving at those results however, is where the disparities lie.

Sanford’s downtown historic district contains multiples buildings whose painted walls looked dilapidated in 2015. Liz Whitmore, a historic preservation planner for Sanford who also manages the city’s Mural Arts Program, proposed a mural program to her supervisor to beautify the buildings’ exteriors. Around the same time, Sanford’s mayor had begun calling to establish an arts district within the city.

Detroit’s City Walls program was preceded by the Detroit Beautification Project, a non-government project in which street artists from around the world came to Detroit starting around 2012 to legally paint murals across the city, according to a report from the Detroit Metro Times.

“The graffiti culture really blew up here around that time. There was sort of a renaissance and it exploded,” says Zak Meers, who manages Detroit’s City Walls program as well as the city’s graffiti removal program within the Detroit General Services Department. Thus, graffiti spread across the city and became an issue. 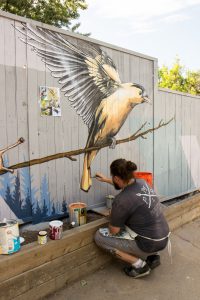 In 2015, the Detroit government was about to implement a beautification and infrastructural improvement project, and Meers pitched a public art arm to the program.

Among other projects, he proposed a blight abatement residency program where three local artists each year would participate in a five-month summer residency in which they paint murals in the city. This program’s first season occurred in 2017.

While Sanford’s program teaches about its past and Detroit’s addresses its present street art culture and blight issues, Boulder’s Creative Neighborhoods program emerged from a formal plan to inform its future cultural programming. Boulder adopted its community cultural plan in 2015 as a roadmap for the work that the Boulder Office of Arts and Culture would carry out in the years to come, according to Mandy Vink, manager of Boulder’s public art program.

From the start, Boulder officials wanted to place murals in each of Boulder’s nine neighborhoods. With enough funding for 10 murals, the program staff issued a call to property owners to participate in a “very loose application process” for these murals, Vink says. The staff chose the murals’ locations on a first-come-first-serve basis, while ensuring that each neighborhood in the city had a mural.

In contrast, blight abatement is a major influencer of mural placement for Detroit’s City Walls program. In creating the program, Meers used city data to locate the most repeatedly-tagged locations in Detroit. It was in these spots that murals were initially placed. Property owners later reached out to the city, and eventually received murals on their properties. Additionally, some arts organizations told Meers they possessed funding and artists but needed permission to paint murals, so Meers used city resources to allow murals to be created.

The extent of Detroit’s partnerships with its murals was so great that although Detroit aspired to implement 12 murals in City Walls’ first season, the city was a part of 30 murals that went up that year, Meers says.

While Sanford’s mural program initially covered only the downtown historic district, it has since expanded to include other parts of downtown Sanford, according to Whitmore. Since moving out of the historic district, Sanford tries to paint murals only on established businesses, Whitmore says.

Most of Sanford’s murals stem from group conversations, Whitmore says. When she has approached property owners about placing a mural on their walls that won’t cost them anything, most have agreed to the idea.

A Sanford mural’s chief subject matter is determined before the artist is selected. Since each mural represents part of Sanford’s history, Whitmore writes a request for proposal (RFP) to artists for each mural that includes written history, newspaper articles, photos and information about the wall. The RFP is then shared with a list of artists on social media and with the North Carolina Arts Council, she says. Artists are ultimately selected based on the designs they submit. 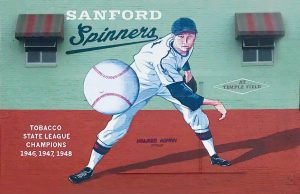 The murals created as part of the Sanford, N.C. Mural Arts Program each highlight a part of Sanford’s history.

In Boulder, muralists are given more artistic freedom to decide on the content of their work. Prior to taking applications for murals, Boulder assembled a roster of 68 artists with links to their art. Property owners choose artists they want to paint their mural based on aesthetics; property owners do not dictate the content, but artists connect with them and build the mural design together, Vink says.

While the government establishes the artist-property owner connection, it steps back from content discussions. “We really understood that the community members within the city of Boulder really wanted to find a way to be creatively expressive within this community, and sometimes, that simply means that the government needs to get out of the way,” Vink says.

Locality of the muralists is an important commonality to each program. The artists who participate in Boulder’s Creative Neighborhoods program all live in the Front Range Corridor region of Colorado and southern Wyoming. Meanwhile, Sanford’s muralists are all based in North Carolina and Detroit’s City Walls program sources Detroit resident artists.

Detroit relies on a local arts organization to curate artists for its blight abatement part of City Walls. The artists who participate in it however, take full artistic license for their murals’ content, and they’re also able to pitch walls they think should be given murals.

“[The program’s artists] had a style that we kind of knew what to expect from them… we don’t really want to be into the whole curation of content,” Meers, a former muralist himself, explains. “We want the community to drive that, and we want the artist to drive that and to have the freedom to be able to express themselves.”

The creation time and costs for murals differ widely, with specific artists and mural size being determining factors.  Both Boulder and Detroit’s programs are entirely city funded, but the majority of funding for Sanford’s murals comes from private donations, Whitmore says.

However, the benefits those funds buy are similar across the board in that these programs have beautified areas while giving a sense of place and community. 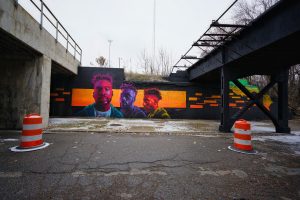 Starting in 2017, three Detroit artists have been selected each year for a five-month, city-funded residency in which they paint murals on heavily-tagged areas or on properties on which owners request murals.

In Boulder, Vink notes that the city offered a bus and bike tour of the murals in November to showcase them, and that anecdotes of passersby noticing the murals made witnessing them an event in itself.

“Just knowing that we had more demand than we could fulfill… was really exciting because we were just trying this out and really had no expectation of what the applications would be,” she says.

For Meers, Detroit’s murals are effective at reducing blight, but they’re not so much of an anti-graffiti tool as they are a means of empowering locals to get involved in their communities.

Whitmore says that the murals have been a great tool to help with blight. The fact that Sanford’s murals tell its story also contribute to the benefits they bring to the city. “All of this history would have been lost,” she says. “So our murals will keep our history alive.”

Additionally, Sanford’s murals have attracted interest within the state and outside of it. But they also give locals a greater sense of place within the community.

“I think it gives people a sense of pride and place,” she explains. “This is an important place. So I think what it does is it gives people the tools to reflect upon their heritage and their surroundings.”