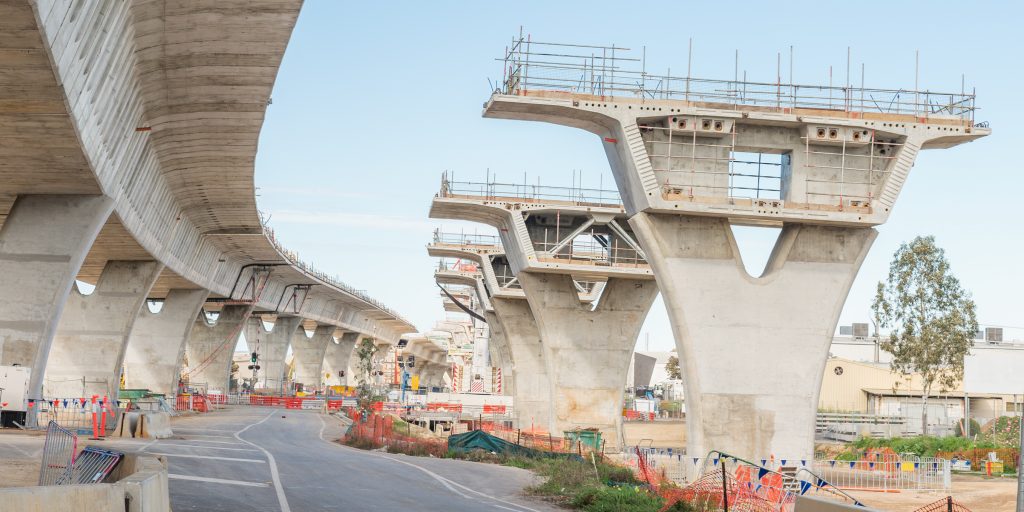 If placed end-to-end, the structurally deficient bridges in America would stretch from Miami to New York City.

Infrastructure in this country is crumbling and will continue to get worse at an alarming rate unless government leaders immediately take action.

Bridge infrastructure is particularly troubling. According to the most recent report from the American Road and Transportation Builders Association (ARTBA), 54,259 of the nation’s 612,677 bridges are classified as “structurally deficient. If placed end-to-end, these bridges would span the distance from New York City to Miami. Data shows cars, trucks and school buses cross these compromised structures 175 million times every day. While many of these bridges aren’t imminently unsafe, they are in need of immediate attention.

Brittney Kohler, program director for infrastructure at the National League of Cities, points out the problem is mostly at a local level. “When you look the national bridge inventory… when we talk about the structurally deficient bridges in the country – the bad bridges, the bridges that engineers have to go check and monitor to make sure nothing’s going to happen to the public – that list of bridges shows most of the trouble areas are off the national highway system.”

Of the bridges that are structurally deficient, 76 percent of them belong to cities and counties, she adds. “When we’re looking at these numbers and you start comparing the statistics on national highway system compared to those that aren’t – there’s a great divide there.”

Andy Herrmann, former president of the American Society of Civil Engineers (ASCE) and the group’s go-to bridge expert, agrees the situation needs to be prioritized – if not, dangerous situations can arise quickly.

Every four years, the ASCE puts out a report card that grades America’s infrastructure, dividing it into 16 categories, including everything from dams, waterways and ports to schools, transit systems and public parks. In the 2017 report, bridges received a lackluster C+.

It’s worth noting that some communities are working to solve the problem, Herrmann says, pointing out that over the years the number of bridges considered structurally deficient is actually decreasing, but the task is Sisyphean due to the age of these structures. For every bridge a community repairs, several more approach the end of their functional lifespans.

Herrmann explains most of America’s bridges were built during the 50’s and 60’s during the interstate highway system’s massive expansion, meaning they are all on the same timeline for becoming obsolete. “The average age of bridges is 43 years old, and 39 percent of them are over 50 years old,” he says. “If you go back to when those bridges were designed, they were probably designed for a 50-year life.”

Kohler compares this critical point to the “silver tsunami” – the term used to describe the mass exodus of Baby Boomers from the workplace due to huge numbers of them reaching retirement age at the same time. “If you look at the data, almost four out of ten of our bridges are 50 years or older, and that’s generally the lifespan that’s expected,” she says.

Kohler notes another related problem complicating this issue for local leaders – incomplete, outdated data. “The bridge information that you’re actually getting in the 2017 release of the [Federal Highway Administration’s] bridge inventory is actually 2015 data,” she says. “That means that on the cusp of 2019, we’re still working off of 2015’s best idea of where we are.” With bridges reaching the end of their lifespan every day, this lag in data is a significant challenge. “Just tracking where we are so Congress can make good decisions so that cities and states can make good decisions about their infrastructure – it’s a shame we’re lagging so far behind on that.”

Further complicating the issue, Herrmann says, is the fact most communities haven’t been keeping up with the maintenance their bridges have required through the years. “Think about your car,” he says. “You change the oil every couple thousand miles and the motor runs nicely. If you don’t change that oil – well – you shorten the life of your engine. It’s the same thing with bridges.”

The responsibility is ours, but this lack of prioritization is understandable, Herrmann says. Municipal and county resources are stretched thin, and the federal gas tax hasn’t been updated in years. It’s easy to let repairs fall by the wayside in favor of more pressing projects. However, if the preverbal can continues to be kicked down the road, eventually it will hit a dead end.

The solution, Herrmann and Kohler both agree, is for local leaders to work together to prioritize investing in the issue. One community that is doing is Licking County, Ohio. Ohio ranks twelfth on ARTBA’s list of structurally deficient bridges, with 1,653 of its 27,345 found to be in disrepair. However, communities in the state have been working hard to improve their situation. ARTBA’s data shows a 14.9 percent reduction in the number of structurally deficient bridges in the state from 2016 to 2017.

American City & County contacted Jared Knerr, county engineer in Licking County, Ohio, and Dan Kent, senior structural engineer with Gannett Fleming of Columbus, Ohio, to explain how one county systematically addressed its aging bridge infrastructure. The following Q&A illustrates the problems many communities are facing and potential solutions that could be applied across the country.

Question: Most municipalities address a few key infrastructure upgrades or repairs a year. When did you realize you needed a formal bridge repair or replace program for more than 150 assets?

Jared Knerr: The county staff was prepared to replace two to six bridges or large culverts a year, which is typical of most upkeep programs. But we were surprised to get some calls about structural assets we didn’t have in our inventory. That led us to drive every road in the county – with maps in hand – to check our assets. This inspection revealed 101 bridges that we nicknamed “orphan bridges” because they hadn’t been accounted for in the Licking County bridge program.

To put it another way, we went from being responsible for 331 large culverts and bridges to 432. Our typical upkeep plan would no longer work since a portion of the orphan bridges were in poor condition and in need of repairs.

Dan Kent: That’s a huge undertaking, but when safety and ease of transportation are at stake, no one wants to be surprised. When inspectors evaluated some of these orphan structures, we saw paint marks to indicate they had been examined at some point, but we could not find an inspection record.

Kent: A total of 158 problematic structures made it onto the list, so we needed a more specific ranking system than the one in the FHWA Bridge Inspector’s Reference Manual. Licking County’s 0-5 matrix used numbers and colors, with a “0-Red” indicating the structure should be closed immediately and a “5-Purple” indicating those that could be left alone for up to the next five years and required annual or bi-annual monitoring and eventual repairs. We also created a simple summary report for each asset to define the type of bridge, document the specific deterioration that was of concern, and provide pictures.

Knerr: We obviously prioritized the safety of our 170,000 residents first – we looked at which bridges carried the most traffic and would most impact the residents. One of the bridges couldn’t support large load vehicles, like garbage trucks, so for a very short time residents had to carry their trash to the bottom of the bridge. That repair was moved up on the list and took priority.

Q: What were the benefits of having county engineers and consultant engineers working together on the project?

Kent: It’s unusual for a county to have the construction staff who can handle these types of challenges on a large number of bridge assets. Licking County staff had skilled workers who could repair and/or replace smaller structures. We worked with them not only to identify the problem bridges and large culverts but to put together a plan to replace smaller bridges with typical structure types that minimize longer-term maintenance and give the county staff the ability to repeat similar replacements or repairs. The new structure types we proposed were similar new construction, such as new box culverts; new, shorter concrete box beam bridges; etc. So, we were able to work closely with them to simultaneously complete multiple repairs or replacements and their staff was able to repeat the type of work on multiple smaller bridges.

Knerr: Having Gannett Fleming on board gave us a strong team to address the amount of work at hand: the inventory and inspections, the review, and the number of immediate, emergency repairs needed.

Q: Funding is a common obstacle for infrastructure improvements. How did the county fund such a large-scale endeavor?

Knerr: The systematic approach was helpful in acquiring funding. First, we tried to deploy cost-saving measures whenever possible, like using longer life-span solutions and implementing the same design multiple times. We also used our own county staff to design and construct the smaller structures. But, no matter how frugal we were, it was never going to pay for 158 structures.

Kent: Even though the county budget was already set, the coding system and summary reports clearly illustrated the urgency of the situation to the commissioners. They were able to read through simple reports and see rusty beams, broken wingwalls and collapsing supports.

The county commissioners raised the county conveyance fee on real estate sales, increased the licensing fee for annual vehicle registration renewal, and allotted excess general funds and bonds. These measures totaled an estimated $18 million for the bridge replacements and repairs in the program.

Q: Now, four years into this program, what does the future hold for Licking County?

Knerr: We’re in a much more stable position because we have addressed the majority of the 158 deteriorating structures on the initial list. We also have five larger bridges programmed out through 2024 through the County Engineers Association of Ohio. That said, there are still more than 30 bridges to address before this initial repair and replace plan is complete.

Kent: That’s the nature of what we do – while we’ve been repairing and replacing these critical bridges and large culverts over the past four years, others have experienced wear and tear. There will always be more to inspect. The bridge inventory can transition over to being used to schedule regular maintenance and assessments. This data will serve Licking County for years to come.

Herrmann stresses that short-term cost savings in the form of delaying infrastructure maintenance only leads to more costly obligations in the future. Communities across the country need to get ahead of the game instead of falling behind and playing catch-up in this regard.

Kohler agrees. “What we’ve found is that there isn’t money to address the problems that exist, so a lot of the engineers and local officials’ time and energy gets spent dealing with the most pressing crisis,” she says. “There’s not as much opportunity to take that big step back and say ‘okay how are we strategically going to move forward on fixing these bridges.’”

When there’s more than one competing priority, local leaders need to make tough decisions; however, it’s time to get serious about prioritizing our bridge infrastructure, Kohler says. “When we talk to city officials about what their challenges are, we tell them to create a retirement plan for their bridges and major assets, particularly if you’re in a town that has limited population or resources.” Overall, safety needs to be a local leader’s primary concern, and it’s ultimately their responsibility to ensure infrastructure is up to date.