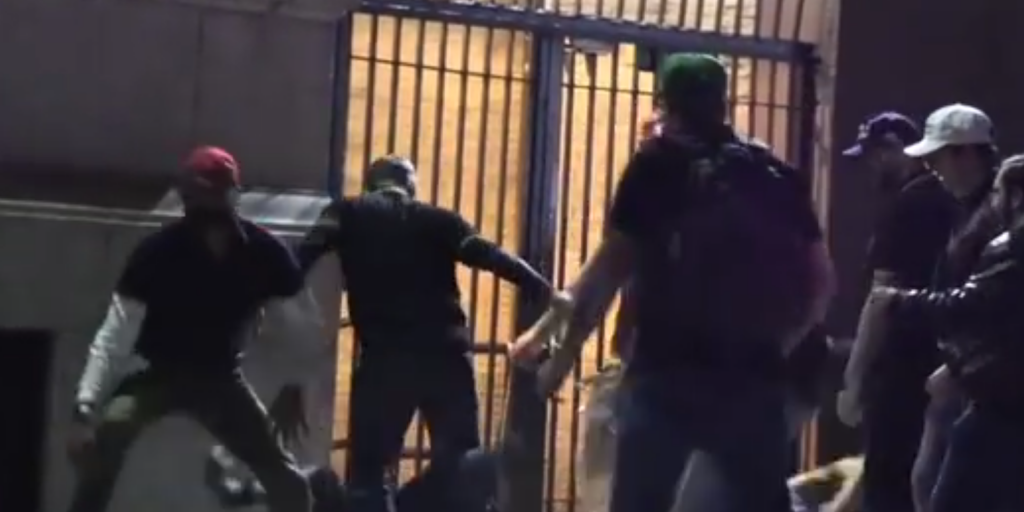 Violence between the extreme right and left prompts local action

The far right and left clashed violently this weekend on both coasts, with melees breaking out on the streets of Portland, Ore., and New York City between the Proud Boys, a “western chauvinist” hate group, and Anti-fascists (Antifa). The violence has frustrated and disheartened state and municipal officials and left many questioning police response to this type of confrontation.

On Oct. 12, Canadian founder of the Proud Boys, Gavin McInnes spoke to the New York Metropolitan Republican Club about “deep state socialists” and “western values,” common topics for the group of self-proclaimed western chauvinists. The Washington Post reports that after the speech, about two dozen Proud Boys exited the club and confronted a similarly sized group of protesters, including antifascists, or “Antifa,” members.

It’s unclear what sparked the violence. McInnes told the Huffington Post an Antifa activist stole one of the Proud Boy’s Make America Great Again (MAGA) hats and was in turn “tuned up.” Proud Boy tempers might have already been runny high by vandalism to the Metropolitan Republican Club’s headquarters ahead of McInnes’ visit, according to The New York Times.

Shay Horse, a photojournalist who was on the scene that night, described the attack to Buzzfeed News.

“I heard them screaming and swearing at some guy on the ground,” Horse said. “They were beating the shit out of him and kicking him in the head. One guy had his foot on the guy’s neck.”  The Proud Boys also used slurs and threats at the people on the ground, Horse said. “One dude started screaming, ‘Do you feel brave now, faggot?’”

No Proud Boys were arrested that night; however, The New York Times reports three counter-protesters were arrested for attacking a person leaving the event. The police inaction has prompted criticisms – officers were present at the time of the attacks, as video taken by freelance journalist Sandi Bachom demonstrates.

In response to the criticism of how the New York Police Department (NYPD) handled the situation, New York Mayor Bill de Blasio tweeted, “The NYPD is fully investigating last night’s attack involving the Proud Boys. If you know anything, the NYPD wants your help. Hate is never welcome in NYC and we will punish those responsible — whether they threw punches or incited violence — to the fullest extent of the law.”

The Federal Bureau of Investigation (FBI) is helping the NYPD investigate the violence, and the New York State Police hate crimes unit is assisting, The New York Times reports.

A night later, in Portland, Ore., a city known for seeing violent clashes between left and right, conservative demonstrators organized a “flash march for Law and Order” in response to two weeks of Black Lives Matter protests regarding a fatal police shooting in September, according to The Washington Post.

The far-right group Patriot Prayer organized the event, and on their Facebook event said the Proud Boys were “running security.”

Their march clashed with protesters – again, it’s not clear who started the violence – but it devolved into “an exponentially larger version of the Manhattan assault,” according to the Washington Post. While police broke up the fighting, again, no arrests were made, according to the Portland Tribune.

“I will not allow continued, planned street violence between rival factions to take place in Portland, Oregon,” Wheeler said at a press conference. “I have also asked my staff to evaluate options to hold accountable those who recklessly drain our public safety resources by using our city as a venue for planned street violence.”

The city council is expected to vote on the ordinance later this week, according to Willamette Week.