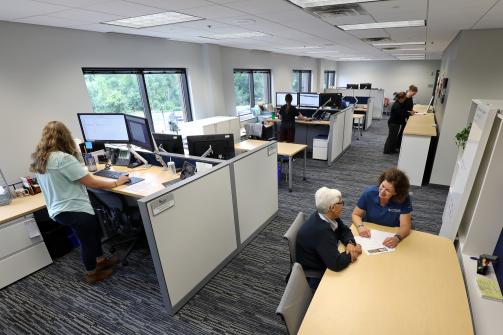 These are hallmarks of the traditional workplace, where private- and public-sector employees alike have spent 40-plus hours each week for decades. It’s a familiar layout, yet it’s one that’s also bland, uniform and largely uninspiring. However, it’s also a design that’s on the way out as work preferences and needs continue to change and inspire new office designs.

While these new designs are commonly being implemented in the private sector, some local governments are also introducing them into their renovated and new work spaces. In doing so, they’re finding benefits in a change of office culture and atmosphere.

Part of this design shift is due to generational change. The workforce is becoming more technologically savvy as Baby Boomers continue to retire and more Gen Xers and Millennials enter the workplace, says Peter Barsuk, government and industry leader and principal for global design firm Gensler. “What that’s doing now, is it’s causing us designers to look specifically at the way people work,” Barsuk says.

It appears people work better when they have the flexibility to work in multiple, customizable environments that also foster collaboration. These capabilities are embodied in recently completed work spaces within three cities: the first floor of Plymouth, Minn.’s city hall, which primarily houses its administrative services and parks and recreation departments (completed in March 2018), Nashville, Tenn.’s IT services (ITS) department (completed in December 2017) and Milton, Ga.’s new city hall offices (completed in March 2017). Moreover, these cities’ employees note an evident change in their offices’ atmosphere.

“I firmly believe that your work space absolutely, and your surroundings impact the work that you do,” says Keith Durbin, Nashville’s chief information officer and the director of Nashville ITS. “If you are happy or proud in your work area, that’s going to be reflected in your job.”

Possibly the most visible components of the change are the options for more customizable work spaces as well as the slew of different working environments that these new offices contain.

While Plymouth and Nashville retained cubicles in these new offices, they made changes to better suit a more modern work environment. Now, Nashville ITS’s cubicles are sectioned to place teams and divisions closer together, Durbin says. These areas also contain library tables with dividers to provide another nearby work space that is nevertheless amply spaced away from the cubicles.

These offices’ cubicles also supplanted stationary desks with sit-stand desks. “It’s healthier for all of us to be able to adjust how we’re at our desks all day — sometimes sitting, sometimes standing,” Plymouth Parks & Recreation Department Director Diane Evans says.

Milton took such customization a step further and implemented dimmable lighting and a new variable refrigerant flow HVAC system that gives staff members the ability to adjust the temperature in their personal work spaces, according to Bob Buscemi, Milton’s city architect.

“You’ve got to have staff enjoying the environment they’re in,” Buscemi says. “The nicer they feel the environment is, the more productivity you get from staff, you keep retention.” 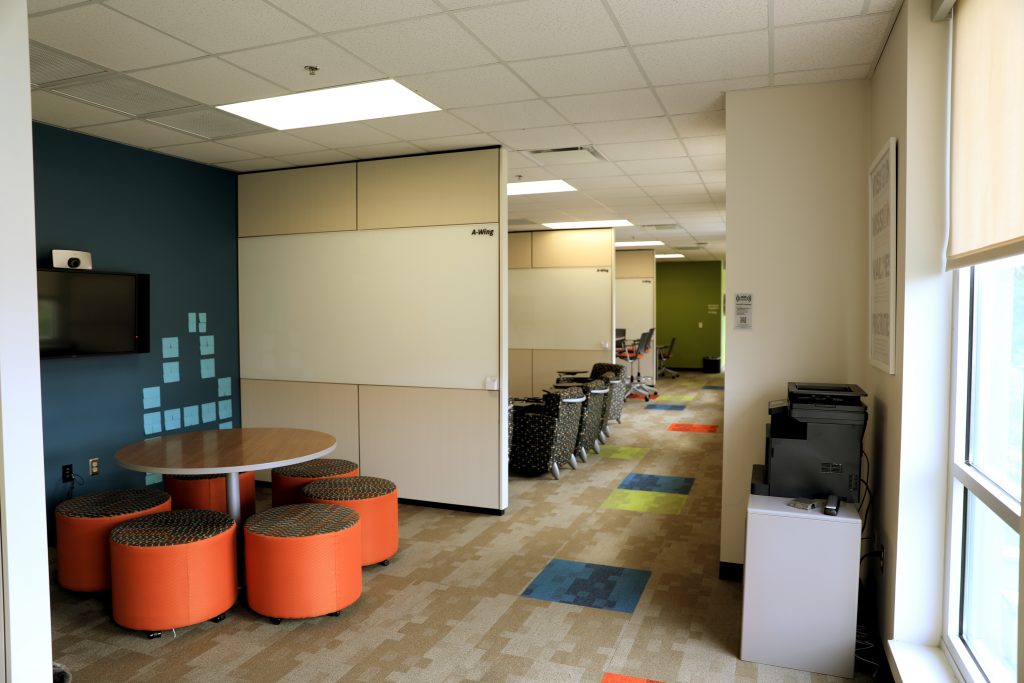 Instead of being confined to cubicles and the space around them however, workers in these new offices have the ability to work in a variety of unique areas.

For instance, Plymouth’s new offices incorporate hotel spaces —high-top bar-style tables with seating and connectivity ports at the tables — for staff that don’t need to be at desks all day. “They can plug their computers and everything in, but just belly up to the bar with a laptop, get their work done and then head back out into the field,” Evans says.

Milton’s city hall incorporates hotel spaces that are similar in concept. It also features covered porches that let people easily get outside or even work there, Buscemi says.

“There’s much more flexibility with your work environments on how you feel like you need to work to get a particular task done,” Buscemi says. “Things are much more mobile today.”

A hallmark of many of these work environments is that they foster collaboration and many types of meetings. A traditional office would only allow for collaboration in board rooms or conference rooms.  But “sometimes, there isn’t a need for an hour meeting with 12 individuals. Sometimes, three people just want to huddle in a space that’s semi-private, and we have that,” Nashville ITS Executive Project Manager Pearl Amanfu explains.

Amanfu is referring to multiple group areas around Nashville ITS’s office called “drop-in spaces,” that allow people to meet in much less formal settings. One section in particular has four such spaces in close quarters — one has armchairs with little tables, while another has high-top tables with barstools, Durbin says. To emphasize mobility, most of the furniture in these spaces is movable, Amanfu says.

A room called the community hub functions as a work café, where Milton city staff can work on a laptop, eat lunch or hold small meetings. In contrast, Milton’s innovation area is an all-glass room with couches that’s intended to feel like a residential area where one can relax, create and think outside of the box.

Ample technological features throughout these spaces such as teleconferencing systems and large monitors enhance the ability for collaboration as well. Aesthetic technology, such as a departmentally-zoned white noise generator in Plymouth’s new offices, a scent machine in Nashville ITS’s office and Milton’s individualized lighting and temperature control, also help maintain a comfortable environment for workers, officials say.

Spaciousness also adds to the aesthetics of these new offices, too. The Nashville ITS office features a breezeway with drop-in spaces, while Plymouth lowered certain walls to allow for better lighting, Durbin and Evans say. While Plymouth workers previously had to enter public hallways to get from administrative services to parks and recreation and back, Plymouth’s renovation knocked down walls and private offices so workers could move back and forth behind secured doors.

However, elimination of those offices within the renovated office space proved to be one of Plymouth’s biggest challenges behind the renovation, Evans says. Shifting to these new spaces can be tough, especially with adapting to a new office culture.

“People sometimes feel less valued, but that’s not really what it’s about,” Evans says. “It’s to bring them together with everyone else so they have the opportunity to be more collaborative and, [it’s] more effective use of space… I think our employees understood what we were trying to do.”

For Milton, a major challenge was present in maintaining desirable acoustics, but Buscemi says this would be a challenge for any work area. 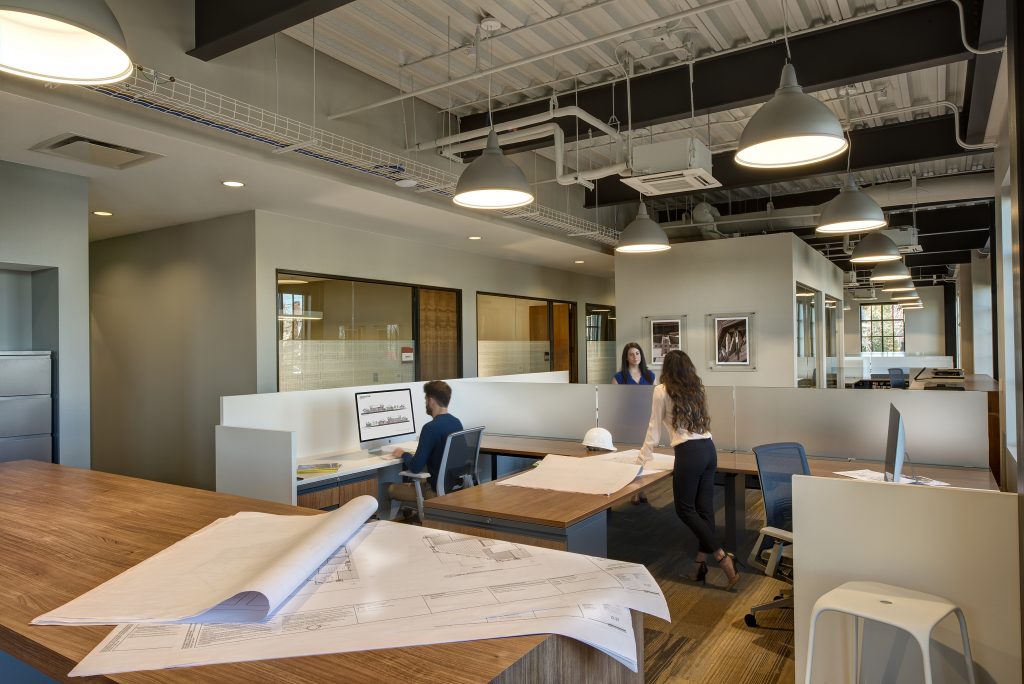 “Culturally with acoustics with an open work environment, staff have to understand that if they have a conversation with somebody else, they really should go to a huddle room and be mindful of the people they’re working around,” Buscemi says.

What surprised him however, was how quickly his staff adapted to their new office digs. Originally, Milton officials expected the cultural change to take several months and require staff training.

However, Milton staff completely embraced the new office within the first two weeks of being there. Milton Communications Manager Shannon Ferguson notes that Milton’s human resource director will now often move from his interior office and go downstairs to work in hotel spaces within the finance department during periods like open enrollment.

“It’s really more of a natural-style work environment, rather than a forced one in my mind, where you’re trying to silo somebody into a specific style of environment,” Buscemi explains.

Plymouth and Nashville employees have felt the changes in office atmosphere, too. Lit now by natural and LED lighting throughout, Evans describes her department’s new office as brighter, lighter, more conducive to collaboration and not always feeling like working in the traditional sense, such that people can be more effective at problem solving. Durbin calls his workplace changes palpable, noting that the office’s collaboration/drop-in spaces are heavily used.

“What we’re finding is that a lot of the leadership at the local government levels are embracing this workplace innovation,” Barsuk says of Gensler’s clients. “They’re asking the hard questions. Obviously, there’s concerns about things like acoustics and privacy. But by providing this variety of spaces like the huddle rooms and giving the employees choice, we’re finding that… they’re going through a change in how they perceive the workplace and how they use the workplace.”