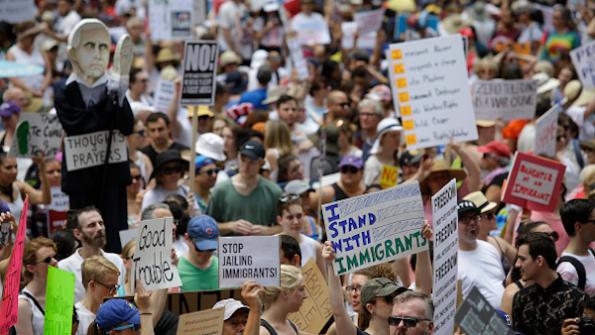 The housing of detained immigrants in county jails for the Trump Administration has become a cash cow for three New Jersey counties. But decisions to renew contracts with Immigration and Customs Enforcement has been met with backlash.

The housing of detained immigrants in county jails for the Trump Administration has become a cash cow for three New Jersey counties. But decisions to renew contracts with Immigration and Customs Enforcement (ICE) has been met with backlash.

Between January 2015 and March 2018, the amount of money that ICE has sent to the New Jersey counties of Bergen, Essex and Hudson has increased 46 percent, WNYC reports. Currently, each county is raking in $6 million per month to hold detained immigrants in their county jails.

Bergen County Sheriff Michael Saudino, a Democrat, justified the county housing the detained immigrants, saying that the detainees would have to go somewhere, according to NorthJersey.com. “If they’re not at my jail, I know they’re going to be somewhere else. I take great pride in knowing they’re in the best possible facility they could be,” he told the news site.

Bergen County Executive Jim Tedesco blasted President Donald Trump’s immigration policies, and he said that the contract should not be seen as an endorsement of Trump’s policies. Instead, he said, detained immigrants would be housed under great circumstances given their conditions, NorthJersey.com reports.

While multiple organizations have criticized the counties’ contracts, one protest in Essex County turned heated as participants demonstrated outside the Essex County administration building, demanding to speak with county executive Joe DiVincenzo, according to NJTV. After refusing officers’ requests to move, officers grabbed and shoved the protesters away, later arresting eight of them.

“All across the country, people are doing exactly what we are doing here and succeeding,” Eric Lerner, with protest group Resist the Deportation Machine, told NJTV. “Local governments, county governments, city governments are saying no to ICE. We are ending these contracts.”

Two weeks later on July 13, members of the same protest group watched as Hudson County freeholders voted 5-2 to renew the county’s contact with ICE to house detained immigrants in their county jail, NJTV reports. The renewed contract will pay Hudson County $120 per day for each immigrant detainee, NJ.com reports.

Officials of several cities responded with outcry. Hoboken, N.J., Mayor Ravi Bhalla tweeted, “This is disgraceful and does not represent the will and values of the people of Hudson County. Mass incarceration is the problem, not the answer!”

Jersey City, N.J., Mayor Steven Fulop called the action a “stain on all of us that live in NJ” on Twitter. “The fact the contract wasn’t publicized w/community input + the contract was approved despite the rhetoric against it do so much to undermine credibility. Sad/disappointing,” he continued.

While counties had signed detainee housing agreements with ICE decades ago, the issue received increased scrutiny as the Trump Administration’s policy of separating families came to light, according to NJTV.

However, cities and counties in California, Oregon and Texas have ended their contracts with ICE in recent weeks, according to NJ.com.

Human Rights First, a nonprofit and nonpartisan immigrant advocacy group, released a report in February 2018 that described immigrants living in “harsh and inhumane” conditions, NJ.com reports. The report’s data was gathered from tours of correctional facilities in the New Jersey counties of Elizabeth, Essex and Hudson, as well as interviews with over 100 immigrant detainees.

Conditions include the presence of maggots, undrinkable tap water, a lack of basic medical care and detainees being held for up to 18 months without a decision on their cases, according to NJ.com.