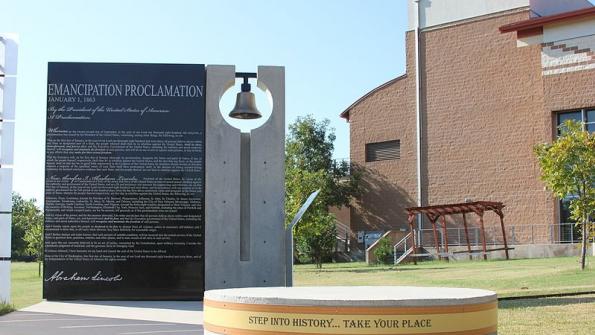 Many cities across the country have held or are holding formal celebrations to mark the day known as Juneteenth.

Juneteenth, celebrated on June 19 each year, commemorates the announcement of slavery’s abolition in Texas on June 19, 1865, according to the National Juneteenth Observance Foundation (NJOF). Texas was the final rebel state to allow slavery during the civil war, ending the practice nearly two and a half years after President Abraham Lincoln signed the Emancipation Proclamation.

Many cities across the country have held or are holding formal celebrations to mark the day known as Juneteenth.

Juneteenth, celebrated on June 19 each year, commemorates the announcement of slavery’s abolition in Texas on June 19, 1865, according to the National Juneteenth Observance Foundation (NJOF). Texas was the final Confederate state to allow slavery during the civil war, ending the practice nearly two and a half years after President Abraham Lincoln signed the Emancipation Proclamation.

Currently, 45 states and the District of Columbia recognize Juneteenth as a state holiday, according to a 2017 NJOF news release.

"America needs healing from the legacy of enslavement," Rev. Ronald Myers, founder and chairman of the NJOF, said in the 2017 news release "The week of the celebration of Juneteenth, affords the nation the best opportunity to constructively confront one of the darkest periods in American history."

States and cities celebrate the holiday differently, and many celebrated the holiday the weekend before the official day occurred on Tuesday.

Pine Bluff, Ark., celebrated the holiday on Saturday in a park with gospel music and praise dance performances, poetry recitations and catered barbecue, according to the Pine Bluff Commercial.

“This has been absolutely awesome,” Pine Bluff Mayor Shirley Washington said, per the Commercial. “And it could not have been for all of you. We are so thankful that you came to share this event with us, and it will become an annual occasion.”

Fort Worth, Texas, held a weekend-long celebration of the holiday, complete with a parade, a footrace, a basketball tournament, a barbecue cook-off and an outdoor dance program, according to a Fort Worth News Release. More black community-centric events were held as well, such as the screening of a film about plantation slaves and a historical Juneteenth exhibit at one of the city’s libraries.

Other cities have opted to celebrate more solemnly. On Tuesday, Charleston, S.C., officials will consider a two-page resolution to apologize for its role in fostering the slave trade, according to The Post and Courier.

The city’s port was a major entry point for African slaves from colonial times through 1808, The Post and Courier reports. Charleston also regulated slavery through issuing “slave tags” for slaves hired out for work around the city. The 1860 census shows that slaves outnumbered free men and women in the city at the time.

Multiple cities such as Macon, Ga., Annapolis, Md., and New Orleans have apologized for their roles in the slave trade, The Post and Courier reports. Charleston’s apology would also be issued around the third anniversary of the Emanuel AME Church massacre that white supremacist Dylann Roof carried out in 2015.

"This is a historical moment for our city, our city that was a seat for the Confederacy," Charleston Council Member William Dudley Gregorie, who is also promoting the resolution, told The Post and Courier. "Our city is denouncing and apologizing for its role in the torture of enslaved people."