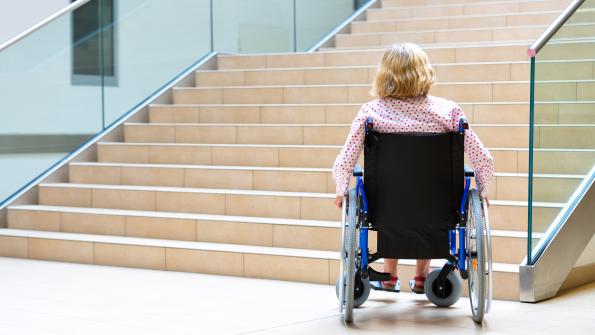 As midterm elections approach, the U.S. Department of Justice is enforcing improved polling place accessibility in jurisdictions across the country.

On Nov. 6, American citizens nationwide will flock to their local polling places to vote in the U.S. midterm elections. However, many citizens will encounter obstacles in doing so. Some may even leave those places without being able to exercise their voting rights.

Although the Americans with Disabilities Act (ADA) was passed 28 years ago, citizens with disabilities still face many hurdles to voting in-person. During the 2016 general election, 60 percent of a sample of 178 polling places were found to have at least one feature that could impede people with disabilities from voting, a U.S. Government Accountability Office (GAO) study shows. That’s an improvement from the findings of past GAO studies during the 2000 and 2008 elections, too.

“I don’t think there’s a deliberate campaign to deny people with disabilities access to voting,” says Lisa Schur, a professor at the Rutgers University School of Management and Labor Relations who specializes in disability research. “I think that [the reason is] ignorance, negligence, it’s not on the radar.”

An ongoing U.S. Department of Justice (DOJ) initiative is helping to enforce better polling place accessibility across the country. Launched in 2015, the ADA Voting Initiative is carried out in collaboration with U.S. Attorney’s Offices nationwide to guarantee that people with disabilities have an equal opportunity to vote as those without disabilities do.

“We’re working collaboratively with the counties,” says Michael Butler, an assistant U.S. attorney and the civil rights coordinator for the U.S. Attorney’s Office for the Middle District of Pennsylvania. “When I first go to the county to tell them about it, I tell them that, ‘we’re not here to ‘get you,’ we’re not here to make your lives miserable. We’re just here to help those with disabilities and help you come into compliance.’”

Butler’s office has settled with three Pennsylvania counties over the past two years. Investigated jurisdictions are chosen at U.S. Attorneys Offices’ discretion; Butler chose the three counties after viewing a documentary that identified them as having accessibility issues for voters with disabilities.

Luzerne County, Pa., is among the three that were investigated. During the Nov. 3, 2015 general election, the U.S. Attorney’s Office surveyed 52 of the county’s 180 and found many to have accessibility barriers for those with disabilities, DOJ documents show.

Butler subsequently met with county officials to present the survey’s findings and detail the settlement agreement into which his office wanted the county to enter, according to Mike Butera, a private attorney who works part-time as an assistant county attorney for Luzerne County. Butera recalls few complaints about polling place accessibility over the preceding several years and says that the county rectified the issues upon receiving complaints.

“I’ve been an assistant county attorney for [many] years, and it was never the intention of Luzerne County to ever not be ADA compliant with any polling place. We’ve always tried to be compliant,” he says. “We naturally told [Butler’s office] that we would cooperate 100 percent.”

The settlement was made effective on Jan. 12, 2017. Under its terms, Luzerne County was to survey the rest of its polling places using current ADA guidelines and rectify any accessibility problems found in their survey as well as the DOJ’s survey. The county completed the survey by September 2017 with the help of a private company called Inclusion Solutions.

Polling places’ accessibility-related issues can be as varied as the counties and cities that administer them. But in Butler’s surveying experience, many polling place issues tend to occur outside the voting areas themselves.

Some common external polling place accessibility issues include parking, ramps and signage, a DOJ document notes. The polling places of Luzerne County and Richland County, S.C. — which entered into a similar settlement as part of the ADA Voting Initiative in May 2017 — shared these issues.

Richland County also created temporary spaces to designate curbside voting, or voting outside the polling place that can also take place in cars. Curbside voting’s usage differs across locales — it’s popular in Richland County, but scarcely used in Luzerne County. DOJ documents state that curbside voting can’t replace in-person voting under the ADA, but it should be provided when a precinct’s only polling place would be inaccessible to all voters.

In a few instances, neither county could physically modify buildings in which certain polling places were housed, so officials had to relocate the polling places to other buildings.

Both Suleman and Butera agree that finding new polling places can be laborious. The issue proves especially difficult in minute municipalities. Butera predicts that Luzerne County may have to pour money into outfitting a small borough’s garage to align it with federal accessibility standards due to the lack of even near-ADA-compliant buildings there.

For Luzerne County, relocating polling places is proving to be an ongoing process, especially in preparation for their May 15 general election. In two municipalities, county officials consolidated two wards’ polling places into one building in April alone, county records show.

Both counties have changed their polling place worker trainings to reflect the new practices and modifications they’ve implemented. The two added a new component to workers’ training that focuses on ADA awareness, while targeting training at modified polling places to ensure that poll workers understand their roles there, according to Butera and Suleman.

“Part of the problem is just the way the system has been set up as so fragmented,” she says. “And I think having more communication and more collaboration would be really valuable.”

Why is voter turnout lower among people with disabilities?

Voting by mail can offer more accessibility solutions for people with disabilities. However, a 2012 national survey by Rutgers University reports that 58 percent of respondents with disabilities said they would prefer to vote in-person in the next election.  What’s more, the turnout gap exists for mail-in voters as well.

In research from 2013, Schur suggests multiple potential reasons for this discrepancy. People with disabilities can be more socially isolated and tend to have less education and income than people without disabilities, which are all linked to lower voter turnout.

“Having an inaccessible polling place, not being able to participate like every other citizen, certainly sends a message that ‘we don’t really care whether you are part of the system or not,’” Schur says.

A DOJ news release shows that as of May 7, 2018, the DOJ has surveyed over 1,500 polling places across the U.S. and has increased polling place accessibility in over 35 jurisdictions as part of the ADA Voting Initiative.