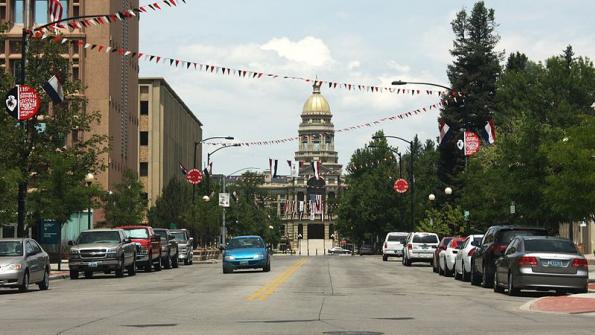 Wyoming municipalities could soon get far more funding options than they currently have.

Wyoming municipalities could soon get far more funding options than they currently have.

Wyoming doesn’t give cities or counties independent taxing authority, the Casper Star-Tribune reports. Because of this, communities are reliant on state appropriations to supplement revenue from local sales and property taxes.

The Wyoming Association of Municipalities released two reports that found that cities in the Cowboy State are more dependent on state aid than the municipalities of any other state in the country, according to the AP.

“When times are very, very good, and Wyoming has had some great years, then that works well,” Rick Kaysen, the executive director of the Wyoming Association of Municipalities, told the Gilette News Record. “But when there are troublesome years, when the economy has a downturn, we understand the state can’t print money, then municipal governments’ hands are somewhat tied.”

In the 2018 budget season, the state legislature authorized the Wyoming government to give $105 million in direct distributions to local governments over the next two years, according to the News Record. In recent years however, revenues from mineral extractions has decreased, making the state spend more than it’s taken in from taxes on energy production, according to the AP.

“It’s very difficult to do long-term planning when there’s uncertainty on whether the dollars will be there or not,” Kaysen told the Star-Tribune.

Direct distribution funds in Wyoming are often used for one-time infrastructure payments, the News Record reports. Because the state legislature must approve the funds, they can’t be used for ongoing expenses.

The issue was considered during the 2017 general legislative session but was declined, according to the News Record. Rep. Mark Kinner, R-Sheridan, who serves on the Joint Revenue Committee, hopes that local voters would be able to implement local tax options if the state does allow municipalities to create their own taxes.

“The downside would be, if there is a downside, that local people may end up having to pay more,” Kinner told the News Record. “The question becomes, do local taxpayers want to help fund the city and county governments?”

The Joint Revenue Committee is set to meet on June 4 and 5, the News Record reports.