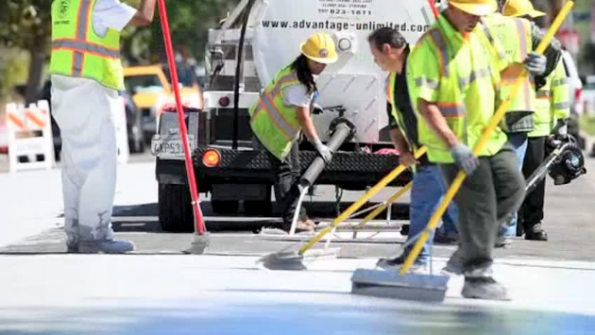 In an effort to cool the city, Los Angeles is experimenting with painting some of its streets white.

In an effort to cool the city, Los Angeles is experimenting with painting some of its streets white.

Dark asphalt absorbs between 80 percent and 95 percent of the sun’s rays, which means streets in LA can reach 150 degrees on summer days, Business Insider reports. The white coated streets, however, reflect a great deal of light and keep the streets approximately 10 to 15 degrees cooler.

The white coating, made by a company called GuardTop, is sprayed on the roads by a truck. Teams of city workers use squeegees to evenly distribute the coating across the road’s surface, according to Business Insider. While the coatings are made to last seven years, they are still quite expensive, costing about $40,000 per mile.

Ultimately, the white roads will cut temperatures on the roads, cooling nearby buildings, reduce air pollution and reduce the risk of deaths associated with increasingly severe heat waves, according to the Los Angeles Daily News.

“The city’s going to get hotter because of climate change, particularly this neighborhood of the west San Fernando Valley,” said Greg Spotts, assistant director of the Bureau of Street Services, who doubles as its acting chief sustainability officer. “The phenomenon called the heat island effect means the city is hotter than the surrounding countryside We’re exploring ways to reduce the heat island effect by reducing the absorption of heat in the built environment.”

Average temperatures in Los Angeles have risen 5 degrees in the past 100 years on account of the heat island effect caused by miles of asphalt freeways, roads, parking lots, roofs and more, according to manufacturer materials. During summers, temperatures have risen an average 10 degrees.

Additionally, heat waves approaching 100 degrees have risen from two a year in 1906 to 24, while their duration has increased from a few days in a row to heat waves of two weeks, climatologist Bill Patzert of the Jet Propulsion Laboratory said in a statement.

“I’m all for it,” Patzert said about the cooler pavement. “We could certainly stop the rise — and perhaps reverse it.”