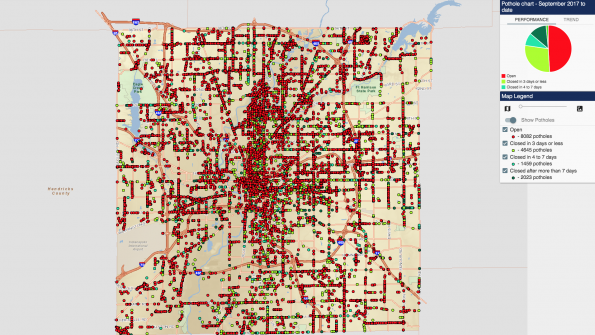 Indianapolis declares state of emergency to deal with potholes

Indianapolis’ roads are in such dire condition that the city’s mayor issued an emergency declaration on Feb. 23 to jumpstart heavy street maintenance.

Indianapolis’ roads are in such dire condition that the city’s mayor issued an emergency declaration on Feb. 23 to jumpstart heavy street maintenance.

“The Emergency Declaration will allow [Indianapolis Department of Public Works] to go beyond normal operational strength, by putting multiple contractors to work strip patching areas that are crumbling from years of repair and re-repair,” Hogsett said in a tweet.

The problem has been brewing for decades, Hogsett says, but noted major fluctuations in temperatures have exacerbated the problem, through freeze and thaw cycles according to IndyStar. His plan calls for $100 million to be devoted to fixing roads in 2018, according to Indianapolis TV station FOX 59.

“With what some are calling the most drastic temperature swings we have seen in 25 years, Indianapolis’ roads are littered with potholes and crumbling pavement,” Hogsett says, per Nuvo. “The damage to our roads this year is frustrating for residents, and I share their frustration.

Hogsett’s $13 million request, plus an additional request of $1 million that’s already been devoted to the Indianapolis Department of Public Works (DPW) would also fund long-term road repairs that could prevent potholes forming in the future, according to IndyStar. One such strategy is called “strip-patching,” which would remove about nine inches of pavement on a given stretch of road and refill it. The $14 million request would fund 50 miles of strip patching.

The $14 million request would be earmarked in addition to the city’s $88 million budget for road funding in 2018, according to the IBJ.

In January, the Indianapolis DPW spent about $150,000 over three days to repair potholes, IndyStar reports. However, citizens have reported that potholes patched in January have since re-opened, according to FOX 59.

However, DPW Director Dan Parker stands behind his crews’ work. "We follow best practices and … the asphalt is made to [Indiana Department of Transportation] specifications," he told FOX 59. "We’ve essentially had four or five spring thaws already and it’s still February. So usually this problem occurs in March but for this year, we’re dealing with it in January and February and we’re seeing it in the number of chuckholes reported.”

On Indianapolis’ pothole tracking map, 8,082 potholes are currently listed as being open.