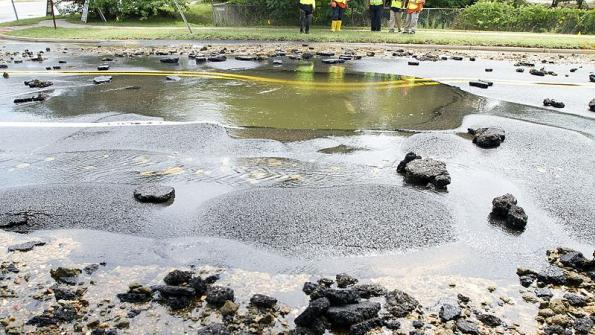 As the new year continues to settle in, Jackson, Miss., officials are scrambling to deal with a major water crisis brought about by cold weather.

As winter continues to settle in, Jackson, Miss., officials are scrambling to deal with a major water crisis brought about by cold weather.

Jackson officials confirmed that 108 water main breaks had occurred between between New Years Day and Jan. 7 on distribution lines, according to Jackson TV station WAPT. On Jan. 7, 13 new breaks were confirmed.

The breaks occurred as freezing temperatures occurred in the city between Jan. 1 and Jan. 6, per WAPT. The breaks led to a lowering in water pressure in many areas of the city, according to MSNewsNow. Moreover, a boil-water advisory that was implemented on Jan. 4 has been extended into this week, WAPT reports.

In addition to many businesses being affected, the water issues have affected public buildings, as Jackson Public Schools and several city buildings closed, according to Jackson TV station WJTV.

City officials declared a state of emergency on Jan. 2, which Jackson Mayor Chokwe Antar Lumumba said would help the city “get all the necessary assistance to respond to the issues,” the Clarion Ledger reports.

Officials are rectifying the situation by distributing bottled water and unportable water for toilets, according to MSNewsNow. Additionally, the city is enlisting external contracting crews to repair the main breaks.

The crews are making progress on the repairs. As of Jan. 8, 62 of the water breaks had either been repaired or were in the process of being repaired, according to WAPT.

Lumumba blamed the water emergency on billions of dollars worth of infrastructure issues in the city, the Clarion Ledger reports.

"I think that we continue to deal with crumbling infrastructure, a $2.5 billion infrastructure issue, and this represents those type of issues," Lumumba said, per the Clarion Ledger. "As we are seeking methods and funding to repair it, we're trying to be as swift to respond as possible."

Jackson’s troubles come as a large cold snap smothered most of the country in early January, ABC News reports. Officials in other parts of Mississippi, as well as Louisiana and Alabama, have opened warming shelters in response.