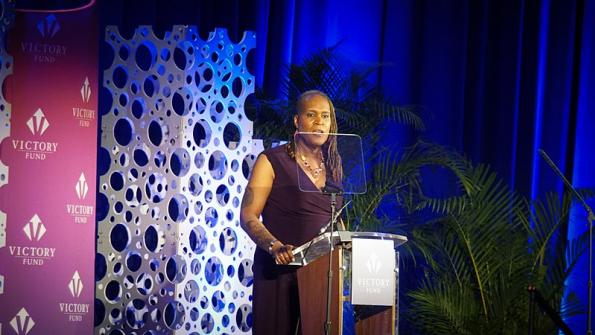 Election Day 2017 proved to be a watershed moment for the transgender community as several trans lawmakers were elected across the country.

Election Day 2017 proved to be a watershed moment for the transgender community as several trans lawmakers were elected across the country.

Andrea Jenkins became the first openly transgender black woman to be elected to public office in the U.S. on Tuesday, Nov. 8, the Washington Post reports. Jenkins, who won 73 percent of the vote in Minneapolis’ Eighth Ward, is an activist, historian and poet that has spent 12 years working for two different Minneapolis council members.

“As an African-American trans-identified woman, I know firsthand the feeling of being marginalized, left out, thrown under the bus,” Jenkins said in her acceptance speech, Minneapolis TV station KMSP-TV reports. “Those days are over. We don’t just want a seat at the table, we want to set the table.”

After an instant runoff, Phillipe Cunningham, a transgender black man, unseated the council president by a slim margin to represent Minneapolis’ Fourth Ward, Twin Cities Pioneer Press reports. Cunningham had worked in the mayor’s office and faced an opponent who had served on the city council for 20 years, the Minneapolis Star Tribune reports.

"When I found out, it was just this feeling of overwhelming gratitude that folks in my community were willing to take a chance on me," Cunningham told the Star-Tribune.

Neither Jenkins nor Cunningham focused on gender identity during their campaigns, the Pioneer Press reports. However, trans activists are praising the victories as being inspirational for the trans community.

"[Jenkins'] win will surely inspire other trans people to run for office and further inclusion in their communities,” Aisha Moodie-Mills, president of LGBT candidate advocacy group Victory Fund, said in a statement, per the Pioneer Press

The same night, Danica Roem became the first transgender state legislator, winning a spot in the Virginia House of Delegates, the Post reports. In the process, she defeated a 13-term delegate, Bob Marshall, who called himself the state’s “chief homophobe” and refused to use Roem’s preferred pronouns or publicly debate her.

"Discrimination is a disqualifier," Roem said that night, per the Post. "This is about the people of the 13th District disregarding fear tactics, disregarding phobias . . . where we celebrate you because of who you are, not despite it."