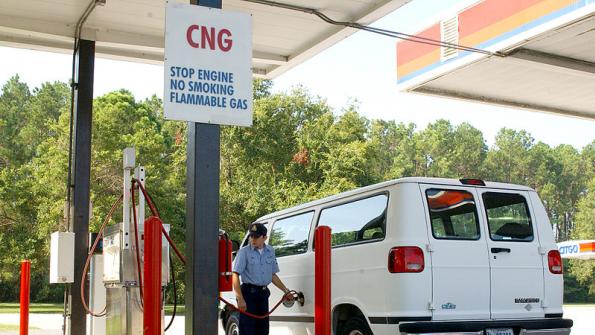 Compressed natural gas-fueled vehicles on the rise in city fleets

Cities and their transportation partners are rolling out CNG-fueled buses and other vehicles in their fleets.

As American City & County previously reported, compressed natural gas (CNG) is a popular fuel choice for refuse vehicles. But cities and their transportation partners are also finding success with CNG fuel in other vehicles in their fleets.

Valley Metro, the unified regional transit system for the greater Phoenix area, will be deploying 200 new buses over the next few years, according to Phoenix radio station KTAR. In addition to using CNG, the buses will also have new electronic fan systems and new transmissions, which officials report will yield better engine performance.

“We are moving all of our buses over to CNG,” Valley Metro Spokeswoman Corinne Holliday told KTAR. “One of those things we really try to do it improve the environment and one way we can do that is by having CNG buses.”

Grand Rapids, Mich., has introduced a plan with the Interurban Transit Partnership (known commonly as The Rapid) to roll out a fleet of buses using CNG as fuel, according to Grand Rapids TV station WZZM. The fleet will be the largest environmentally friendly one in Michigan, and The Rapid’s 150-vehicle fleet will contain 92 CNG buses by 2021.

Lawton currently has three gasoline bi-fuel and CNG pickup trucks and three CNG refuse trucks, and the city aims to have an entire fleet of sanitation trucks in place by 2021.

“CNG was a viable, clean energy resource that we like for three reasons: It was environmentally friendly, we had an abundant supply of it here in the state, and we could help the country reduce our dependency on foreign oils,” Dennis Bothell, equipment maintenance superintendent for Lawton, told NGT News.