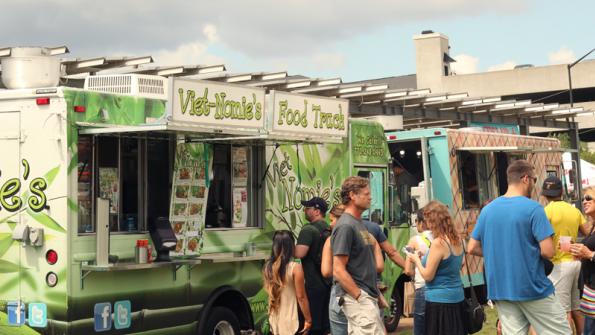 Cities crack down on food trucks

Cities across the country are passing regulations on a summer staple — food trucks. The regulations differ widely in breadth.

Cities across the country are passing regulations on a summer staple — food trucks. The regulations differ widely in breadth.

New regulations in Aiken, S.C., mandate that food trucks can only operate on private property if they have the owner’s permission and the property has zoning that allows eating establishments, according to the Aiken Standard. The ordinance also establishes operating hours, buffers from restaurants, prohibitions from operating in certain areas and the allowance of ice cream trucks to operate in the city.

Special events in the city would have their own rules. "There are ways that as a part of a special event, a mobile food vendor could obtain a one-time permit for a limited time," City Planning Director Ryan Bland said at the meeting in which the ordinance was passed, per the Standard.

In contrast, Amherst, Ohio, in July issued a moratorium on food trucks operating on “any street or public property in the city within 15 feet of a building, permanent structure or parked vehicle,” according to The Chronicle-Telegram. The decision came about after residents complained about the Smash Food Truck operating in front of a restaurant called The Pour House.

The moratorium will expire either by Dec. 31 or by the time the Amherst City Council devises a more permanent food truck ordinance.

Jenso Soto, operator of Smash Food Truck, admitted that regulation was important and that he and other truck operators would comply as much as possible with the regulations. “Overall, the experience of a food truck should be to the benefit of the town. I know downtown Amherst was always a draw for people to come down because of the variety,” he told The Chronicle-Telegram.

The law has been in place since 2014, according to Blatimore TV station WMAR. Food truck owners could be fined $500 and have their vendor licenses revoked if they violate the rule. A judge was expected to make an imminent ruling on the case as of Jul. 26.

"We are confident that we will prevail in our lawsuit challenging the city's unconstitutional 300-foot ban," Institute for Justice attorney Greg Reed said in a statement, per WMAR. "A victory for [food truck plaintiffs] Pizza Di Joey and MindGrub will be victory not just for Baltimore's food trucks, but for all Baltimoreans because customers not the government should decide where to buy their lunch."