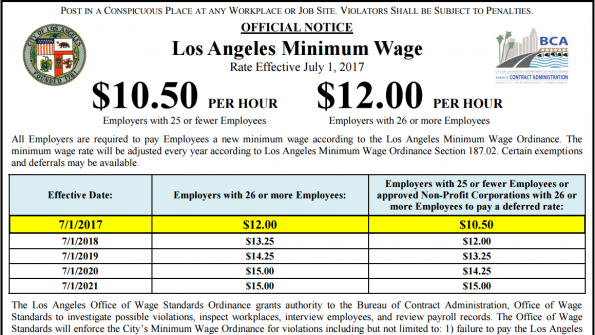 Across the country, cities are raising the minimum wage for both their own workers as well as their entire population. However, studies of Seattle’s minimum wage hike have painted a disparate picture of its effects, showing positive, neutral and negative effects of the increase.

Across the country, cities are raising the minimum wage for both their own workers as well as their entire population. However, studies of Seattle’s minimum wage hike have painted a disparate picture of its effects, showing positive, neutral and negative effects of the increase.

On June 21, the Atlanta City Council approved its $648.6 million fiscal 2018 budget, which gives all employees making under $150,000 a 3 percent pay raise, the Atlanta Journal-Constitution reports. That increases city employees’ minimum pay to $13 an hour, which will increase to $15 an hour over the next two fiscal years. The budget also increases firefighters’ starting salaries.

“With this action, we are demonstrating that the city of Atlanta offers competitive employment at all levels, and respects the dignity of all workers,” Atlanta Mayor Kasim Reed said in a statement, per the Atlanta Journal-Constitution. “I am also pleased to raise the starting salary for our firefighters, who set the standard for professional fire departments in our state.”

Cleveland Mayor Frank Jackson has also followed suit, raising all of his city’s full-time, part-time, union and non-union employees’ minimum wage to a $15 hourly rate, according to Cleveland.com. The city will have to negotiate labor agreements with 34 unions throughout the city, and Jackson hopes to enact the new wages by next April.

"This is our attempt to be in line with what we believe in," Jackson told Cleveland.com. He added, “there's been more and more tax relief on the affluent and more and more tax burdens on the poor, particularly the working poor.”

"Why does it matter?" Los Angeles Mayor Eric Garcetti said in a news release, per NBC Los Angeles. "Because an honest day's work deserves an honest day's pay. Because hardworking families should get a fair shake. Because raising the wage helps to build a stronger middle class in Los Angeles, which is good for everyone."

But studies of a Seattle minimum wage law passed in 2014 have painted different pictures of the measure’s effects on Seattle jobs and employment. The law raises Seattle’s minimum wage until it reaches $15 by 2021, according to the Times.

A University of Washington (UW) study showed that Seattle’s second wage increase to $13 reduced low-wage job hours by 9 percent, as hourly wages increased about 3 percent. Total payroll fell for these jobs, which the study says implied that the ordinance lowered those employees’ earnings by an average of $125 per month in 2016.

However, a study from the University of California at Berkeley’s Institute for Research on Labor and Employment that focused on Seattle food service jobs had different findings, The New York Times reports. The Berkeley study found that for every 10 percent the minimum wage rose, industry wages rose about 1 percent.

Neither study has been peer reviewed yet, The New York Times reports.