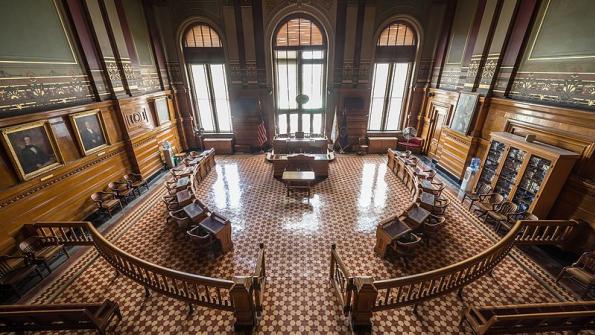 Providence, R.I.’s city council president has resigned after being charged with two felonies. He had previously refused to step down despite council members’ calls to do so.

Providence, R.I.’s city council president has resigned after being charged with two felonies. He had previously refused to step down despite council members’ calls to do so.

Providence City Council President Luis Aponte was charged with embezzlement and misusing campaign funds, the Associated Press reports. While Providence councilors and Mayor Jorge Elorza had called for his resignation, Aponte refused and declared his intent to fight the charges.

Elorza began working with local agencies including the Providence Law Department and the city solicitor’s office to determine if the city’s charter and parliamentary rules contained any legal ability to strip Aponte of his powers, Rhode Island NPR (RINPR) reports.

On May 15, the council passed a 12-1 vote of no confidence in Aponte, the Providence Journal reports. Aponte cast the lone dissenting vote and later said he had no intention of stepping down, Providence TV station WJAR reports.

“I think the right thing to do, I think the honorable thing to do and I think, frankly, what any other person on the city council or the mayor’s office would have done, is simply step down and save us all the agony,” Elorza had told RINPR.

On the morning of May 19, the council decided to hold a special meeting the following Monday to remove Aponte from office, the Journal reports. By that afternoon, Aponte announced his resignation as city council president but intended to stay on the council as a councilman, WJAR reports.

“After much deliberation, I have determined that it is in the best interest of my constituents, colleagues, and city to formally submit my resignation as Providence City Council President,” Aponte said in a statement, per WJAR. “Serving the people of Providence is one of the greatest honors of my lifetime, and I remain committed to representing my constituents in my capacity as Councilman. While it has been a privilege to serve my colleagues as Council President, I believe this is the appropriate time to step down from my leadership position and focus on the best opportunities to serve the needs of my community.”

Aponte’s charges came just a week after a former councilman, Kevin Jackson, was recalled from the council by a strong majority after also being charged with embezzlement and misuse of campaign funds, WJAR reports.

"I think it puts a total black eye on all of us,” Providence Councilman Nicholas Narducci told WJAR. “I think at this point in time what we need to do as a city council is stick together and make sure the right things are done.”