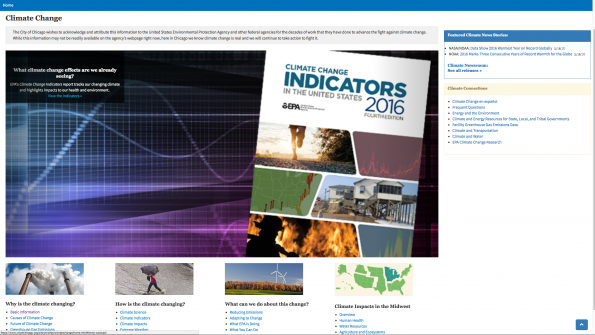 A new Chicago government website has posted climate change information and data that the Trump Administration had removed from the Environmental Protection Agency’s website.

“The City of Chicago wishes to acknowledge and attribute this information to the United States Environmental Protection Agency and other federal agencies for the decades of work that they have done to advance the fight against climate change,” reads the introductory paragraph of the new website, which launched on May 7, per a Chicago news release.

Chicago’s “Climate Change is Real” website, viewable here, contains content retrieved from the archived EPA page, according to Politico. While the EPA had promoted climate change data over the past 20 years through Republican and Democrat administrations, President Trump’s administration removed the EPA’s climate change website around April 28.

“The Trump administration can attempt to erase decades of work from scientists and federal employees on the reality of climate change, but burying your head in the sand doesn’t erase the problem,” Chicago Rahm Emanuel said in the city news release, per Chicago TV station WLS-TV.

Emanuel has called on other mayors to take similar actions, WLS-TV reports.

An EPA news release from April 28 announced updates to the agency’s website that “reflect the agency’s new direction under President Donald Trump and Administrator Scott Pruitt.”

“We want to eliminate confusion by removing outdated language first and making room to discuss how we’re protecting the environment and human health by partnering with states and working within the law,” EPA Associate Administrator for Public Affairs J.P. Freire said in the EPA news release.

The Trump Administration has not publicly commented on Chicago’s actions yet. However, National Resources Defense Council (NRDC) Director of the Midwest Program Henry Henderson expressed support of the action in a blog post on the NRDC website.

“As a seeming war on science moves forward in D.C., Chicago ensures that decades of essential data can continue to inform the researchers seeking to understand and find solutions to climate change,” Henderson wrote.

On the same day that Chicago’s “Climate Change is Real” website was launched, the Chicago Department of Innovation and Technology initiated a public test for a tool that lets users preserve and archive open data from public data portals, WLS-TV reports. The city’s announcement page for the tool, called RSocrata, links to to a page by the Sunlight Foundation that tracks U.S. government data that the Trump Administration has removed.

The city’s announcement concerning RSocrata states that the new feature was released to coincide with “recent concerns about the removal of government data from public websites and data portals, particularly related to climate change.”