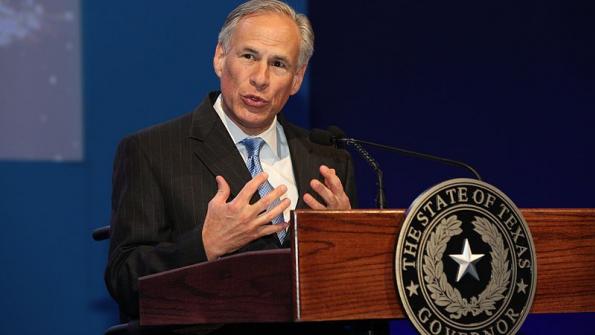 Abbott signed the law on Facebook Live Sunday night, according to CNN. The law creates civil and criminal penalties for government and law enforcement entities that do not comply with federal immigration laws. Entities can be fined up to $25,500 for each day of legal violation.

The law also gives police the ability to ask about a person’s immigration status, the Associated Press reports.

"As Governor, my top priority is public safety, and this bill furthers that objective by keeping dangerous criminals off our streets," Abbott said in a press release, per CNN. "It's inexcusable to release individuals from jail that have been charged with heinous crimes like sexual assault against minors, domestic violence and robbery.

Texas police chiefs in Arlington, Austin, Dallas, Fort Worth, Houston and San Antonio have opposed the bill, the Houston Chronicle reports. Other peace officers and law enforcement agencies had more of a mixed reaction to the bill.

"The challenge, as we told the members of the Legislature, is the perception this is going to create," Houston Police Chief Art Acevedo told the Chronicle. "That's the biggest problem with this bill. It's not a public safety bill."

Other law enforcement officers have said the bill won’t change daily operations and actions as much as criticism suggests, the Chronicle reports.

"I can't see it making a substantial difference to anything we're doing," Montgomery County Sheriff Capt. Bryan Carlisle told the Chronicle. "We try to run a very ethical agency. It's always concerning if you've got legislation from on high dictating how you handle enforcement matters. But without seeing what it looks like … (and) when and if this becomes a reality, you really don't know."

Opponents have compared the Texas law, SB 4, to Arizona’s controversial SB 1070 (also known as the “Show Me Your Papers” law) that passed in 2010, the Kansas City Star reports. The law, which required officers to determine an individual’s immigration status during routine stops, had many of its provisions revoked when it went before the Supreme Court.

The new Texas law is slated to go into effect in September, KUT reports. But just as the Arizona law was challenged soon after it passed, so too do some believe the Texas law will get challenged once it is passed.

“It is almost a certainty that this, SB 4, is going to be challenged immediately as soon as it goes into effect in September,” Jackie Watson, an immigration lawyer with Walker Gates Vela, PLLC, told KUT. “Of that I have no doubt.”