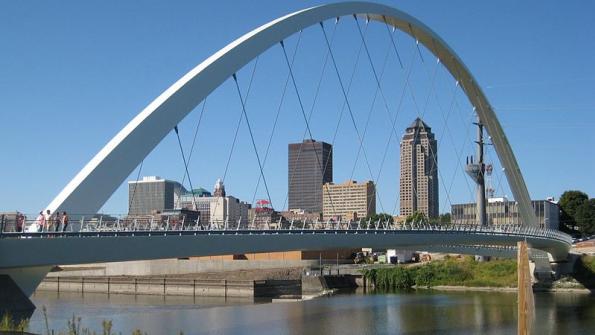 New data from the U.S. Census Bureau shows that the Iowa capital’s metro is the fastest growing city in the Midwest, which continues a growth trend for the area.

New data from the U.S. Census Bureau shows that the Iowa capital’s metro is the fastest growing city in the Midwest, which continues a growth trend for the area.

"This growth reinforces the momentum we are experiencing as a region," Jay Byers, CEO of chamber of commerce collective Greater Des Moines Partnership, said in a March news release. "Our community has consistently been recognized as a top place to live and work, and together we will continue to push forward with our talent attraction and retention efforts to spur further economic growth."

The growth can be attributed to several factors. Business costs in Des Moines are 18 percent lower than the national average, and the city has outpaced the nation in economic growth by 68 percent since 2010, according to Forbes Magazine. The magazine also ranked Des Moines as the 6th best place for business and careers in the country in 2016.

The Des Moines metro is a major insurance industry hub — the area holds 81 insurance company headquarters and 16 percent of the region’s jobs are in insurance, according to the Greater Des Moines Partnership. Financial services companies like The Principal Financial Group (headquartered in the area) and Wells Fargo are also major employers. Additionally, the Des Moines metro’s per capita personal income is nearly $3,000 higher than the nation’s.

Des Moines’ metro area growth continues a trend that’s been in place for over a decade, according to the news release. The Des Moines metro’s population has increased by almost 32 percent since 2000, with an 11 percent increase since 2010.

"That continued population growth is further evidence that we have some very exciting momentum on the economic development front," Byers told the Des Moines Register.

A 2016 report from the American City Business Journals predicted that about 935,000 will reside in the greater Des Moines area by 2040 based on popularity trends via census data, according to the Register. The U.S. Census Bureau also cited Des Moines suburb Ankeny as the third fastest-growing city in the U.S. in 2016, with a 6.5 percent increase in population.

Ankeny was the only Midwestern city within the Census Bureau’s 15 fastest growing cities list, and its high ranking surprised even its mayor.

"Obviously we’re growing, but I had no idea it would rank us third in the nation," Ankeny Mayor Gary Lorenz told the Register at the time. "It’s a tribute just to the fact that the city and the school district have both created an atmosphere that people want to participate and live in."

The other fastest growing Midwest metros from the Census data were Fargo, N.D. at 1.9 percent; Sioux Falls, S.D. at 1.5 percent and a three-way tie between Madison, Wis., Lincoln, Neb. and Lawrence, Kan.— all at 1.3 percent, the Register reports.