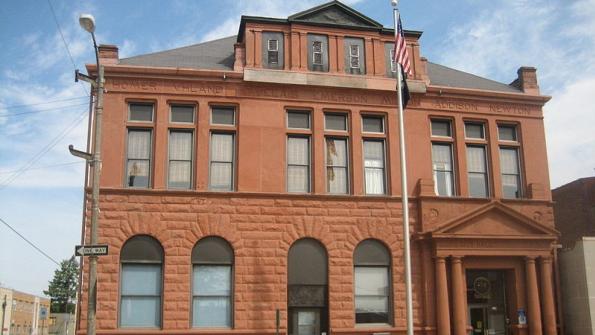 Sometimes, city governments outgrow their city halls. Once that happens, they assume different strategies for selecting their next locations.

Sometimes, city governments outgrow their city halls. Once that happens, they assume different strategies for selecting their next locations.

Some, like Freeport, Ill., renovate an existing building — in this case, the city’s former Carnegie Library building, according to The Journal-Standard. Renovations had begun in July 2016, with city employees beginning to move in in February.

The previous city hall building had a damaged foundation and other inadequacies, and when city officials learned that renovations to the former building would have cost more than renovating the library, it decided to move, The Journal-Standard reports.

"We have repurposed a building with a great deal of history and heritage and created something quite spectacular on a bargain-basement budget," Freeport Mayor Jim Gitz told The Journal-Standard. "We did not go fancy in this building."

The $2.3 million renovation was completed at about $800,000 under budget, The Journal-Standard reports. While the city will pay its $2.5 million loan back over 10 years, the lack of need to pay rent on the former building will allow no impact to occur on the city budget.

"If you can't be proud of this building, something's wrong," City Alderman Art Ross told The Journal-Standard. "We speak a lot about moving Freeport forward, but once you come into this building, you're going to see that Freeport is moving forward."

Other municipalities, like Shakopee, Minn., have opted to build new buildings. The new Shakopee city hall project, slated to be complete by July 4, costs about $8.5 million, according to the Shakopee Valley News. The city is funding the new building by using city several funding reserves.

The new city hall will host the city’s engineering department, use an electronic permitting system and allow for better security, the Valley News reports. City officials’ goal is to create a streamlined customer service and departmental workflow experience for residents.

“The big goal with the new city hall is that it’s a one-stop shop,” Shakopee Assistant City Manager Nate Burkett told the Valley News. “You go to one place and we take care of everything internally instead of sending you running around. The full layout of the building is designed for easy access for the customer.”

Bessemer, Ala. is assuming the same strategy with its new city hall building, Birmingham, Ala. TV station WBRC reports. The three-story building has more modern amenities and will include the city clerk’s office on one floor, council chambers on the second and the mayor’s office on the third floor

The new city hall, which has been under construction since 2010, costs about $6 million, according to Birmingham TV station WBMA. The former city hall building, built in 1938, had asbestos and mold issues.

“Your City Hall is always your gateway because it's the first introduction you get to business and industry so we're excited because now you know when we're going out trying to recruit businesses to our area businesses to our city we have a respectable place to bring them back and conduct that business," Bessemer Mayor Kenneth Gulley told WBMA.