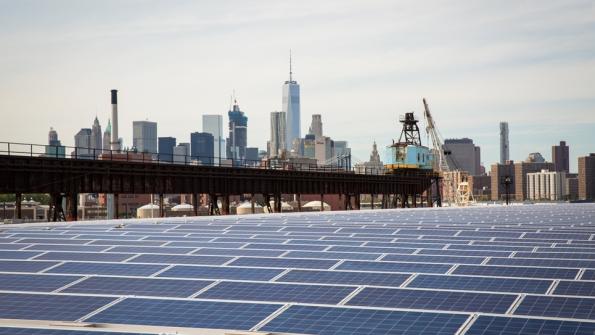 The Brooklyn, N.Y., Navy Yard has completed work on a 3,152-panel rooftop solar array. The site will generate 1.1 million kilowatt hours of energy per year.

The Brooklyn Navy Yard has completed work on a 3,152-panel rooftop solar array. The solar energy equipment on the rooftop of Building 293 is one of the largest rooftop solar installations in New York City. The energy produced by the project is the equivalent of reducing carbon dioxide emissions by 1.4 million pounds and saving 76,000 gallons of gasoline each year.

ConEdison Solutions, a national energy services company, has installed and will operate and maintain the solar installation. The site will generate 1.1 million kilowatt hours of energy per year.

“As a home to 300 businesses and growing, we’re always looking for ways to be greener and more energy efficient,” Brooklyn Navy Yard President and CEO David Ehrenberg says. “The Yard is already on the cutting edge of technology and manufacturing, and with this solar installation, we can now call the Yard a leader in renewable energy as well.

This project was made possible, at no cost to the Brooklyn Navy Yard, as a result of $625,863.83 in funding from the New York State Energy Research and Development Authority (NYSERDA). ConEdison Solutions secured the incentives.

“Solar in New York State has grown 575 percent between 2012 and 2015 and this strong growth continues,” John B. Rhodes, President and CEO, NYSERDA, said in a statement.

The Brooklyn Navy Yard is owned by the city of New York and managed by the not-for-profit Brooklyn Navy Yard Development Corporation (BNYDC). BNYDC leases space in the Yard, promotes local economic development, develops underutilized areas and oversees modernization of the Yard’s infrastructure.