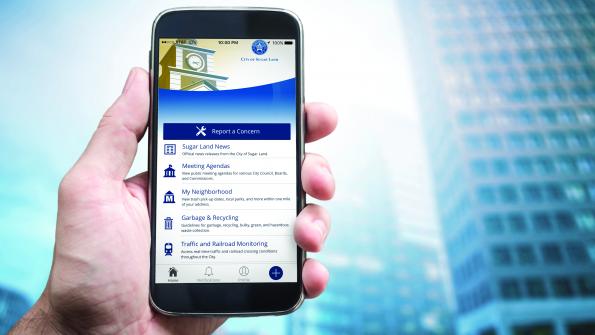 There’s an app for that

To keep up with an increasingly digitally connected constituency, many local governments have released mobile apps that give residents the ability to access a wealth of information with the tap of a finger.

Sugar Land, Texas and Bangor, Maine partnered with third party developers to create their GIS-enabled apps, both of which were released in September 2014.

“We looked at the analytics of what [city webpages] were visited the most, what functionality we think that residents really looked to on our website, and those were the items we incorporated into that design,” Pollicoff says.

Bangor signed a three-year, $30,000 contract with QScend Technologies to create a new administrative console for service request tracking that included the GoBangor app and a new website, according to Bangor Councilor Ben Sprague and Public Information Coordinator Meghan Collins. The app took three months to develop and lets residents report issues to the city with photos and access city news and information. A November update provides access to online streams of Bangor city council meetings.

QScend directly interfaces with Bangor’s GIS by downloading data from GoBangor’s service requests and plotting it on GIS maps, Collins says. “The hope is, long-term, that we can use this data to help make better decisions.”

In contrast, Virginia Beach, Va. self-developed and released several apps beginning in January 2015 that provide unique functionality, according to Virginia Beach Mobile Apps Development Team Lead Chris Golding. A consolidated third-party app would be too bulky and wouldn’t necessarily accommodate all the functionality Virginia Beach may desire, he says.

The city has an app for reporting public works issues and requesting city services, an app for finding information on parks and an app for finding events in the city, among others. The city’s newest app, VB Property, was released in September and gives users information about real estate in the city. The city also lists several third party apps on its site that give users access to other public and non-public services.

Virginia Beach and its apps use Esri’s arcGIS for all mapping, Golding says. The city’s VB Events and VB Park Finder apps plot park and event locations on maps. The VB Property app lets users do a polygon search on a map for properties, while retrieving info on each property in the city.

Golding says Virginia Beach’s apps have seen a “decent uptick in usage,” but the city’s website is still used more. However, 50 percent of the site’s visitors come from mobile, “so we have a good chunk of our users who want to use those mobile services.”

Since the VB Works app’s release, Virginia Beach’s public works department has been made aware of more issues and has been more efficient in fixing them, Golding says. The app also lets public works crews contact the citizen who reported the issue with questions or updates on the issue’s progress.

Last year, Sugar Land’s public works department received about 97 service inquiries per month through the app. This year, it has received about 150 per month, Pollicoff says. Whereas city staff must manually enter information into the city’s work order system upon receiving calls or emails about issues, the app automatically enters that information when it receives an issue report.

Similarly, a GoBangor-sent request gives Bangor employees a code they can use to track the request through the city’s system, while escalating unresolved issues, Sprague says. Service requests through the app and downloads have steadily increased with time, and Collins says about 64 percent of GoBangor’s October users were returning users.

Bangor employees use the app internally as well. City employees report issues through it, while the public works department pulls reports based on issues reported through the app. “They’re using it as a way for maybe setting benchmarks for making sure requests are followed through on,” Collins says.

But Sprague says the app has a non-quantifiable benefit — it gives Bangor a tech-savvy reputation.

“I think… even if people aren’t using it all the time, they like to know that this city is forward-thinking and trying to engage with its citizens better.”