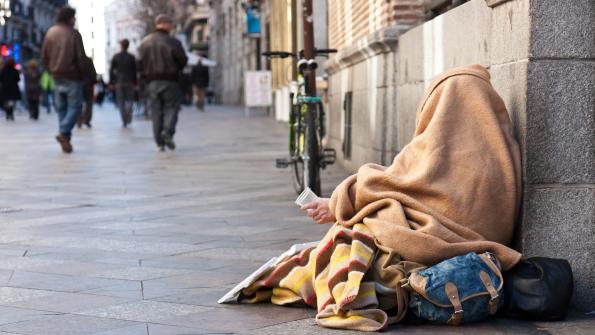 By giving homes to the homeless unconditionally cities and states are seeing remarkable results. However, these programs are often viewed with skepticism despite their successes.

It sounds like a solution a child might offer: How do you end homelessness? Give them homes. Most people would dismiss that answer as a crazy idea, but Utah gave it a try and found that it really works.

Utah cut homelessness by so much that it now tracks the remaining homeless by name — not number. And this plan didn’t break the bank. The state estimates the savings in the millions of dollars. The savings are so great, it doesn’t bother to calculate a total. Over the past 10 years, the program, has cut the number of chronic homeless in the state by 91 percent.

Why the program works

There’s a perception that if one were to give a homeless person a home, they would just waste the opportunity in one way or another. A University of Pennsylvania study, however, found the homeless seem to waste opportunities because they don’t have housing. This 2001 study inspired Utah’s efforts.

The study tracked 4,000 people in New York City for four years — two years living on streets, two years in housing provided by the city. While homeless, they cost the city more than $40,000 for shelter, jail and hospital services. That same amount of money could provide them more permanent housing, comprehensive health care and employment services.

“A considerable amount of public dollars is spent essentially maintaining people in a state of homelessness,” Dennis Culhane, the study’s lead author, wrote at the time.

The idea is the homeless don’t end up in jail because they’re bad people per se. The problem seems to be that all the instability in their lives is a tremendous obstacle that prevents them from making meaningful changes in their lives. The success rate is lower when the homeless have to prove they’ve gotten help before they get housing.

Utah housed 17 people in the first year of its program. One year later, 14 were still in the homes, doing well — a success rate of 82 percent. That rate has grown over time and that’s with a relaxed attitude toward the new residents. They don’t have to get help to live there, but help is available if they want it. Most do.

The state’s program is called Housing First — and the fact that housing does come first appears to be a main reason why the initiative is so successful. Other cities and states provide housing, but no area has come close to Utah’s success rate. Today, there are so few chronically homeless people in Utah that the state knows the names and stories of each one.

The formerly homeless can get mental health treatment, counseling or other services to help them overcome their demons, whatever they may be. Now that they don’t have to worry about where they’ll spend the night, those treatments have a greater chance of sticking. While it’s easy to fixate on the millions the state has saved, officials say this program has also saved lives.

It does take participants a little time to adjust. One woman kept her belongings on the bed and slept on the floor the first few weeks she was in her new house. She had lived with so much disruption that it took that long for her to grasp that the house really was hers.

Despite the success in Utah and New York City, there still seems to be some reluctance to copy or expand these programs — even in areas where these efforts are already working. A renewal of New York’s program, for instance, came down to the wire.

New York began giving housing to the mentally ill in 1990, but there was some concern the program, which now needs to be renewed every 10 years, was going to be allowed to lapse even at a level where there was only enough housing for one out of six eligible people.

More than 200 organizations called on the city and state to renew the program, which was expanded earlier this year. This fourth phase, called NY/NY IV, will create 5,000 new supportive housing units, nearly doubling the housing available in the first 25 years of the program. Still, homeless advocates say that’s well short of the 30,000 units that are needed there.

Washington, D.C., meanwhile, began providing housing to the chronically homeless in 2008 and was on track to essentially end homelessness by next year. Instead, the city’s support stalled after a few years. That support is only now resuming.

Kevin Ebi is editor of the Smart Cities Council’s publications. The Council publishes the free Smart Cities Readiness Guide, which provides help and advice for crafting a smart cities vision, plan of action and method of tracking progress.