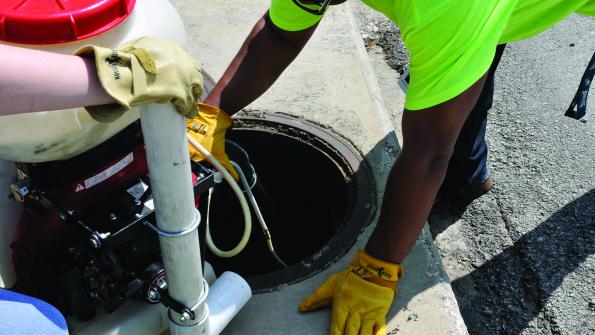 Municipalities combat the spread of the Zika virus and raise awareness with action plans.

On February 1, the World Health Organization declared the Zika virus to be a public health emergency of international concern. Seven days later, the Centers for Disease Control and Prevention (CDC) raised its emergency response efforts towards the mosquito-borne virus to the highest level of activation..

While no cases have been contracted through local mosquitoes in the U.S., the CDC reported 921 travel-associated cases and 13 sexually transmitted cases as of June 29. The Zika virus disease can impart microcephaly, a severe birth defect through an infected woman’s pregnancy, and many who are infected show mild or no symptoms, according to the CDC.

“There is no vaccine for Zika, so the best treatment that we have is prevention,” says Baltimore City Health Commissioner Dr. Leana Wen.

As the CDC continues its efforts, state, city and county agencies are implementing procedures to prepare for  Zika’s arrival while collaborating with each other on such plans.

Richardson, Texas’, plan focuses on mosquito control and public education about Zika, according to Bill Alsup, the city’s director of health. Like many municipalities, Richardson employees combat the mosquito population through trapping and pinpointing mosquito populations as well as spraying infested areas, Alsup says. City employees also dispose of standing water — a breeding ground for mosquitoes — or treat it with larvicides.

Alsup notes that decimating mosquito populations is a far less realistic goal of these programs than controlling the population and mitigating diseases.

“The expectation can’t be that the citizens can go outside and [not] see a mosquito,” Alsup explains. “That was critical in our point of communication with our city management and our elected officials.”

Richardson is also conducting an educational campaign including mailing utility bill inserts, issuing press releases and speaking with civic groups and at community events about the virus.

Many municipalities’ Zika preparedness plans have been prepared in collaboration with other local agencies, surrounding municipalities, state agencies and the CDC which released the latest version of its recommended response plan in June. Richardson’s plan is no exception.

“It all points back to the gold standard of what the CDC tells us… everything we do is really modeled off of that,” Alsup says.

Education and using the CDC as a reference point is also a key component in Richmond, Va.’s Zika preparedness strategy. In addition to mailing materials, the city has enlisted its medical reserve corps to give presentations to “whatever community organization wants to have us,” according to Patrick Holland, the emergency coordinator of the Richmond City Health District, a branch of the Virginia Department of Health.

“Another issue we’re having in the city is the rates of sexually transmitted infections,” Holland explains. “So it’s a win-win for us if we can prevent the spread of [those] and maybe prevent the transmission of Zika at the same time.”

Holland says the city’s health district is training agencies across Richmond on Zika related-issues to prepare for the next stage of the city’s action plan. That phase, which mirrors the CDC’s plan, will be implemented once widespread local transmission of Zika begins to occur.

“This is exactly what we should be doing, is preparing and educating the public,” Holland says. “That is the 21st century public health’s role, is to be prepared for emerging infectious diseases.”

Like other cities, Richmond employees are urging the public to actively dispose of standing water on their property. Miami-Dade County, Fla. recently passed an ordinance to spur its residents to do this at the risk of being fined. One of the ordinance’s measures states that during a public health emergency, mosquito control employees can issue citations to residents who don’t remove standing water from their property within two days of being warned.

“The way the ordinance was worded before, it would take too many days for the correction or the abatement of mosquito breeding,” says Chalmers Vasquez, operations manager and director of Miami-Dade County’s mosquito control program.

Miami-Dade County’s educational outreach has also involved partnerships with public and private organizations, Vasquez and Love say. The county has partnered with nonprofits such as the Healthy Start Coalition to distribute co-branded information. County employees have also conducted Zika workshops with other Florida municipalities such as Cutler Bay, Fla. Love says county employees will soon conduct a training and workshop for hospitality employees through the Greater Miami & the Beaches Hotel Association.

Baltimore is also enlisting the private sector to aid in their Zika-related actions, but the city is enlisting business owners and neighborhood leaders to take part in its Zika Ambassadors program. These ambassadors both lead neighborhood cleanups and educate their communities about the virus,. Wen says.

“We don’t have the staff to be going door-to-door in every neighborhood,” Wen says. “But our Zika Ambassadors are … reaching out to their neighborhoods to talk about Zika, to talk about preparedness and also to, in particular, help our women who may be pregnant.

Baltimore’s plan is especially focused on pregnant women, since microcephaly’s severity far outweighs the Zika virus disease’s other symptoms. The other points of action in  Baltimore’s plan are education, surveillance, immediate response and outreach, while following CDC protocols. Immediate response efforts include spraying, using larvicides and consistent messaging, Over time, Baltimore officials plan to provide over 9,000 Zika preparedness kits, “one for every pregnant woman in our city,” as Wen puts it.

But Baltimore has been “extremely stretched” in carrying out its action-oriented plan. A city representative said Mayor Stephanie Rawlings-Blake set aside $500,000 for the city’s Zika efforts, but Wen says the city is being forced to choose to fund Zika programs over other healthcare-related programs. Moreover, the city has an emergency preparedness staff of only six employees and is about to lose two of them.

Municipalities have felt the fallout of recent battles in Congress over emergency Zika funding and the inability to pass adequate provisions for such funding. Wen recently called this funding an “economic and moral imperative” in a statement.

This hardship is felt even more in cities like Baltimore, as Wen calls Zika a “disease of poverty.”

“It is areas like ours that are chronically underfunded, that are poor urban areas, that are registering a disproportionate burden of health disparity that would be the worst cases for diseases like Zika,” she says.