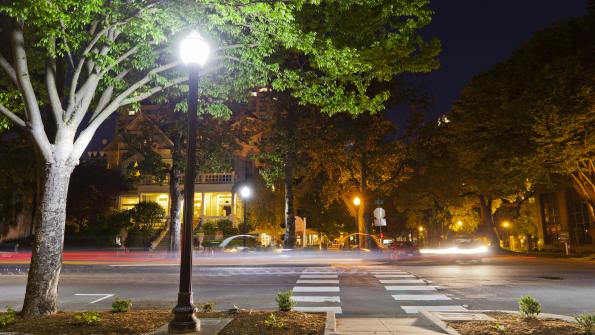 Cities across the U.S. are finding monetary and energy savings by converting their existing streetlights to LEDs.

For years, the orange glows of high-pressured sodium (HPS) streetlights have been a nearly ubiquitous nighttime sight. Recently however, cities have begun replacing them with light emitting diode (LED) streetlights’ whiter, crisper radiances.

The numbers illuminate why. A General Electric comparison of its streetlight products shows that a 100-watt HPS light initially yields 55 lumens per watt, while a 95-watt LED light initially produces 74. LEDs have better color rendering and greater longevity, too— whereas an HPS light has a life of 24,000+ hours of life, LEDs last 50,000+ hours.

“From a maintenance perspective, that’s a really big deal,” says Kam Szabo, Senior Transportation Engineer for Bellevue, Wash’s transportation department, of LEDs’ longevity. “From the quality of light we can give our citizens or residents, that’s a big deal as well, so we know lights are on as much as they should be.”

Between March 2015 and May 2016, Bellevue, Wash. and its local utility, Puget Sound Energy (PSE) upgraded about 4,050 leased streetlights and over 100 city-owned streetlights to LED fixtures, Szabo says. The city also added 138 new leased LED streetlights in the process, a PSE news release said.

A $266,000 Washington Department of Commerce grant financed the majority of the estimated $1.1 million project, which is expected to save Bellevue about $173,000 in energy costs and 1.2 million kilowatt hours per year. Szabo says that those savings, along with about $239,000 worth of PSE rebates on LED fixtures helped lower costs.

Monetary savings spurred Eugene, Ore. to convert about 4,800 of its HPS streetlights — focusing only on lower wattage streetlights — to LEDs between November 2015 and April, according to Eugene Public Works Civil Engineer Patrick Cox. A feasibility study conducted in 2014 proved that savings in electricity and maintenance gained from converting the lower wattage HPS streetlights to LEDs would allow the project to pay for itself in six years. The city expects to save about $12,000 per month in electricity fees.

“It just made economic sense,” Cox says. “Ultimately what prompted us to do it was that it was just the right time for about half of our streetlights.”

While lowering electric and maintenance bills is beneficial, energy savings primarily drove Northampton, Mass. to convert all of its 2,000-plus streetlights to LED fixtures. Scheduled to begin in June once the city signs a construction contract with Siemens, the project is expected to finish in September, according to Northampton Energy and Sustainability Officer Chris Mason.

The city expects the project to pay for itself within five years, with billing and operational savings of about $170,000 per year. Because the city, not the utility company, will maintain the LEDs once they’re installed, Mason says the city will see a large savings in maintenance costs. Northampton is financing the estimated $1 million project through municipal bonds, with utility rebates totaling just under $190,000.

Unlike Bellevue and Northampton, Sacramento, Calif. is relying entirely on internal funds to finance a three-part conversion of all of its 34,000 city-owned streetlights to LED fixtures, Sompol Chatusripitak, Sacramento Department of Public Works Senior Engineer. The first phase, completed between July 2015 and December 2015, converted 10,000 city-owned streetlights to LEDs.

Chatusripitak estimates that the city has been paying between $1.5 and $1.8 million annually in electricity costs for its streetlights, and he expects the complete conversion will halve those costs. He also says that from the first phase alone, about 4 million kilowatt hours will be saved each year.

Sacramento is currently soliciting funds for the project’s second phase, which will convert 13,000 streetlights by late December.

“Now that we’ve learned from the first phase how residents receive the conversion, we also know that there are certain preferences, things that people like,” Chatusripitak says.

Szabo, Mason and Chatusripitak all say that public reaction to the LED lights has been predominantly positive (Cox describes Eugene residents’ reactions as being “a mixed bag”). The most common complaints across these cities concern LEDs’ brightness, which each city has addressed differently. Bellevue has been testing centrally controlled dimming systems on its city-owned LEDs. Northampton installed eight LED lights of four different luminosities, each with a neutral and a warm light. By polling the public, the city is using the LEDs most preferred by residents, which Mason found to be warmer white LEDs.

For its latter two phases, Sacramento is determining ways to reduce their LEDs’ light output. The city is also exploring additional connectivity functionality with the lights—LEDs illuminate using semiconductors, so they can accommodate several Internet of Things (IoT)-like applications. Sacramento is specifically studying Shotspotter, a device that “hears” gunshots and alerts authorities to their locations, and small cell technology that fills in cell service voids.

“The technology, the industry is still evolving,” Chatusripitak says. “But we’re hoping that within the next two, three years, they’ll be mature enough to the point where it’ll be cost effective and efficient enough for us to take advantage of.”