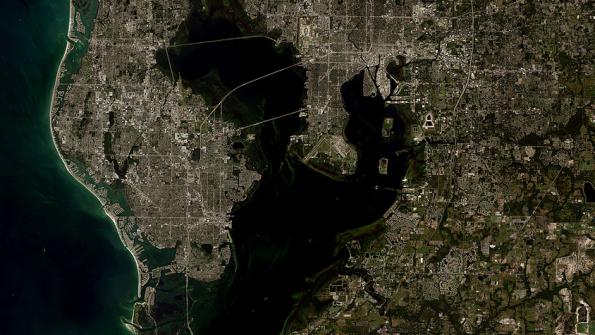 A mix of rainwater, stormwater, groundwater and partially treated sewage was pumped about a quarter mile out into the bay, according to the Tampa Bay Times. In total, about 9.7 million gallons were dumped into the bay.

The effort was undertaken to ease pressure on the city’s sewer systems, to lighten the overload that Tropical Storm Colin caused wastewater treatment facilities in the area, St. Pete Patch reports.

"It is a worse situation to have raw sewage on the street in regards to health and safety and sanitation than it is to release it in the bay." St. Pete Beach Mayor Maria Lowe told local TV station WFTS.

The storm had caused the overflow to bubble up from manholes, and city trucks were placed on some of the manholes to prevent the covers from popping up and washing away, according to WFTS.

"As you try to push more and more water into a pipe that's already full, that water's going to come out some place," Michael Clarke, director of St. Petersburg public works, told WFTS.

This isn’t the first time a Florida city has had to dump wastewater into Tampa Bay. Last August, a 5.5 million gallon overflow of sewage was treated and then dumped into the bay, the Tampa Bay Times reports.

"It was a disaster event. The governor has declared the region a disaster area. An incredible amount of rainfall just overwhelmed systems around the region," Ben Kirby, a spokesman for Mayor of St. Petersburg Rick Kriseman said at the time.

In a statement, Florida State Rep. Kathleen Peters said she has asked the Florida Department of Environmental Protection to “investigate and evaluate St. Petersburg’s infrastructure and capacity to effectively meet the demands of the city and partnering city’s sewer/wastewater demands.”

“Ensuring that cities have effective wastewater management systems is absolutely critical to protect the environment, water quality and public health,” Peters said in the statement.

While the city is permitted to dump wastewater in the event of a certain level of overload, officials from the Florida Department of Environmental Protection will meet with city officials this week to determine if the city overstepped its wastewater permit, the Tampa Bay Times reports.