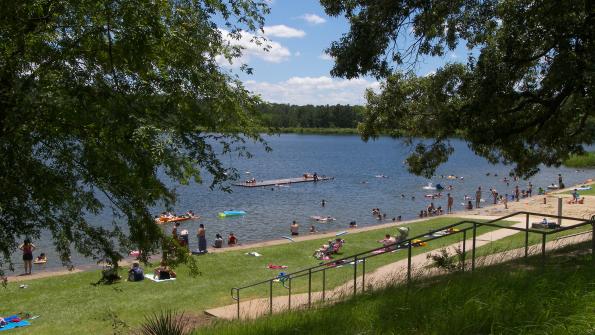 Attendance is trending up at state parks

Attendance in U.S. state parks is expected to gradually increase over the next several years, say NC State researchers who analyzed data for the National Association of State Park Directors.

Attendance in U.S. state parks is expected to gradually increase over the next several years, says researchers who analyze attendance, finance and other state parks measures.  Based on recent trends, annual attendance is expected to hover around 740 million visits annually, say Yu-Fai Leung, Ph.D., principal investigator and Jordan Smith, Ph.D., co-principal investigator. The researchers estimate that state parks will have 736 million visitors in 2015, 736 million in 2016 and 740 million in 2017. The projections cover annual attendance for the 50 state park systems.

The researchers have authored the National Association of State Park Directors’ Statistical Report of State Park Operations: 2014-2015 Annual Information Exchange.” The report covers the period of July 1, 2014 through June 30, 2015. The researchers are on the AIX-Project Team.

The report is available for $350 to commercial organizations and for $30 to nonprofits and government agencies.

Some trends information is also available on the project website.

America’s local and regional public park agencies generated nearly $140 billion in economic activity and supported almost 1 million jobs from their operations and capital spending alone in 2013 (latest year available). When the spending at local and regional parks is combined with that of national and state parks, public parks are responsible for more than $200 billion in annual economic activity.

The National Recreation and Park Association (NRPA) recently released the findings from the nation’s first economic impact report. It identifies and quantifies the economic contribution of the thousands of local and regional public parks in the country.

“We’ve always known that local parks contribute to healthier communities, bring diverse populations together and support environmental conservation and stewardship,” says Barbara Tulipane, president and CEO of theNRPA. “All of these are important contributions to communities and are benefits felt by millions of people. Now, we know definitively that parks are also powerful engines of valuable economic activity and deserve support and recognition from elected officials, policymakers and the public.”

To access the executive summary of the report as well as interactive maps, go here.

Through the site, users can learn about the economic contribution local and regional parks within their own state.