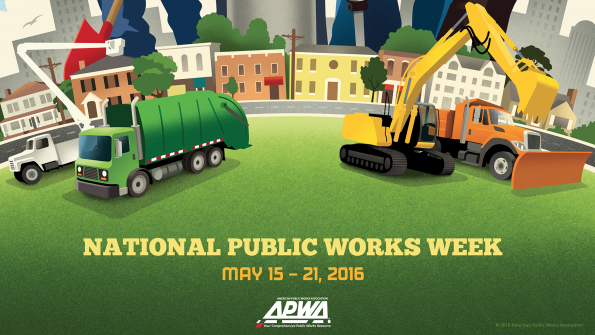 Cities, counties and states across the country are celebrating National Public Works Week, which the American Public Works Association has sponsored since 1960.

Cities, counties and states across the country (as well as some Canadian provinces and cities) are celebrating National Public Works Week, which the American Public Works Association first sponsored as an educational campaign in 1960.

APWA’s website says that the designated week of May 15-21, 2016 is designed to “enhance the prestige of the often-unsung heroes of our society-the professionals who serve the public good every day with quiet dedication." Many municipalities have issued official proclamations recognizing the week, as APWA’s website shows.

You won't believe how many #NPWW posts are coming in across North America! Storify of all posts available here: https://t.co/0VXJGNgZwt

Some cities, like Edmond, Okla., have singular events planned to celebrate the public works professionals who work behind the scenes to better local infrastructure. Edmond will honor these employees with a barbecue luncheon later in the week.

“We have a very dedicated group of employees who continually prove their efforts by providing trustworthy service through continuous improvement. We are grateful to show our appreciation to each of them,” Edmond Public Works Director Herb Blomquist told the Edmond Sun.

Cape Coral, Fla., plans to use the occasion to educate the public on public works-related operations, Cape Coral Today reports. In celebrating the week at an event held Wednesday, the city plans to set up learning stations devoted to a particular aspect of the work that public works does.

Valdosta, Ga., on the other hand, has events open to the public planned throughout the week, Valdosta Today reports. City employees throughout the week will demonstrate various parts of Public Works operations, such as recycling dissemination, using trucks and adopting streets. Similarly, Charleston, S.C. has several events planned for the week, WCSC reports.

The Naval Facilities Engineering Command is even celebrating National Public Works Week to laud the professionals who work on Navy and Marine Corps bases, the U.S. Navy says.

"Our teams work behind the scenes in providing vital public works services such as electricity, water and wastewater management in support of the installations they serve," NAVFAC Commander Rear Adm. Bret Muilenburg said in a U.S. Navy news release.

What is your area doing to celebrate National Public Works Week? Let us know in the comments.