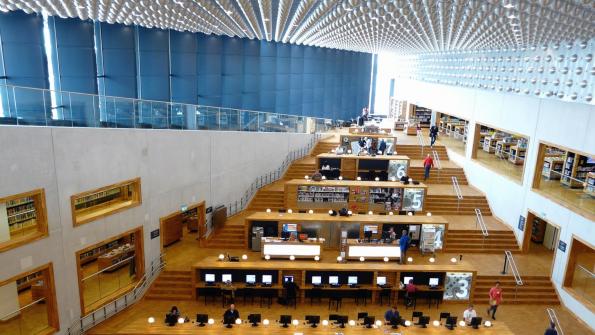 By virtualizing its library desktops and applications and repurposing its existing PCs as desktop terminals with no hard drive, the Community Resources IT team avoided a planned $1.2 million PC refresh and will save $660,000 in PC purchases alone.

Orange County Community Resources is the umbrella organization for all government agencies that directly serve the citizens of Orange County, Calif., including OC Animal Control, OC Community Services, OC Parks and OC Public Libraries. The department’s workforce of 1,370 includes a 25-person IT group that provides shared network, systems, applications and technical support services for all of its agencies. The 33-branch library system is by far the largest consumer of IT services. In particular, the fleet of PCs used by library patrons has been a significant drain on the group’s capital and human resources.

OC Public Libraries operated a fleet of 850 desktop PCs, offering free public access to the Internet, Microsoft Office applications, the library catalog and many other services. While extremely popular, these machines were a major capital and administrative expense for the Community Resources IT team. Some patrons conduct private business on the machines, unaware that session history and other personal data could be at risk. “We spent a lot of energy ensuring that data could not be retrieved by others,” says Clyde Gamboa, director of information technology. “There were a lot of administrative headaches, and we had a hard time controlling our system images.”

So when the time came to refresh the library system PCs, the IT setup needed a more manageable and cost-effective solution.

Gamboa had experience with Citrix XenApp for remote access to business management software, but virtualizing the library PCs posed several challenges. For one, the public machines had to be rebooted multiple times a day to flush browser histories, personal data and system changes. They also needed to integrate with a number of internal management systems. Gamboa learned that the libraries’ 850 public access desktops and an additional 400 PCs for internal staff were good candidates for virtualization via Citrix XenDesktop. The Orange County team opted for desktop and application virtualization with Citrix XenDesktop and XenApp. The implementation was completed in late 2013.

By virtualizing its library desktops and applications and repurposing its existing PCs as desktop terminals with no hard drive, the Community Resources IT team avoided a planned $1.2 million PC refresh and will save $660,000 in PC purchases alone.

The Community Resources IT team reduced the number of desktop images it maintains to just three, with significant savings in administrative costs and workload. “We’ve reduced the time we spend going out to reimage a machine just because a patron wanted to see what he could do to it,” Gamboa says. “When a session ends and a new one starts, it’s a brand-new desktop.”