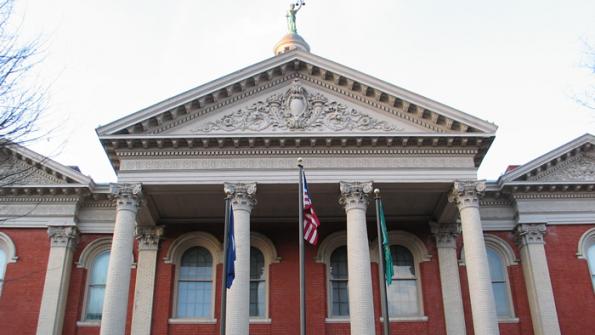 Virginia county goes back to voting basics with paper ballots

A county in Virginia is taking their voting system back in time by replacing its high-tech machines with paper ballots.

A county in Virginia is taking their voting system back in time by replacing their high-tech machines with paper ballots.

Augusta County officials decided to make the switch from direct-recording electronic voting machines (DREs) to paper ballots due to concerns about machine malfunctions, according to The News Leader.

"It is the touch screens you are familiar with, they were designed for 10 year use and we have reached that point," Augusta County Board of Elections Secretary Tom Long told the paper. "We have experienced some glitches in our voting machines. Screens going blank for no reason in the last election."

The optical scanning equipment used to count the paper ballots is projected to cost $350,000, and it could be instated as early as the November presidential elections. However, the board could also choose to start using the new equipment in 2017, Long said.

"Some may think it seems like we're going backwards," Long said. "From the very beginning of DRE they have been criticized for malfunctions and glitches. There is no paper trail. Recounts are meaningless."

Other areas across the U.S. have experienced voting machine issues and solved them by returning to paper ballots.

Machines in some Duval County, Fla. precincts were experiencing glitches during Florida primaries, according to News4Jax/WJXT. As a result, all 199 of the county’s precincts were ordered to use paper ballots until the issues were fixed.

Several voting locations around Chicago experienced problems during primary elections, including faulty voting machines according to WMAQ and the Chicago Defender. In one location at Jesse Owens Park, voters were given paper ballots to vote.

Waynesboro, Va., has already used optical scan paper ballots, and The News-Leader reports that after the city’s polls closed, primary results were in just 35 minutes later.

"It's a lot faster," Waynesboro Registrar Lisa Jeffers told The News-Leader. "It's one machine to shutdown and close out."

Changes have occurred at the state level, too. The Maryland State Board of Elections voted to switch to paper ballots scanned by a machine for early voting and on election day, according to The Baltimore Sun. However, early voting locations will have at least one touch screen available for voters with disabilities.

A state elections administrator said that the voting machines’ counterintuitive navigation tools were what led to the decision to switch to paper ballots.

"The fairest, most viable and reasonable solution is paper ballots," Patrick Hogan, a former state senator who is vice chairman of the Maryland State Board of Elections, told The Baltimore Sun.