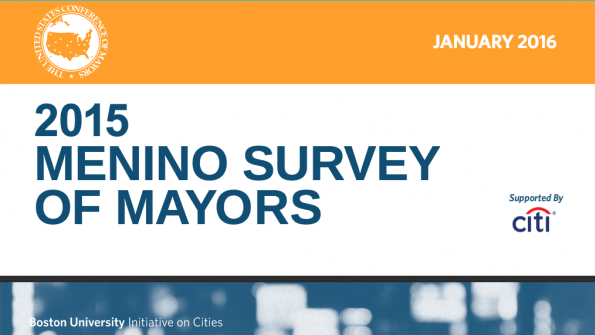 Topping the list of concerns were infrastructure reconstruction, police reform and a lack of federal and state funding.

Regardless of city size or location, the nation’s mayors feel roads need to be fixed, mass transit should be expanded and bike infrastructure bolstered. They also agreed water infrastructure must be repaired, even though state and federal financing is lacking. They also overwhelmingly support the use of police body cameras and civilian review boards.

This is according to the 2015 Menino Survey of Mayors, which aims to define the issues America’s mayors feel are most pressing. Released by the U.S. Conference of Mayors (USCM) in partnership with The Boston University Initiative on Cities, with support from Citi, the survey is the only nationally representative study of American mayors, according to U.S. Conference of Mayors materials.

“While the findings of this study are revealing, they are not surprising,” USCM CEO and Executive Director Tom Cochran said in a statement. “The fact that crumbling infrastructure and policing reforms top the list of priorities only underscores that the fact that mayors are less focused on ideology, and are more interested in getting things done. Mayors know the needs of their residents and they are committed to responding to those needs.”

One way mayors attend to the needs of their citizens is by looking to their peers for guidance. According to the survey, mayors tend to generate policy ideas by looking to a wide variety of cities as examples. New York, Chicago, Philadelphia, Los Angeles, Denver, Austin, Salt Lake City and Boston had an especially high number of mentions in the survey. Additionally, the list of responses included a range of cities, differing in size and location. The survey found a city’s overall prominence mattered less than their ability to come up with innovative solutions.

“The Menino Survey was a great opportunity to bring together mayors from across the country to hear directly from them what they see as the top priorities facing their cities. From aging infrastructure and the need for quality affordable housing to crime prevention and budget constraints, mayors face a common set of challenges that require drawing upon the best of the public and private sectors,” Ed Skyler, Citi’s head of global public affairs and a former New York City deputy mayor said in a statement. “The survey reveals the deep frustration among mayors, who feel they are ultimately responsible for fixing what is broken but aren’t getting the support they need from the state or federal government to do so.”