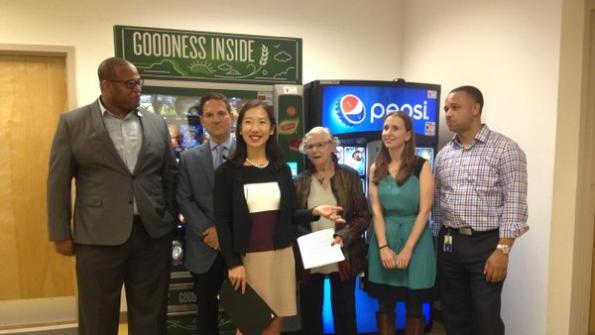 Baltimore City Health Commissioner Leana Wen introduced new vending machines in Baltimore's public buildings last month. At least half of the options in the machines are more nutritious foods, according to the Baltimore Sun. The new standards, approved by city commissioners in August, mirror those adopted in municipalities across 27 states, with California’s entire state passing healthy vending machine laws, according to a Center for Science in the Public Interest (CSPI) study.

In Baltimore, the 1,000 vending machines include baked chips, nuts, granola bars, water and juices that are competitively-priced and without the trans fat of their less healthy counterparts, according to CBS news station WJZ

“If everything that’s in the vending machine is chips and soda, then we don’t have any option for eating better. We want to give employees the option to choose healthier foods,” Wen told the news station.

Improving the types of foods and beverages offered in the workplace contributes to better eating habits and contributes to workers’ weight loss, according to the health department’s reports.

“Today, everybody was bragging, except a little bit about prices. Otherwise, they are really happy,” Miazad said.

Though many cities and counties have begun introducing more healthy options in vending machines, the snack options in government properties across the country are still largely “junk,” according to the CSPI study.

Howard County, which is in the Baltimore metro area, recently adopted the same plan, though Howard County Executive Alan Kittleman had objected to the change. In previous interviews, Kittleman stated that  that Howard County employees could “make their own decisions regarding what they eat and drink.”

Workers may not always choose the granola or baked chips, but having the option could make the difference, Rhonda Daniel, Baltimore health worker, told the news station.

“You figure you want a snack that will boost your energy, but you don’t want to go for the potato chips or the Reese’s [cups] or the M&M’s,” Daniel said.